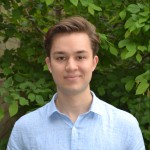 Last Friday, the Innovation Hub’s Summer Team had the pleasure of attending Rotman I-Think’s Celebration of Learning. The event was centered around the incredible work that has been occurring in K-12 classrooms that have embraced Integrative Thinking. The event also celebrated the teachers that helped bring integrative thinking into their classrooms.

I was lucky enough to have the chance to talk to some of the students who presented during the event and was thoroughly impressed with their maturity and ability to discuss prominent issues that affect them. However, there were two schools that stood out to me, they were students who discussed the implementation of a Fidget Room, and a group who discussed a Tier System for their school’s athletic program.

The Fidget Room stood out to me because it was thought up by a team of students who were in grade 4 &5. I was surprised at how easily, and thoughtfully they were able to explain their idea and why it would be an important addition to the school. (This experience forced me to confront some assumptions I had about the quality of thinking young students were capable of). The fidget room at its core is a room that students can use for a short period of time as a break after a long classroom work session. The idea is that the room will allow them to burn off some energy so that when they return to class they’ll be able to focus on their work. They even created their own fidget toys that they believe could be placed into the fidget room! Even after I left their table I continued to think about their idea, I think it was incredibly creative, straight forward and would help to solve issues of focus that many teachers encounter in the classroom. 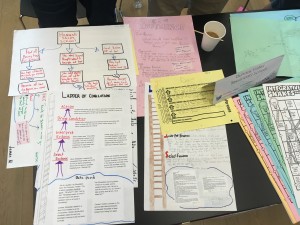 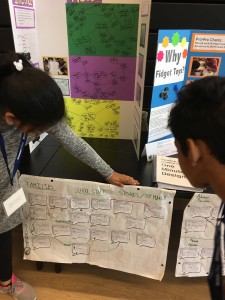 After I finished talking to the fidget group I was able to talk with another group of students who had created a Tier System for athletics in which players of every skill level could be accommodated. This idea interested me because the Tier System has already been adopted in many universities with the introduction of various levels for intramural sports, however, I had never seen it implemented in high schools. This would allow for any student who has an interest in participating to be part of a team. These students have also reached out to older kids asking them if they would be able to coach the younger kids to help alleviate pressures put on teachers who also coach. 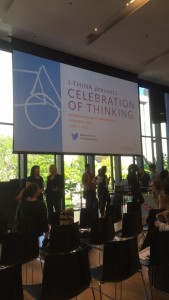 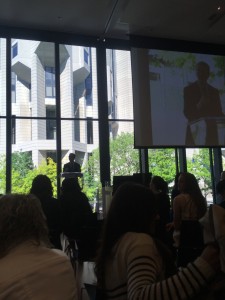 The day also includent a round table Q&A panel between Ontario’s Minister of Education – Mitzie Hunter, the former Dean of Rotman – Roger Martin and our very own Innovation Hub team member Margaryta Ignatenko! The discussion covered how the panelists use integrative thinking in their day to day lives and how the methodology has affected them. The discussion also featured a Q&A period which was fueled by student questions. For someone who is new to integrative thinking the Q&A was a very informative experience and helped shed light on the process.

The entire Celebration of Thinking event was an amazing experience, and as a team the Innovation Hub would like to thank Nogah Fornberg and Josie Fung from Rotman’s I-Think initiative for making this day possible!