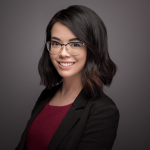 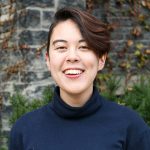 To most people, the concept of Pride can be comfortably captured by the trademark Rainbow flag. However, to many communities that fall under the LGBT+ spectrums, the Rainbow falls short of representing who they are. Co-opted by corporations, printed onto mass-produced merchandise, and generally used to present a singular, unified visual of Pride, many queer* groups prefer to forgo the Rainbow and fly by their own flags. We at the Innovation Hub saw the #DisplayYourPride initiative as an opportunity to represent the real diversity that exists within the LGBT+ community, and decided to paint out some of these flags. Above is a quick video capturing the process. 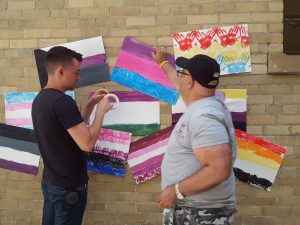 As a group that prides itself on inclusivity, anti-oppressive practices, and continuous learning, we wanted to engage with the Pride initiative in a way that challenged us. Rather than follow the status quo and centre the rainbow theme in our display, we wanted to challenge the idea that the rainbow can fully represent the very dynamic and nuanced diversity of the LGBTQ community. While united in queerness, the community can be further broken down into more specific sub-groups. Oftentimes, many of these sub-groups can face erasure and discrimination at the hands of the larger LGBTQ community, on top of facing such dynamics in general society. In representing their flags, we hope to challenge these dynamics of erasure, and inspire more people to become aware of the true diversity of the community that is often represented by a single flag. 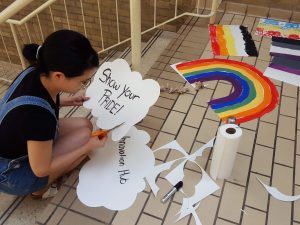 While it would be nearly impossible to represent every Pride flag in our display, we wanted to offer passerbys a glimpse of what Pride actually l looks like to many different LGBTQ communities. No single person on our team was able to identify every flag we chose to represent, so working together to create the display became a true learning exercise. In engaging meaningfully with different visualizations of Pride, we all came to a better understandings of different groups within the community. I believe that this potential for learning is the true take-away from our display and the creation process behind it. Being a good ally- regardless of your own identity- means that you must constantly be willing to learn and grow. Oftentimes, the only way we can do this is by challenging ourselves, stepping outside our comfort zones, and admitting ignorance. At the Innovation Hub, we invite you to see Pride as more than just a celebration- we invite you to see it as a time and space to learn and love.

*While the word “queer” is not unproblematic in its history, it is widely accepted within university contexts as an umbrella term for all identities that deviate from heterosexual and cisgender norms. We recognize that many LGBTQ individuals are not comfortable with the term, but we support the efforts of the university’s queer community to reclaim the term.

0 comments on “What does Pride look like to you? #DisplayYourPride 2018”