Huh? Who/what is Georgie the Bot?

If you were at the Clubs Fair last last Friday on Orientation Day, you may have seen Georgie, the little Student Life robot moving about and handing out informational materials. Look at him standing in front of UTSU’s bubble machine: 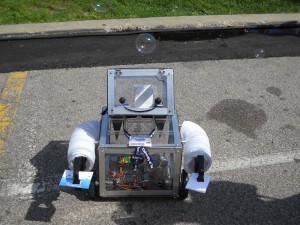 See the amount of cuteness you missed out if you didn’t go to Clubs Fair? (ooh, fun fact: did you know realize that we named Georgie for the St. George campus? He even has a student card!)

Georgie is the brainchild of Cheryl, my co-worker this summer from the internet safety post. Unfortunately, the Georgie Project got too big too quickly, and Georgie faced the very real possibility of not happening.

In my job contract, there was this little gem of a line that said: “other duties may be assigned from time to time”, but never did I ever imagine that I would end up taking over the project and building a robot! However, my contract also said that I was essentially a communications intern, not engineering, so obviously I didn’t have a clue with how to start.

Here’s where my team of engineers from the Blue Sky Solar Car team come in.  Really, it’s interesting how unconnected things in life comes together in the most unexpected ways…

When I was looking at my invoice back in first year (and cringing at the amount of debt I already owed the government), I noticed a peculiar charge of $0.25 for the Blue Sky Solar team. I sought them out online, and traipsed over to their shop to see what the team’s about.

I went into the shop and when I saw Cerulean, the solar car, I basically went from: “Why are you charging me $0.25?” to “OMG, CAN I JOIN THE TEAM PLZ.” Amanda, the Managing Director, welcomed an artsy/humanities student like me with open arms, and I’ve been with Advancement ever since. (Five seconds of shameless self-indulgence: I got promoted this year! I’m Lead Advancement! I have office hours! WOO HOO!)

Anyyyyways. Tangent aside. I continued working advancement (basically sponsorship stuff) during the summer. Every other day, I’d eat my sandwich on the way to the shop during my lunch break to write proposals and call companies for them. So what did I do when I was given the Georgie project? Bring it to the team of course!

Amanda and I pored over my preliminary design and we decided to make Georgie solar powered in addition to battery powered. Obviously, that’s a no brainer given the fact that we’re a solar car team, but we also realized what a cool way Georgie would be to promote sustainable energy on campus. With Amanda’s blessings, I pulled three amazing engineering students from the team to help me out.

Honestly, without Josh, Henry and Rick, I would not have been able to finish Georgie. Josh coded for me even though he was going on vacation after wrapping up a stint with Google; Henry patiently taught me how to saw through aluminum, use a drill bit and grinder, and laminated the awesome solar array you see on top of Georgie’s head; and Rick was the all-round robotics guru who made sure Georgie was designed and made correctly, programmed Georgie’s sensors and motors absolutely perfectly on his first try and even got the Aerospace grad students to let us use their shop.

Gah. I’ll stop before I start gushing. They are so wonderful. Here, pretend I drew a huge heart around the above paragraph. <3

Here’s Henry laminating the solar cells and Rick programming the sensors (and a cameo by a plate of Student Life cookies!): 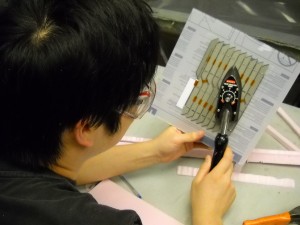 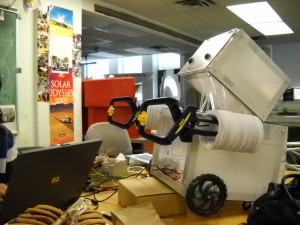 What’s also amazing was the support from DEEP Summer Academy. I originally met Dawn while volunteering with Centre for Community Partnerships, and was so excited to find her as the Program Manager at DEEP. She and her staff not only consulted for us, but gave us Georgie’s wheels, motors, thirty-something rechargeable batteries, clamps for Georgie’s hands, the tubing for the arms, lots of little small parts that made George move, the styrofoam balls for the eyes, and even the black permanent marker to make Georgie’s eyes black! Her supply room is like Santa’s toy shop. There’s everything imagineable and more – there’s even a wall of white glue! (Apparently used to make goo; how cool is that?) It’s an organized, compact version of Active Surplus.

Here’s one of my box of goodies from DEEP: 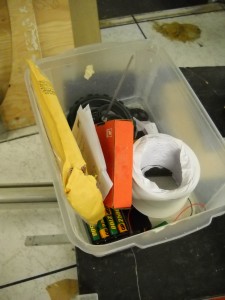 The three engineers and I worked on Georgie over an incredibly tight timeline of three weeks, and on the last 2 days, we stayed well past midnight in the shop testing and debugging. As another tangent, the campus is still pretty lively late into the night, but it feels completely different from the morning. It’s almost serene; very beautiful.

Oh yeah, check out my workspace: 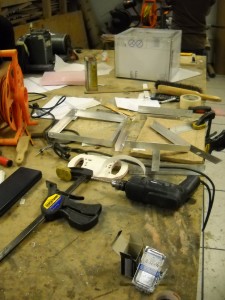 After blood, sweat, and tears (well, not really tears, but sweat definitely, and some blood – Georgie’s corners are surprisingly sharp!) we finished! We even got Georgie’s very first steps on video! I felt like a proud parent watching Georgie move about Hart House Circle during Clubs Fair. Look out for Georgie’s Facebook fan page and Youtube channel coming soon. 😉

Georgie’s first steps at 12:41am the second day before Clubs Fair: 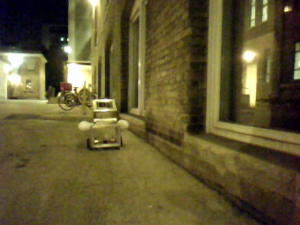 Reflecting back, it’s so cool to see how the people I met during completely unrelated extra-curricular activities came together for this project. You know how they say that joining extra-curricular activities help you with your future jobs? I can’t believe how true that was for me and Georgie. It’s honestly been such a journey and a diving-face-first kind of learning experience, and I’m so thankful that I got a chance to do it.

Finally, a picture of Georgie on the job! 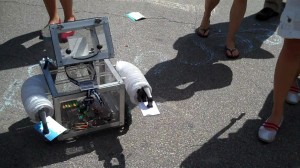 PS: Missed out on Georgie? No worries! He’ll be making appearances all over campus. Come out to see him at the ribbon-cutting ceremony for the opening of Sid’s Cafe this Wednesday, the 23rd from 1:30-2:00!