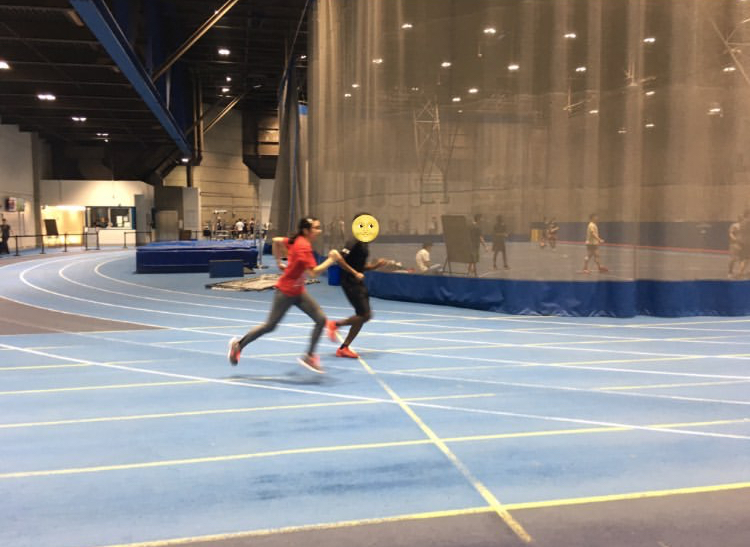 Going Running at the Athletic Centre

I’ve been leaping over one academic hurdle after another these past two weeks. I was sick two weeks ago, and predictably, everything piled up. I wanted a break. So instead of going straight home after lectures to work on my paper, I went to Fit Mix with a friend (it was lovely and transcendental, as always), and the friend asked me to come running with her. Apparently, the Athletic Centre is so huge that it’s got a track inside it? I had no idea. I didn’t know it was possible to run in winter, what with the cold and the slush on the streets. But my friend is a wizard, so she knew, and about an hour and a half after Fit Mix, we were walking into a huge, cavernous space. There was a basketball court was encircled by a track, with various exercise machines and yoga mats along the periphery, so that you ran with the scenery of people engaged in various physical exercises.

I started out at a steady clip, and my friend kept pace with me, while another friend (friend of my friend the wizard) sprinted ahead. After one lap, I slowed down, and let them go in front of me. I ran and jogged and walked seven laps. They ran for eight. I knew at seven that it was probably best if I quit then, so I did.

I thought I might to feel frustrated at my limitations again, running with people who could run much faster and longer than I could. But I wasn’t frustrated. I was happy. I was happy to be running, and I was happy to be running with people whose company I was enjoying, and whose conversation effectively distracted me from feeling any physical strain. It helped that I’d been upfront with my friend about where I’m at, in terms of physical fitness. So I didn’t worry about what costs I might be imposing on her (seeing as she insisted on keeping pace with me part of the time) because I knew she hadn’t been expecting anything different.

I also know her well enough that there was no part of the experience made me uneasy or feel like I shouldn’t be there. While I was jogging on my own, I got a brief flash of what it would have been like to come running alone. It wouldn’t have been nearly as enjoyable, in part because running doesn’t feel as easy and effortless as it used to. I’m working on that. But each time I engage in physical activity, it’s exponentially more enjoyable than the time before- a sure sign of progress.

Overall, running at the Athletic Centre was an excellent use of an afternoon. I recommend it to you, your friends, and also to your pet tortoise. Bring her on a leash. Do a stroll/jog. Sprint if you want, but leave the tortoise out of it.

0 comments on “Going Running at the Athletic Centre”