Now that it’s August, and I’ve got the summer blues, it’s safe to say that school is no longer a taboo topic. With course selection and housing under my belt, it’s time to mentally prepare myself for long nights and even longer Robarts Starbucks lines. Thankfully, before first-year students embark onto the bustling campus streets, there is a grace period. A wonderful medley of amusement and practicality is introduced, in an effort to ease the transition into university: Orientation week.

I started at U of T in the fall of 2016. I squeezed into a cramped car with my mom and my older brother (who was going into his final year at U of T). I said goodbye to the nation’s capital and tried to control my nerves. If I could remember the first day of kindergarten, I feel like it would be a little like that, minus contemplating whether or not to eat glue— exciting, but not knowing what to expect. My mom kept reassuring me that “Everyone [was] in the same boat, and feeling similar emotions to me.” I picked up my orientation kit and dorm key, and friendly upper years in yellow shirts carried my bags to my residence.

The following morning marked the first full day (my favourite day) of the week, as I awoke to music blaring in the quad. In an attempt to give sage older sibling advice, my brother had told me that “[He] met his best friends on the first day of frosh and I probably will as well.” He’s not always right… and when he is I’m slow to admit it, but he was spot in this prediction. I ended up meeting my other two closest mates, Alex and Eugene and we hit it off immediately, and planned the rest of the shenanigans for the week. 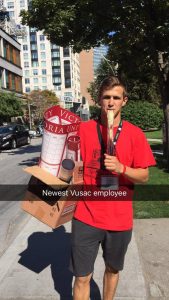 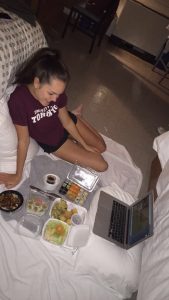 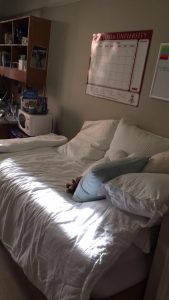 The other orientation days were filled with activities and elegant night time soirées We went on a boat ride around the Toronto harbour, hopped on a bus to the Toronto Brickworks for a dance party and went to Convocation Hall for a ceremony, where in 30 degree weather we were officially deemed Victoria College students! The highlights of the week were the free food, the connections I made, the insane final frosh parade and the clubs fair— I made it my goal to get involved in as many campus activities as possible, so my friends waited by my side reluctantly as I signed up for almost every club’s mailing lists. (I know I’m that keener).

In all seriousness, I had an amazing orientation week! For all you incoming first-year students, hopefully hearing about my experience will make you feel a little more comfortable, because honestly I didn’t know what to expect before I walked up to campus with my suitcases.

Good luck with move in and I hope you enjoy the Mr. Noodles lifestyle! Until next week -R

0 comments on “Orientation Week: My Experience”