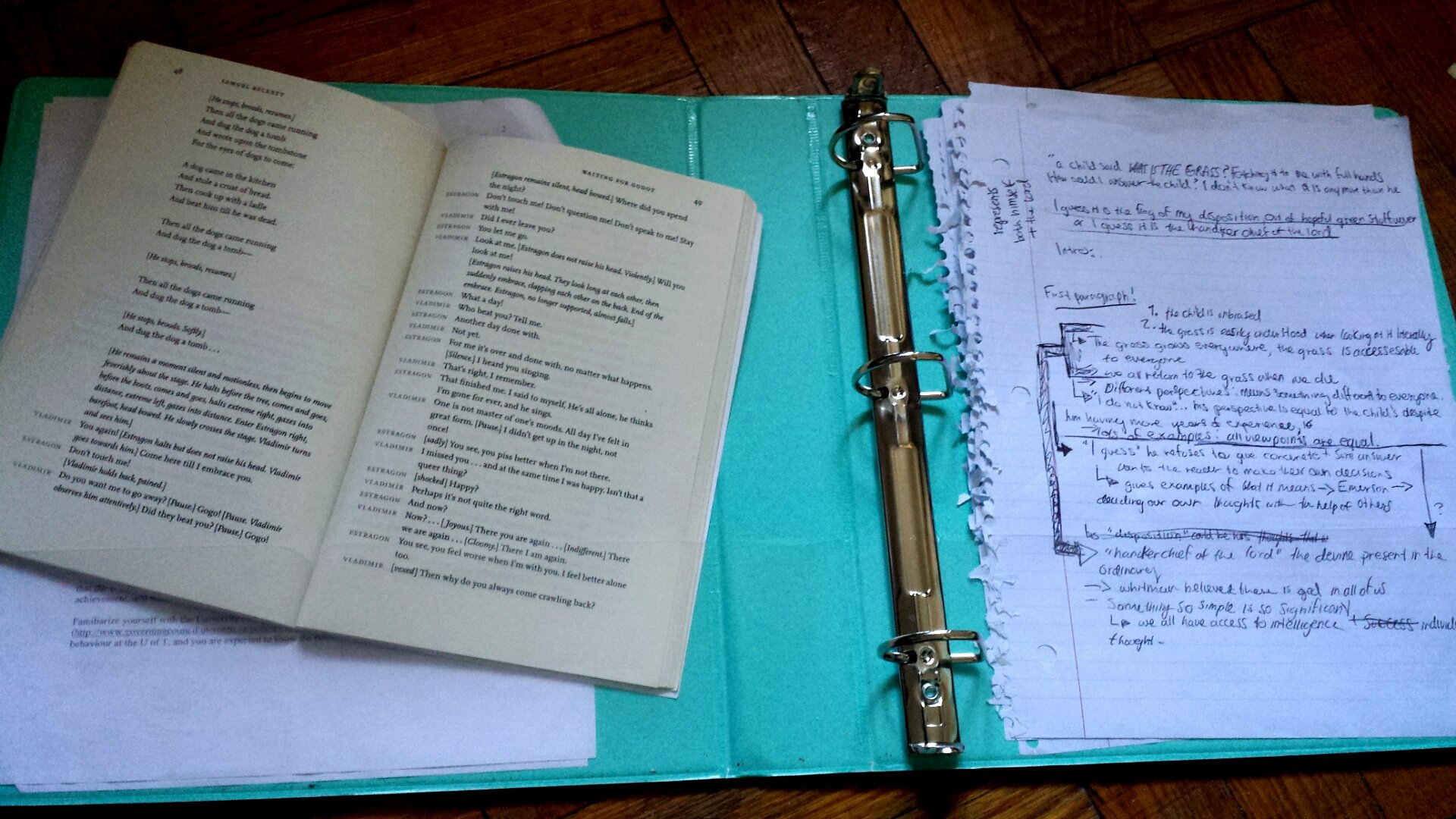 I had forgotten the pressure and anxiety caused by tests, and with two in-class essays, I’m remembering again. The classic thoughts of “do I have carpal tunnel?” and “am I allowed to ask a question?” and “how much time have I wasted staring at the ceiling?” ran through my head, my palms were sweaty, knees weak, arms heavy (I hope you get that reference).

Last week I completed my first two in-class assignments as a university student. Both were essays on the close-analysis of poetry stanzas. However, I approached them very differently. This is  because I learned from my mistakes with the first and carried these lessons forward. My knowledge is biased by the fact that I’m a humanities student, but I’d still like to share what I’ve learned.

With my first assignment, I probably dropped the ball with the most important advice anyone would give. I had been really torn for days about which lines of the poem to analyse, and decided I’d just wing it when the time came. Bad idea. I wasted quite a bit of my allotted time choosing, and then organizing how I would explain the lines. Lesson: make important decisions before you walk through the door. Because I was so occupied with organization of arguments, I forgot to include another aspect of the assignment that was vital to the essay.

I did make sure to do something that made those 30 minutes easier. It was open book (meaning I could have the poem open in front of me), and I could have little notes and interpretations of the lines written in-book, which I took full advantage of. My notes on the meaning of the poem helped me organize my thoughts- but make sure to confirm with your professor that this is okay.

For the second assignment I did A LOT of preparing- most of it the night before, of course. I created a list of the points I meant to make and rearranged their order until I found the exact pattern that best communicated my thoughts. My professor highly suggested we leave the actual writing of the essay to the time of the assignment- but I still felt nervous about encountering the previous problems I had, so I went over what I meant to write in my head a few times. This helped me greatly- even if I forgot the exact words, I was still able to remember my general point. I did spend a lot of time staring at the ceiling trying to recall specific sentences though.

I think my level of stress is what got in my way with the second essay. I was so nervous about fitting everything in with only half an hour that I wrote so fast my hand cramped up and my writing was messy- because of this I had to go through the essay afterwards to correct some unintelligible words, thus wasting more time. I think the best way to solve this problem is to take some deep breaths and remember that the pen will leave a mark even if I’m not pressing down hard enough to send it through the table; a habit I have when I’m excited or anxious. I think I could really benefit from attending those mindful moments seminars, and I’ll definitely be going this December during final’s season.

In the end, even if I was confident in my ideas and arguments, in-class assignments require a lot of technical preparation as well. Now that I know some of the do’s and don’ts, I feel more confident in my ability to form a well thought-out piece of writing in under an hour. Hopefully as the year progresses, preparing and performing such high pressure tasks will become easier. If you have any tips that have helped you through these dilemmas, let me know in the comments!