This week I thought I’d shed some light on how to get involved with physical activity on campus in an administrative role. I met with the MoveU team to talk about what they do, how they got involved and what they love about being a part of the team.

But first: What is MoveU and what does the team do? Well, in their words they “do so much!”

“The breadth of what we do is so broad because we promote health on campus and being physically active,” says Alcina Wey. Fellow work-study student, Naomi Maldonado, adds, “We try to promote physical activity in alternative ways. A lot of people assume that if you’re not working out you’re not active, but we try to make physical activity accessible.”

As volunteers, the MoveU Crew supports and leads events. They interact with students, make them feel comfortable and get them involved at events. 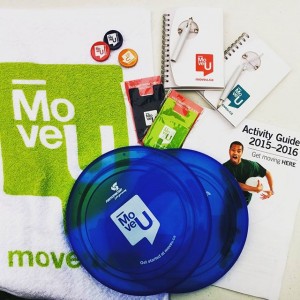 “I was in my second year and wanted to get more involved at school and saw the MoveU posting on the Career Learning Network and thought ‘Why not?’” says Mofe Adeosun, a MoveU volunteer. “The experience has been fun, and I’ve met amazing people and have learned more about myself in the process.”

Her fellow volunteer, Andrea Hung, says she was a little more hesitant because she saw there was a group interview involved, but she did end up applying and is happy to a part of the team!

Another MoveU volunteer, Victoria Agapova, explains why it was MoveU in particular that appealed to her as a way to get involved.  “I was looking to get involved on campus and in something connected to sports and healthy lifestyle because I’m really interested in that. The application wasn’t really long so I decided I’d go for it!”

Gu says her experience has been exactly what she wanted. “I saw the job posting and I was looking for something to be a part of in third year. Being in Arts and Science it’s hard to actually keep in touch with a solid group of people. I’d seen MoveU around, it seemed like a fun thing to do so I wanted to get involved… and it turned out to be exactly what I wanted!”

Wey is the MoveU team lead. She told me a little about how she got started and ended up in her role. “I started off as a volunteer and first heard about it at Brain Break, where I participated in the exercise auction. I thought it was pretty cool. Since I’m in Kinesiology, I’m really into physical activity and health promotion. I liked what my team lead did so I applied for her job and I got it. I’ve learned a lot through this experience and leading many individuals.”

Maldonado, on the other hand, discovered MoveU through the Equity Movement, which works closely with the Crew. “I went to a lot of Equity Movement events last year and I really liked them. I knew MoveU was involved as part of that too, so I applied to both jobs originally. I just wanted to be involved in physical education and I’m also very interested in equity. I interviewed for the position, got the job and I love working here!”

What I’ve gathered from sitting in on some of the team’s meetings is that they’re all very supportive of each other and have become good friends. I think that’s super important and a great plus for anyone who’s considering getting involved. You’ll certainly find friends here! One MoveU member stated, “Teamwork is probably the biggest quality I’ve taken out of this.”

If this sounds like something you’d like to get involved with, keep an eye out for the applications to be posted on Career Learning Network soon!