“Little Victories” and Where To Find Them

You’ll never guess what I got to do last weekend. I took a stunt fighting seminar! We have a Jiu Jitsu regional event every few months and last Saturday’s regional welcomed Lori O’Connell from British Columbia.

It was AWESOME. Best decision I’ve made recently. We practiced different aspects of stunt fighting and then choreographed short stunt scenes and filmed them. I picked up a signed copy of her book When the Fight Goes to the Ground: Jiu-Jitsu Strategies and Tactics for Self-Defense afterward, which I’m super happy about.

Trying new things has been bringing me a lot of pleasure lately. I think it’s largely due to what I’ve coined as “little victories.” Often, when you start something new, it takes a period of a sort-of blind, hopeful dedication before you find anything to celebrate. You have to be patient and trust that the successes will come. In my new aerial silks class, however, we recently agreed that every time we climb up on the silk we get to experience a “little victory.” It’s such a challenge and it feels so good to just attempt it and come out of it with sore arms and a smile. I felt the same about stunt fighting on Saturday, so I’m wondering if the sources of these “little victories” tend to be the uncommon, unorthodox challenges we take on. 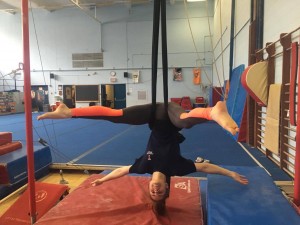 I would take on lots of these challenges — and I’m sure I’m not alone — if it weren’t for the associated cost. Some of the most unusual, awesome experiences to be had are the most expensive to finance. So, in this post I want to highlight relatively accessible, relatively inexpensive adventures to be had on campus and in Toronto.

Well, not yet but between MoveU Fun Fridays and my aerial silks class, I think early excitement is justified. Can’t wait for more little victories!

0 comments on ““Little Victories” and Where To Find Them”