Chronicles of an Amateur Commuter 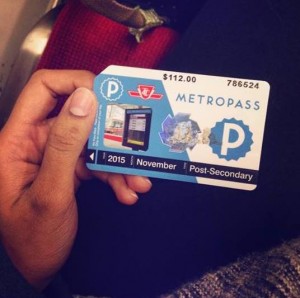 If you answered yes to all or most of these, then using my magical powers of deduction…

you, like me- and roughly 85% of the UofT population- are a COMMUTER!

Which, really, is an impressive thing to be, considering all that we go through- dealing with all-too-frequent delays, navigating through the crowded beehive that is Bloor-Yonge Station, swerving to avoid getting smacked in the shoulder by somebody running to get through the closing doors or bearing the shoulder-crushing weight of a backpack crammed with commuting essentials, including laptop, textbooks (and possibly Tupperware with mom’s homemade pasta). 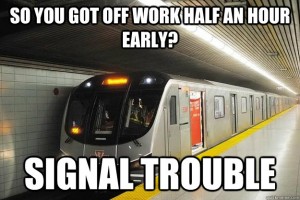 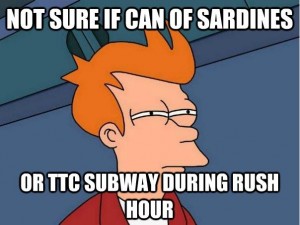 Yeah, we commuters are made of pretty tough stuff.

But back in the summer when I was debating my decision to commute, I really didn’t think I’d be up to the challenge. Fast forward to today.

How have I held up so far?

I’ve only been doing this for three months, unlike many of my seasoned commuter friends and…I’m not going to lie, there have been casualties. Shoes have been scuffed running to catch the bus, countless water bottles have been accidentally abandoned on streetcar seats and most notably, I forgot my beloved patterned blue umbrella on the subway last month.

But now that I look back at the journey(s) I’ve embarked on since the beginning of the semester, there’s a lot I’ve learned so far:

Gone are the days of waking up just before class and walking approximately six minutes to make it on time. Being a commuter has meant that I need to be up and functional in the wee hours of the morning. Since I have to take two different modes of transportation down to campus, my train of thought at 8AM looks a little like this- “okay, it’s 8AM, the bus is coming at 8:30, giving me about fifteen minutes to get ready, ten to eat breakfast and five to get to the bus stop.

Measuring my time out in little chunks has forced me to be a lot more productive than I was last year.

Even when I’m on campus, since I know I’m going to have to commute back home, I try to get as much work done in the time gaps I have between class, allocating my time out as if I needed to catch a bus. It’s really worked wonders for my productivity levels. I hardly even waste time on Buzzfeed anymore! (taking quizzes doesn’t count though, right?)

2. To get more involved

Trying to banish the stereotype of “commuters have no lives”, I got a job with the university that I really enjoy, joined some great clubs working towards causes I’m passionate about such as women’s rights and animal cruelty. It didn’t make sense to me to come downtown just to attend class- I want something more meaningful out of my university experience. Juggling academics and extracurriculars is something I think we all struggle with and I’ve been trying to maintain a balance this year by arranging my schedule so that I have one day with no class that I can dedicate to extracurriculars or job duties. Just don’t ask me about my ‘Manic Monday’ schedule. *shudder*

3.  To explore the city more

The $112 metropass price tag has been a big motivator for this one. Unlimited swipes= unlimited exploring! Here are some of the places I’ve ventured so far.

While I’m still one of those people at the subway turnstiles who is twisted like a pretzel trying to fish her metropass out of her backpack without having to take it off, I have been a lot more organized with my commitments this year. There’s a lot more at stake now- I can’t forget a commitment and make it on time at the last minute anymore.

In memory of Blue Patterned Umbrella.

To conclude my three-month commuting check-in: so far, so good! I mean, I might change my mind on the rush-hour subway back but for now, #commuterandproud

What’s your commuting journey been like so far, U of T?

P.S-  If you’d like to see your opinion help change transportation policy, take a minute to fill out this survey about commuting in the GTA.

0 comments on “Chronicles of an Amateur Commuter”