Where Can I Meet Queer Chicks? A Guide to Making Your FB Relationship Status, “Happy and Healthy”

So, let’s be real for a second: half of the appeal of Queer Orientation is to find other queer folks. Not just because they make fantastic friends, but they also can make fantastic partners (and no, this is not my OkCupid summary). As everyone may know, straight or queer, finding a partner can be difficult. So when opportunity strikes, it is only natural to go for it. Unless, of course, you are like me and totally psych yourself out about even the prospects of meeting that special someone (OK fine, this is my OkCupid summary. Lame, I know, but you have to be yourself on these things!). 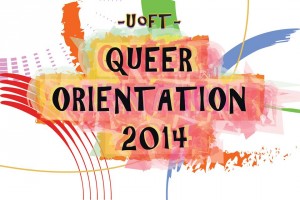 However, from my experience, I want to say this now: just because there are less queer people does not mean that you have to settle for someone less. In the past (and present), I would often say that, “well yes she does voluntourism, but maybe that was just in high school?” or “yeah she is a little insensitive when I say I have to do school, but who isn’t?,” or “She doesn’t watch ‘Keeping up with the Kardashians,’ but that is okay, right?” But at the end of the day, if your interests don’t mesh, they don’t mesh (jokes about that last one- it was really the ‘Rachel Maddow Show’). Frankly, it is better for everyone to say no to that second date than to have a prolonged break-up six months later.

So go to Queer Orientation. I know it can be nerve-wracking but if you want to go, go!

Don’t psych yourself out, because I did when I was in first-year (and second-year), and now I completely regret not going to more events.  More to the point, if you find someone that is great, and if you don’t that is fine too (join me and all the other singles ready to mingle). Honestly, queer orientation is just the beginning, and there are many other ways to meet new people across campus throughout the year. Plus, the queer friends you will meet will likely be there long after that first break-up.

Now, if you do see someone that seems awesome and cool and smart and funny and wears a button-up like no one else, here is a little tip from a fellow young yet older person: start it out right by communicating effectively.

“Right, thanks Haley, I have already heard that before.”

I know, I know, so instead of me saying it, there is this really great blog called “Love like This”  that gets down to this exact point of “asking out.” Now obviously this can be quite daunting, so remain “hopeful and respectful.” For me, I get a little aggressive when I am nervous, and I have found that it can come off as disrespectful if not completely arrogant. To be open and vulnerable allows for an honest response, and not a response that comes out of intimidation (bad way to start a relationship, am I right?).

So starting out open and honest can be a stepping-stone to a happy and healthy relationship status. If you don’t believe me, look at this interactive documentary and see for yourself. Yes, I cried with Cat and Keith.

1 comment on “Where Can I Meet Queer Chicks? A Guide to Making Your FB Relationship Status, “Happy and Healthy””