Healthy Recipes with U of T’s Culinary Arts Club 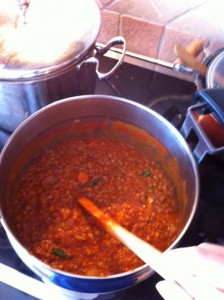 On Friday, Shannon asked for healthy recipes, and I thought, who better to turn to than U of T’s very own Culinary Arts Club!

“I would suggest making chili – Chili is one of my favourite things to eat! It is really healthy and one bowl can really fill you up!” says Jenn, president of the club, “You mix in carrots, celery, onion, and whatever veggies you like. Sauté them. Add chilli powder, salt, pepper, and oregano. Dump beans in the pot (You can use ground beef if you’d like). Some water. TA DA! Chili… Let it cook for an hour or so, and you have chilli for at least 3 days.”

And I thought, you know what, that sounds relatively easy, I want to try making it. I love chili too, so I opened the fridge, chopped up whatever vegetables I had and sautéed it in a soup pot. I followed Jenn’s instructions, and then when the soup was boiling, I discovered I still had half a bag of lentils left, so I poured those in as well. Then I left it be and went to write the introduction and thesis of my essay, and came back about an hour and a half later, when the smell of soup was wafting through the house.

It smelled awesome. I snapped a photo for you above, and I have to say, it tasted SO GOOOOOOD. I ate it for the rest of the weekend, and still have some left over for school today. It definitely is something really easy to make and really filling!

My reaction, according to Jenn, is typical for members of the Culinary Arts club. “We try to make easy things that people can remember how to make – so that when they are in a hurry, they can be like, OH YEAH THAT WAS MEGA EASY AND NOW I CAN MAKE IT ON MY OWN.”

That was indeed my reaction! The recipe for chili is also so easy to remember. I never attempted chili because it looks so hearty and complicated to make. I had no idea that it was, as Jenn says, MEGA EASY.

Jenn started Culinary Arts with her best friend when they discovered that there wasn’t any food club on campus. As a varsity rower, Jenn says that is is really important to eat. She is expected to make a certain weight, and she discovered that eating out wasn’t the best idea as an athlete, so she began experimenting in the kitchen.

“Some foods turned out well,” Jenn laughs. “While others need to go down the toilet, but I feel like food is cool! You can always connect with people over talking about food.”

And that’s how the club has grown so much in a year. Using Facebook, Jenn was able to get people she hadn’t even met to get involved.

The club now has a group of executives who organize different food events on campus every few weeks. Students must RSVP in advance so they know how much food to buy, but most events are less than $5. They host a wide range of events, such as making sushi, dumplings, or themed events like summer cooking or baking. For summer cooking, the club focused on making three items – mushroom burgers, potato salad and brownies. Yum!

So dear readers, any recipes you can share? I’m now on the lookout for food I can make that’s healthier than take-out for exams.