Making sense of the U of T elections

You’ve seen the posters everywhere on campus – Vote for so-and-so!

And somewhere in your subconscious, you probably realized there’s an election coming up at the University. But if you’re like me, you just don’t care. It has nothing to do with you. You’re probably annoyed, too – last semester, there was a period of time when I wasn’t able to study at the cafeteria of Gerstein without getting interrupted by potential candidates who needed endorsement (i.e. student signatures). I signed every single one thrust my way before they could start their 30-seconds elevator pitch.

It’s also easy to get confused. Governing Council elections are on right now, so the campaign posters you’ve been seeing are for that. UTSU General Election campaigning starts at noon today, and campaigning for EngSoc (for engineering students only) starts next week. There are so many different elections and campaigns and names and people telling you to vote for them that you probably could not care less.

It wasn’t until I saw a good friend of mine working tirelessly on a campaign on top of her already crazy schedule that I really stopped to ask, “Why do you care so much?”

She said simply, “because I believe in the candidate running.”

Talking to my friend gave me that push to do some research. I found that a lot of students care about their rights and issues like equity and sustainability but don’t know what to do about it. Voting for the right candidate allows your voice to reach the administration. That candidate can then fight for you on issues ranging from academic conduct, such as using turnitin.com, to freedom of information, such as whether or not professors can put their course texts online to save students money, to what President David Naylor‘s “Towards 2030” means for undergraduates students.

With a newfound sense of purpose, I logged on to ROSI to vote in the General Election. Clicking on “Elections” led me to this page: 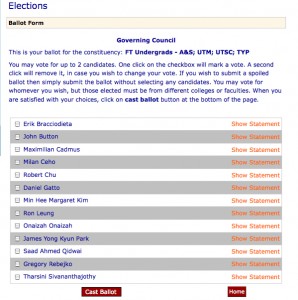 The layout is simple and clean. ROSI‘s already filtered out which constituency I fall under, so I don’t have to think. I just have to vote. I spent the next five minutes skimming through the Governing Council candidates’ statements and for the first time I felt like I was on the other end of the interviewing table, looking at cover letters and resumes. Punctuation/grammar fail? Next. Pretentious sounding? Next. Random Capitalization All over The place? Next. In the end, I was left with two candidates who sounded humble and had relevant experience. I clicked “Cast Ballot” and was told that my vote was cast:

The process took less time than making my TEGA and you know what? Voting felt kind of… good. In the I choose you! kind of way. If voting means the things I care about at the University are voiced, and that the candidate I voted for can have a direct impact during my time here, then the few minutes it took to log on to ROSI, vote and log off was well worth spending.

For your information, the Governing Council elections run until March 12th, and the UTSU one runs from March 16-18th.

In the end, I may not care enough about the elections to actually help run it, or help campaign for it, but at least now I care enough to go vote.

0 comments on “Making sense of the U of T elections”