(Before I begin, dear readers, there was no way I could start this week’s post without a hearty: Oh, Canada! With glowing hearts, oh Canada! *happy, happy sigh*)

Let’s see… it’s 2:38 a.m., you’ve been sitting at your computer since, oh, I don’t know, 4:03 pm, and while you’ve gotten some reading done, you still have seven pages to go on your eight-page paper and zzzzzz…

Must not sleep. Caffeine. Caaffeeeiinneee. You grab a Coke/coffee/Red Bull. You start again, except – borborygmi! – your stomach is growling. You haven’t eaten since 4:03 pm. You reach for the phone, Pizza Nova is on speed dial and you have a coupon left from the print version of the Registration Handbook and Timetable.

Wait. Stop! I don’t know about you, but the last time I had pizza in the middle of the night, I was more tired after downing a slice (and then another, and another, and oh, did I just eat the whole thing?) than before. Well, more like a feeling of fuzziness that makes me want to go straight to bed.

According to a study on the psychobiological effects of carbohydrates done in 1989, eating carbs can cause an increase in tryptophan in your body, and guess what? Tryptophan is used in some over-the-counter sleep aids. What’s more, a carb-heavy meal increases the production of sleep-promoting melatonin in the brain.

I can already hear your objection – pizza and pop are cheap, fast and easy. That’s exactly what I thought, too (well, minus the pop, because I don’t drink carbonated stuff – pizza and tea, for me, but that’s much less pithy and commercial). But I thought that there had to be food that is cheap, fast, easy and healthy.

There are: I really like this list, partly because it said pizza can be healthy as long as it’s whole-grain with lots of vegetables, and also because the list gives a lot of food options.

You can pick and choose from the list, of course, but throughout my few years as an undergraduate, I’ve come to rely on one meal that takes less than five minutes to make. My secret? Canned food and mayonnaise. All it requires in terms of “cooking” is a spoon and a can opener. I’ll be fair, though – this dish isn’t particularly pretty. My mom watched me make it once and she said it looked like goopy cat food. Which, all right, if I ever go on Iron Chef, I’ll lose points for presentation, but I’ll sure score high on taste and originality.

So, let’s get started, shall we?

– one bowl (tupperware* or similar if possible), spoon and can-opener

– one spoonful of mayonnaise (preferably light)

– optional: nuts/seeds; healthy carbs (whole-grain bread slice, crackers, etc); pinch of spice/salt/pepper/herbs; anything else in your pantry you want.

Step 1) If you want toast to go with your TEGA, go ahead and pop it in the toaster now. Otherwise, grab your stuff and set them near a sink. 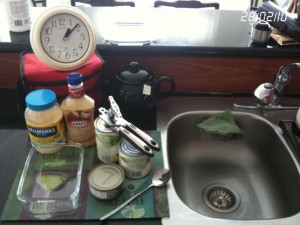 Step 2) Make two holes in the cans and drain them of excessive liquid. 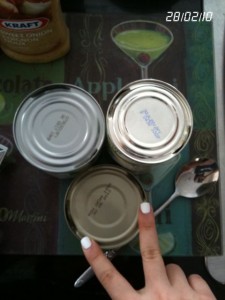 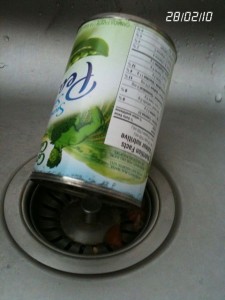 Step 3) Put a spoonful of mayo into your bowl. This comes next because you don’t want to contaminate your jar of mayo after your spoon’s touched other food.

Step 4) Empty the cans into the bowl. See why it’s called goopy? Tuna doesn’t have shape. Step 5) Pour in the desired amount of salad dressing. 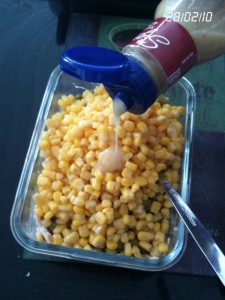 Step 6) Put everything away and throw the empty cans into recycling. Grab the toast if you made it,

Step 7) And you’re done with the hard part! Check out the time – less than five minutes. 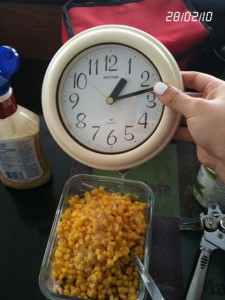 Step 8) Add in condiments and seasonings if you want. 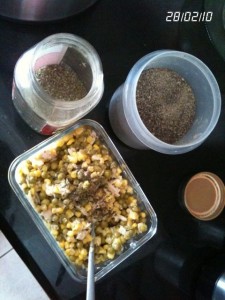 Step 9) Mix the bowl as you’re walking back to your desk. Stick the toast in your mouth if you’re out of hands. * If you can’t finish three cans’ worth of food, no worries. Just snap on the container lid and stick the left-overs in the fridge. Or use less of each canned food when you’re preparing it and put the rest in the fridge for later.

So how well does TEGA fit with my criteria? Let’s see:

Cheap: a can of vegetables is usually less than $2 and you can buy it in bulk, which makes it even cheaper. I stock up when it’s on sale, so sometimes it works out to less than $1 a can. The canned protein is pricier – for example Grocery Gateway lists canned tuna between $1.29-$3.29 – so again, stock up when it’s on sale. Mayo is $3 for a medium-sized jar and salad dressing costs less than $5 a bottle, and that’s if you want to splurge on something fancy. Both of these lasts quite a while. All in all, I would guesstimate that each bowl of TEGA costs less than $3.50, which is cheaper than a small pizza and the stuff from the hamburger/Chinese food trucks on St. George Street. It is more expensive than a cream-cheese bagel, a hot dog and a single cheeseburger at MacDonald’s but it’s also healthier, is in your home whenever you feel like making it and it provides left-overs.

Fast: As you can see from the clock, it takes less than five minutes. Almost faster than placing your pizza order over the phone. It once took me 20 minutes to place my order with Dominos only to find that they don’t deliver to where I was. It was ridiculous.

Easy: If opening cans and spooning mayo into a bowl is hard… well.

Healthy: Ahh, this is harder to qualify. So let’s break things down a bit:

Canned food: The FDA says that properly canned foods are more nutritious than fresh produce since food is canned right after harvesting, maintaining its nutritional content, while nearly half of the vitamins in fresh produce is lost within a few days of harvesting.

Mayonnaise: Mayonnaise is not as unhealthy/dangerous as you may think! Though, I should note that the website is by the Association for Dressings and Sauces (I didn’t even know there was one!), so I would be a little wary of bias. The reason I like mayonnaise is that it transforms a runny salad-dressing into an actual sauce; it’s thicker and more adhesive so it does a better/tastier job holding the canned stuff together. I buy the low-fat kind with the Health Check label.

Salad dressings: They can range from as low as 30 calories per tbsp to 70+ (which is a lot for just one tbsp). In general, the creamier ones pack more calories than the vinaigrettes.

Nutritional value: The following table is an approximation. I rounded to the nearest whole percentage and used the whole-wheat thin crust pizza as the base. Notice they didn’t mention toppings. This is just the pizza without any added stuff, which is not what you’re going to get. Also, the nutritional info available on the site is based on a single slice of medium-sized pizza, not a small slice, but since they didn’t tell me how much a small slice weighs in comparison, and only that a small pizza has six slices and a medium eight, I can only multiply by 6. Still, the numbers there are still on the low end, since, as I said, no toppings. Also, I have to mention that Pizza Nova is sneaky, because their nutritional info is in a pdf where the text is blurry even when viewed at 100 percent, and my eyes hurt from squinting at my screen – boo!

This chart took waaay too long to make. Anyhow, as you can see, everything’s registering high in sodium, but the small pizza beats TEGA in everything except cholesterol. However, considering that it’s the tuna that’s tipping the scale, and tuna is a good source of Omega-3 Fatty Acids, a good fat, I’d say it’s healthier than the cholesterol in pizza.

The TEGA also has a lot less calories. It’s around 21 percent of your average 2,000 calorie/day diet, whereas the pizza is at 36 percent. Also, the TEGA has more protein than carbs, while the amount of carbs in the pizza is exactly double the protein! No wonder I get sleepy after eating pizza! And remember, the numbers for the pizza don’t include things like sauce, cheese, pepperoni and other yummy calorie-filled toppings that might not seem like a lot but can add up surprisingly quickly.

There you have it. TEGA is healthier than the healthiest small pizza you can order from Pizza Nova.

So what do you eat when you need something quick and healthy? Do you have a secret recipe? Please let me know in the comments!

ps: Be honest, how many of you knew all the words to the 90s boy band songs I linked to? What, you missed it? Go back to my post and check out the links. A trip down nostalgia lane, I promise.