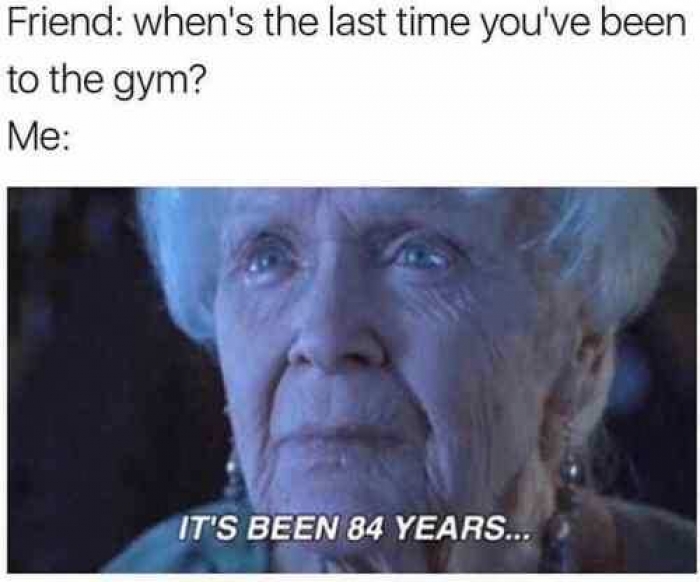 I make no secret about not really enjoying public spaces- there are so many people, it can be pretty loud, and I find it pretty overwhelming. I seriously value my alone time. However, I also love running. It’s a great way for me to work off some stress, and it gives me uninterrupted time to think about anything I want. I really love writing fiction stories, so usually I let my mind wander and plan stories.

At home it’s a little easier. Running in a neighbourhood or on a treadmill in a basement means that, in my head, nobody else is around. Of course, you’ll always run into people in a neighbourhood, but rarely more than once. They see you, you see

them, and then that’s it- maybe forever. That’s the kind of interaction I’m okay with on a regular basis, and when drenched in sweat.

Here, though, things can be difficult. We’re downtown, which means running outside means running past a lot of people, and the only other option is the gym, which also means being around a lot of people. It took me a  long time to build up the courage to run at the gym, particularly because I had no idea what to expect that first time I went. So, for those of you who fear the unknown, tend to expect the worst, or just want to read a not-people-person’s experiences at the St. George gym facilities, this one’s for you.

My first time at the AC was during orientation week in first year, which I remember absolutely nothing from because I was essentially in a constant state of panic. I wish I were kidding. Ever since then, I was too afraid to go back until this year… Yes, my fourth year. I waited four years. And I seriously regret it.

Last semester I took a weight training for women course, which attracted me because it was going to work on upper body strength- something I’ve severely neglected in my years of running.

I very nearly turned around to leave right after I walked in. It’s big, and I could not for the life of me find the change room. Fortunately, I was already dressed.

Before you think “she could have asked somebody…”, know that that is 100% not my MO. Maybe on a good day I would’ve been able to, but I was already overwhelmed by being in a new place and having to face a new class. Inviting conversation with somebody else would be, in my head at the time, asking for a terrifying and regrettable interaction that would keep me awake at night.

Anyway, the class was small, and it was really easy to find the weight room once I had calmed down a little bit. Within a few weeks my head was in the right place to notice that the change room was literally right behind the locker I had been using, and that changed my experience entirely.

It took some time, but going even just once a week for two months really changed the way I view the AC. We even used the track once in the class, and it was not nearly as daunting as my brain was telling me it would be.

What I learned: Things aren’t always as you remember them to be; the way a place seems when you’re already stressed out can be very different from what it’s like when you’re in your calmer state of mind. I used to be terrified of the AC, and to an extent I still am. It’s big, and there are lots of people, that probably will never change. However, if you give yourself the time to adjust slowly, it becomes a great resource. Don’t let one experience dictate the rest of your life. Now, if I find myself wanting to go there, I can.

Compared to the AC, my relationship with the gym at Hart House is vastly different. I took a Tae Kwon Do class there in first year on some whim and ended up really enjoying it. It even made me want to run on the track (which, by the way, is super cool

and gives off very castle-y vibes). For the sake of word limits (which I’ve already passed) we’re going to move past the classes for now and just talk about me trying to work out there on my own.

I remember the first time I went there for a run because I walked one lap around the track and nearly passed out. I had no idea that people on the ellipticals would be facing you, forced to watch joggers pass by if they didn’t bring along something else to look at. I had no idea that, once you get passed the ellipticals, the centre opens up onto what typically is a large group of people either dancing or playing basketball.

Yeah… I left, and I’m still a little embarrassed about it.

I tried again, though, because I either read too much Jack and Annie as a kid, or I never learn my lesson. This time, I checked online to see when it would be quietest. I ended up going around 9 PM, and the experience was totally different.

Yes, there were still people, but there were significantly fewer. Apparently that was all I needed to stay for more than one lap, and I worked my way up from there.

What I learned: Small steps are still steps. It took me a long time and a lot of very short runs before I could stay at Hart House long enough for a 5k run. If I had treated the AC the way that I treated Hart House, I’m sure I wouldn’t have waited until fourth year to go back.

Also, side note: you only really have to interact with the person who swipes your card to get into the change rooms. B+, in my books.

This brings us to the last of the three:

Yikes, even the name sounds intimidating.

This one is a little different, because I’ve only actually been there once- also during orientation week in 2015. I remember being terrified, and overheating because the sun was shining through the windows. I never went back.

This isn’t the end of the story, though.

I’m going to go to Goldring. That’s my New Year’s Resolution, in a way: to not let the things that have scared me in the past hold me back. Plus, Goldring looks pretty and I only hear good things.

Until I get there, I need your help though: We, as a community, use these spaces- I want to learn how the community feels. What has your experience been with the gyms on campus? Which one is your favourite, and why?