Becoming a Morning Person: An Experiment

Anyone who knows me knows that, by nature,  I am not a morning person.

Early mornings usually see me with the functioning capacity of a sloth on sleeping pills.

(Minus those two wretched early class days when I have to be up and ready to commute), I tend to sleep in and then feel horribly guilty for having wasted most of the morning.

Occasionally, ambitious 6 AM alarms are set, complete with threatening labels to motivate me to wake up…. 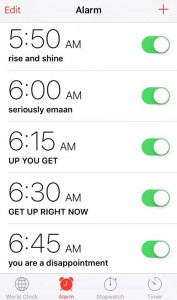 …but with little success.

However, a week ago I was reading a Forbes article (you know, as any sophisticated, intellectual young person often does……lol jk it randomly popped up on my Facebook newsfeed) entitled ‘How to Become A Morning Person.’

Inspired by the examples of several successful early risers such as Margaret Thatcher, Indra Nooyi and Anna Wintour, to name a few, I decided to challenge myself:

And in the true spirit of the challenge, I’ve decided to share the results with you all in an informal diary-of-sorts that I kept throughout the week:

I didn’t intend to sleep so late but after finishing my readings, I rewarded myself with a bit too much of Friends.  An episode or two later, it was midnight. My eyes just would not open when the alarm went off at 6AM…I blindly pressed snooze and slept on for another hour.

I did wake up when the alarm rang….lolled around in bed in a state of semi-consciousness, blearily looked through a couple of readings, questioned my life choices and then finally got out of bed and properly began my rather lazy morning a while later. 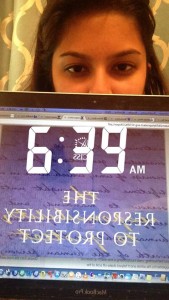 New approach: as soon as the alarm rang, I threw off my comforter and allowed myself to be exposed to the cold. Quickly brushed my teeth and splashed cold water on my face to properly wake me up. I got a few basic tasks out of the way but found that my concentration and energy levels were quite low throughout the morning. I did try to incorporate a little warm-up exercise regimen into my routine as suggested by the article and it helped shake off a bit of my grogginess.

A Skype session with family led to yet another late night and an inability to pry my eyelids open come morning. Cue the all-too-familiar guilt and second FAIL.

I also realized that a power breakfast was what I was missing in this whole equation to keep my energy levels up. 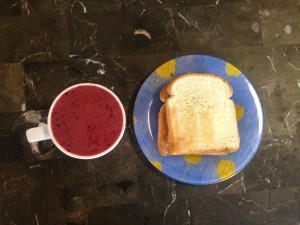 That, along with some upbeat music to start off the day and I was über productive.

Yawn count: 5 (three of which I attribute to my horribly complicated political science reading)

I woke up having pressed snooze just once, finished up two whole chapters of polisci, rewarded myself with some Youtube time and caught up with some old friends for breakfast.

Productivity level: off the charts!

Day 7: which is when I am writing this, I feel pretty good! I won’t lie, I’ve been fighting my natural instinct to hit snooze every morning and I’m still not at the sans-alarm ’natural early riser’ stage but the amount of work I get done in the time I’d otherwise be asleep makes me feel très très accomplished (can you tell I’ve been working on my French this morning?)

Over the course of the week, I tried and tested a few little things to help me be as productive as I could come morning- such as keeping my alarm clock (aka my precious cellphone) far away from my bed, forcing me to get up to shut it off, keeping my curtains slightly open so as to let the sunlight stream through, having a short warm-up routine to wake up, and of course, blasting my favourite upbeat songs to get me in an energetic mood.

Now that this week is over, though, the real challenge will be to see if I’m able to keep this up for the rest of the month! Here’s hoping…

Any other early risers out there? How DO you do it? Share your experiences with me in the comments below!

0 comments on “Becoming a Morning Person: An Experiment”