My Experience Moving To a City Where I Knew No One

Almost two years ago, I jumped on a plane from Vancouver to Toronto. I didn’t know a single person who was going to the University of Toronto, which was super scary. But, after a couple weeks in residence, I realized that moving to a city where I knew no one was actually a great opportunity. 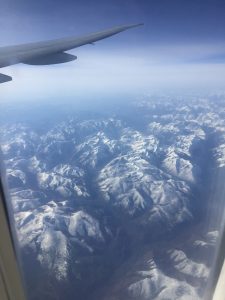 1) I could be whoever I wanted to be.

In my high school, everyone knew who everyone was, and if I had gone to university in Vancouver, those same people would have been there. One of the best things about moving to Toronto alone was that I could be whoever I wanted to be. All those embarrassing high school moments and weird haircuts were long forgotten, and I could start fresh. Once I realized this, moving became an opportunity to start fresh with people who knew nothing about me.

2) Not having friends forced me to make friends.

During frosh week, I didn’t have any preexisting friends to hang out with, like lots of other people on my residence floor did. But, not having any high school friends was also really helpful, because it forced me to step out of my comfort zone. As a person with anxiety, making friends can be really hard, and if I already have friends, I’ll often just stick to them. But, this was a circumstance where I had no choice but to talk to new people.

Even though it was scary at first, I ended up meeting some of my closest friends on the second day of frosh week, which immediately made things a lot better. Also, because I didn’t have any high school friends to hang out with, I could become friends with anyone I wanted. My university friends are a lot different than my high school friends, but had I been with people from high school, I probably wouldn’t have pushed myself to connect with completely different types of people.

3) Being from a different city allows you to connect deeply with people.

Another thing I noticed when moving was that being from a different city allowed me to connect easily with people. Even though it felt like lots of students were from Ontario, I soon discovered that there were a lot of students in the same boat as me. I instantly became friends with a girl from Victoria, BC, because we came from the same province and bonded over how much we missed the rain (typical BC!). I also bonded with some people from America who were also feeling homesick. So, coming from far away actually gave me the opportunity to better connect with people.

Because of all this, I’ve learned that even though moving to a new city seems pretty scary, it’s allowed me to grow as a person and make totally new friends, which completely changed my world around me. So wherever you’re moving from, get ready for an adventure!