It might not be an official government-sanctioned holiday but for us U of T students, as soon as classes ended for the day on Friday-

a much-needed week off began.

Which naturally meant taking in some well-deserved R&R, especially since the weather this weekend was something straight out of Antarctica.

With temperatures plummeting to -30 degrees outside, it made the most sense to curl up in bed with Netflix and snacks and forget about the howling wind and snow.

Three continuous days of this followed and with the weekend behind me, I find myself having achieved nothing other than breaking my own record of how many episodes of New Girl I can watch in a day. I’m done with the lazy life.

I realized I needed a little bit of structure to my Reading Week.

An entire week off class means a week of possibility. A week that I want to make the most of. Some people I’ve spoken to are ten steps ahead of me- there are trips being taken, outings planned, days allotted to particular tasks, and generally, far more sophisticated-sounding plans than just ‘r&r’.

In fact, while we’re on the subject of good organization, good ol’ Google seems to agree that there are certain things a lot of successful people have in common when it comes to spending their leisure time because it pulled up this interesting article for me called “12 Weekend Habits of Highly Successful People.”

(successful being the key buzzword here)

I had a look through the article and found several points that made a lot of sense. (not to mention, it talked about the weekend habits of people like Bill Gates, Oprah and even Jay Z, which, of course, means I am learning from the stars. It just adds a whole different dimension to my week.)

I’ve already chronicled my morningtime struggles in a previous blog post and thanks to that little experiment, have found myself tuned to wake up at a decent hour every morning (8:30 AM is decent, right?!). Though that’s nothing on Robert Iger, the CEO of Disney, who reportedly rises at 4:30 AM every morning.

Studies show that we’re most alert two to four hours after we wake up and I’ve found that to be the best time to ease myself into the productive mood to get things done. (which include two essays and upcoming tests to study for. Woe is me.)

While this may seem like the exact opposite of being productive, I’ve noticed that the longer my (often-extensive) lists are, the less likely I am to get things done. Allotting two big tasks to an entire day instead of a dozen small ones keeps me focused and feeling more accomplished when I can draw big ticks next to what I’ve completed. Thanks for the tip, Timothy Ferriss!

I took a bit of a break from social media by removing a few non-essential apps from my phone. (here’s looking at you, Snapchat.)

Weekends are when “we’re even more prone to FOMO”, the fear of missing out. Which, according to CEO Randi Zuckerberg, we should be turning into JOMO (the joy of missing out) and remember the saying that goes, “there is nowhere I’d rather be than exactly where I am.”

Taking a bit of a breather from knowing exactly what the rest of the world is doing gave me more room to focus on myself and be happy with how I was spending my time.

4. Scare myself into getting work done.

Which may or may not consist of pinning the April exam schedule to my bedside, looking at other peoples LinkedIn profiles and reevaluating all my professional experiences (or lack thereof).

There’s nothing like fear of the future to get you motivated.

And I don’t mean just course readings. I’ve almost forgotten how much I love reading novels and poetry because I usually get my fill of words from hundreds of pages of required readings. This week, I’m going to crack open a new novel, inhale some of that beautiful fresh-book smell and lose myself in another world among the pages.

What better time to keep up my resolution to explore the city more than during my week off?

I’ve already gotten started on this one-

I visited a beautiful conservatory, checked out some street art and paid a visit to the Power Plant Contemporary Art Gallery. 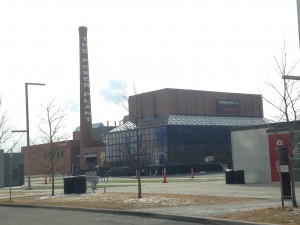 How are you spending (or planning on spending) your time off?

Let us know in the comments below!

0 comments on “Reading… During Reading Week?”