Shall We Go Out to the Theatre?

Last week I went to Hart House Theatre to see the play Bone Cage. Written by Catherine Banks, it’s a picture of Canadian youth, chilling, sad, funny, and poetic. It’s one thing to be a Canadian youth, another to see my fears and anxieties played out on a stage. But that is neither here nor there, and we shant be saying another word on it, shant we! The important thing is that I went out to a U of T event (#tryitUofT What events have you gone out to recently?)! 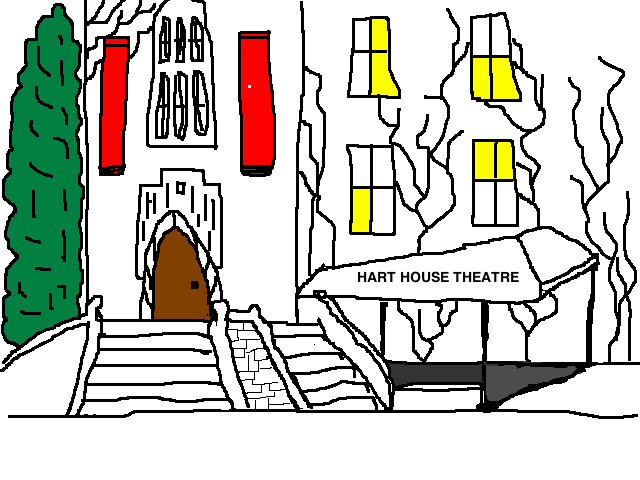 Does everyone know about Hart House Theatre? It’s a little bit like the Isla de Muerta, in that it cannot be found except by those who already know where it is. Well, not exactly. It’s just below the main entrance. Right there!

Constructed in 1919, the Hart House Theatre is truly a gem of the university. As a nationally recognized theatre it showcases the work of new and established playwrights, while maintaining a strong devotion to Shakespeare. In high school I saw Macbeth at Hart House, featuring at the end (spoiler alert) Macbeth’s severed head. Fifteen-year-old me was very impressed!

Hart House Theatre also offers a lot of involvement opportunities for students, whether it’s casting calls, paid job positions, or on-going volunteer openings in the theatre. In February, Hart House Theatre will host the U of T Drama Festival, a week of original theatre written, produced, and performed by U of T students. Apparently Donald Sutherland got his start right here on the Hart House stage. Look there he is!

Well, maybe it’s not him, but I like to think it is. Either way, he did get his start right here at U of T. So if theatre is your bag then you’re certainly in the right place!

Hart House is just one of many outlets for theatre enthusiasts at U of T. There are also the college drama societies and groups:

Trinity College Dramatic Society will be performing Steve Martin’s Picasso at the Lapin Agile in November, an imagined encounter between Pablo Picasso and Albert Einstein in which they chat about genius!

VCDS is currently holding auditions for Jean-Paul Sartre’s No Exit. I read this play in first year philosophy and it rattled me, yep, like a snake!

New College’s New Faces is at it again with IMPROV sessions every Tuesday! And I’m sure they’ll be bringing something to the 2014 Drama Fest.

And the UC Follies are concocting another year of . . . well, everything from sketch comedy to live radio plays!

All of these societies, groups, and companies are hoping that YOU will audition, volunteer, or at least (if you’re an old geezer like me) come out a show and enjoy the magic of U of T’s theatre life!

‘Til next time, youths and younglings, stay diamond!

0 comments on “Shall We Go Out to the Theatre?”