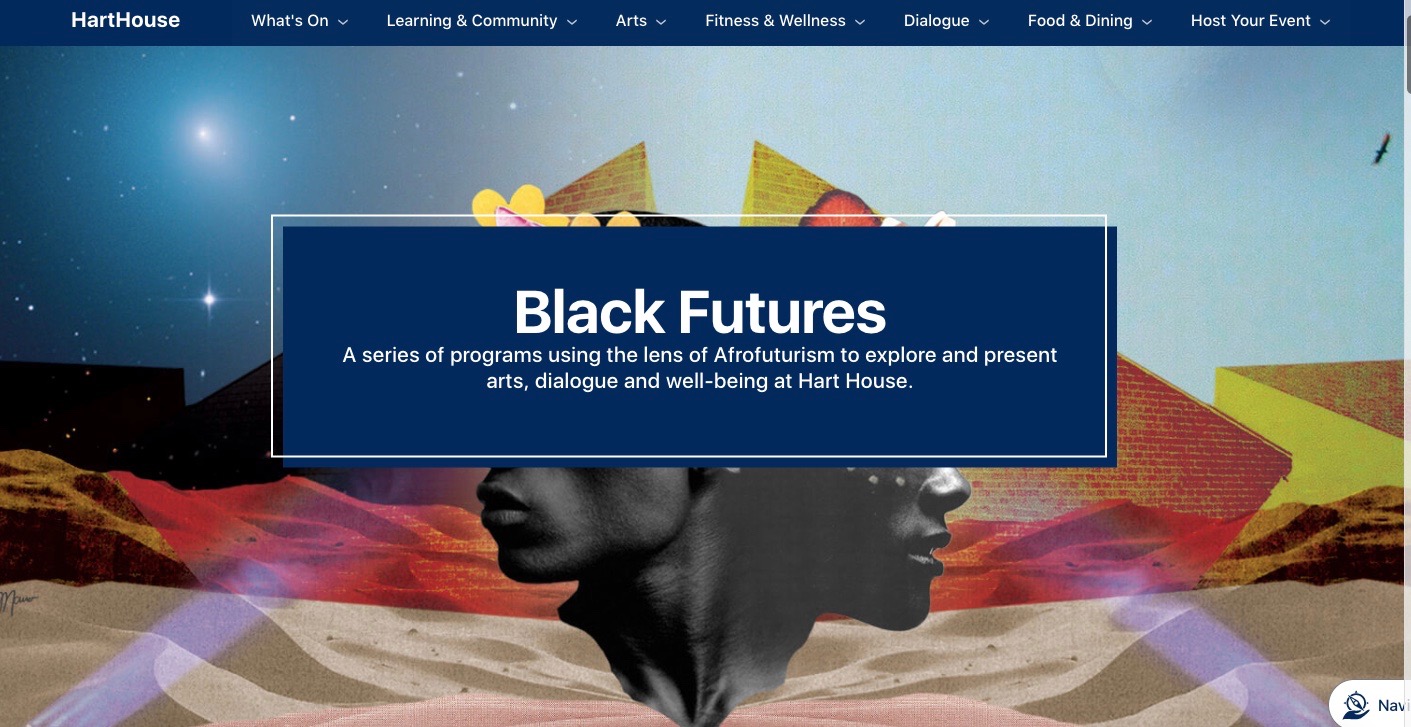 In honour of #BlackHistoryMonth, this week I checked out the Hart House Black Futures series and wanted to tell you all about it.

The Black Futures series is run through Hart House, and uses Afrofuturism to “explore and present arts, dialogue, and well-being at Hart House” (quote from their website).

For those that don’t know, Afrofuturism explores the future of the African diaspora, often through a technological lens. Afrofuturist themes are presented throughout philosophy, literature, music, movies, and more. One well-known depiction of Afrofuturism is the Marvel comic and movie Black Panther, which explores a fictional African nation in a science-fiction, futurist context.

I was excited to see that Hart House is producing such an interesting series and giving a platform to academics and artists exploring these concepts. I was also happy to see that the Black Futures series is fully accessible on-line. I was able to fully immerse myself in their programming from just visiting their website alone.

Their site was divided into featured content which I could access on the spot and information about upcoming, live programming. I started by listening to a featured podcast of an interview with Stephanie Chrismon, who is an Afrofuturist writer and educator. It was fascinating to hear Stephanie talk about the importance of seeing different narratives in visual culture and also about the complexities of Afrofuturism, as technology has been used to both marginalize Black communities and as a tool of Black resistance. She also talked about the connections between Afrofuturism and Black history, explaining how Afrofuturism converses with Black history through exploring technological advances and science-fiction worlds alongside historical African cultural traditions.

There were also many interesting artists featured on their website. One was Randel Adjei, a spoken-word artist who recorded a short video about hip hop and curated an accompanying playlist that I listened to exploring black futures through hip hop. I also watched a recording of a poem by Afro-Indigenous artist Mahlikah Awe:ri, which came from a previous live event they had hosted.

Second, their site has info on all upcoming events part of the Black Futures series. The Afro-Dance workshops, which are being hosted every week for the rest of February, look super fun. I’ll also be going to the Black and Indigenous Futurisms panel, which has some amazing speakers. Here’s a list of the events you can go to for the rest of this month:

Whether you’re interested in going to one of these events, or just checking out some content on their website and learning more about Afrofuturism, I definitely recommend the Hart House Black Futures series!