Soul on Ice Film Screening: Past, Present and Future of Black Hockey Players

Was anyone at the Soul on Ice screening last week? The Faculty of Kinesiology and Physical Education (KPE) partnered with Hart House to put together a free screening open to students and community members of Soul on Ice, a unique documentary about the past, present and future of black hockey players.

I was a little hesitant because I’ve never been a hockey fan, nor do I know much at all about hockey. The screening took place at the Goldring Centre for High Performance Sport in the Kimel Family Fieldhouse – it was my first time standing in this stunning space, and now I’m eager to check out a Varsity game there in the future.

Your MoveU team was there, directing people prior to the start of the film. 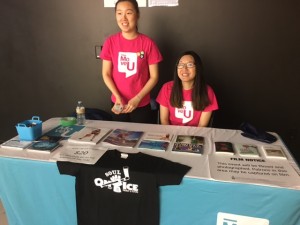 Terry Gardiner, Assistant Manager of Diversity and Equity at KPE welcomed everyone and introduced the film, which was played on what I imagine is usually the scoreboard. 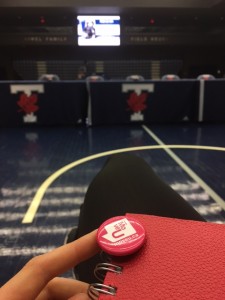 Chris Rock kicked it off with what I found to be a funny quote. “Black people dominate sports in the United States – 20 per cent of the population and 90 per cent of the Final Four… Basketball, baseball, football, golf, tennis, and as soon as they make a heated hockey rink we’ll take that…too.”

Turns out, the Coloured Hockey League was the first organized coloured league, before the Negro Basketball League. Black hockey players aren’t new to the sport by any definition. The Coloured Hockey League actually contributed to the way the game is currently played in the NHL. It was in that league that goalies were allowed to get down on the ice to block a shot on net. The NHL adopted this later on.

The film featured interviews with many black NHL players, past and present, as well as coaches, community members, and officials. Some names you may recognize are P.K. Subban (I sat next to his sisters at the screening!), Mike Marson, Val James, Wayne Simmonds, Devante Smith-Pelly, Joaquin Gage, and Grant Fuhr. They spoke of the challenges black hockey players faced. It was appalling!

It wasn’t long ago that snipers were at hockey games to protect a black player from getting shot. The players would receive death threats! Fans, officials, even their own coaches and teammates referred to the black players with the N-word. “Spook! Spook! Spook!” was heard from the stands. Those featured in the film reflected on the bravery it took to be a black hockey player.

William O’Ree (first black athlete to play in the NHL) expressed just how ridiculous that was, wondering, “Why a black man should have to be brave just to follow his chosen profession…” Filmmaker Damon Kwame Mason revealed later that O’Ree cried upon seeing the finished film in Washington, D.C.

And what about Jaden Lindo? Despite injury and adversity, he was drafted to the Pittsburgh Penguins.

Following the film, was a brief panel discussion featuring Kwame, Heather Lindo (mother of Jaden Lindo) and Darren Lowe (Varsity Blues Men’s Hockey Head Coach, first black Olympian to play for Team Canada and quite possibly, the first black university level hockey coach). The panel reflected on some of the issues portrayed in the film, what it takes to support an aspiring black hockey player, but also on the role of women, often seen as the backbone of those players.

Kwame summed up the theme of the night well, saying hockey is Canada’s sport and the sport should reflect what our country looks like.

0 comments on “Soul on Ice Film Screening: Past, Present and Future of Black Hockey Players”