While I’ve always enjoyed coffee, lately it’s become an unfortunate life-force, as I’ve quickly discovered I am not the 0.1% of the sturobotdent population that doesn’t need to sleep. This shouldn’t be surprising considering the only all nighter I’ve pulled to date was for the royal wedding, and I had opted for coffee’s more bubbly companion to help me trek through. Missing sleep is hard to do, and lately it seems the only way to makeup for all of the hours I need is through a coffee every few hours. The enjoyment has now shifted into a full fledged dependency. My name is Vahini, and I am addicted to the bean. 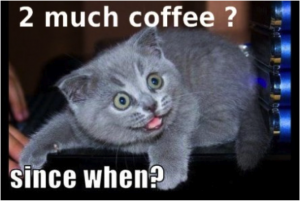 Caffeine withdrawal is a real thing, and not just because mednet said so when I anxiously googled between shivers and groggy eyes. When I cut it cold turkey, it ended up being the worst of days, as I was falling asleep on the hour every hour, and incredibly cranky, and an anxious mess. And not the end of the semester kind of anxiety, this was inexplainable, at least until I had figured (or rather stopped denying) that the amount of Joe I was consuming and then suddenly not consuming must have sent my body into a weird shock.I also couldn’t sleep, even though my eyes wanted to for the entire day – the cruellest of consequences. And I was starting to feel sick.

The worst part was, this was only coffee I was dealing with, and I had simply assumed that as a longtime coffee consumer, I wouldn’t be affected by the symptons of withdrawal.  While I’m still unfortunately depending on coffee – public service announcers everywhere are shaking their heads at me, I know- as soon as the semester is over, I’m definitely going to reduce my intake to the suggest 300mg of caffeine max…I hope. Otherwise, this cannot end well, but the first step is admitting you have a problem right? (The solution to which I am still on the hunt for).