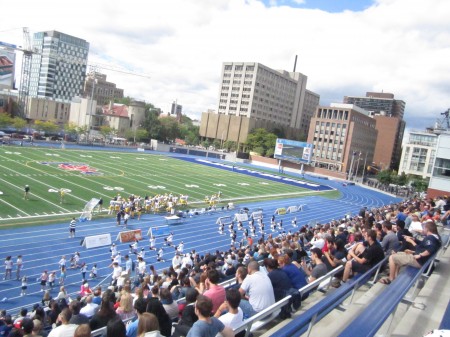 Some families are really into soccer, others baseball or basketball. With my family, our sport is football (the American version).  We play backseat referee, quarterback and commentator every Saturday. That’s right, Saturday, not Sunday is game day at my house. While the NFL does capture our interest from time to time, our passion lies within NCAA college football.  Now this isn’t a random obsession: my dad studied at a school known for its NCAA football program. As a result, we follow that team and college football quite closely.

So, clearly I come from a background of college sports and spirit. With this in mind, I headed to the Varsity Blues game this past Saturday. Would the game and atmosphere live up to the hype? Having gone to the game, I can tell you it didn’t dissappoint.  The stands were pretty full with people and spirit. Now granted this isn’t the U.S. with its 50,000-seat stadiums and network deals, but it was still pretty awesome.  Unfortunately, the Blues fell pretty hard to Windsor, losing 55-4.  But the boys in blue still played pretty hard.

There is a misconception at U of T surrounding our athletics teams. First, there is the misconception that all our teams suck. This is far from true, a lot of U of T teams do pretty well in their sports and even though the football team has struggled over the past decade, they are making a comeback — but progress takes time.  U of T won a championship in 1993. Don’t think we can’t do it again.  Another thing that isn’t really understood by students is how much of a time commitment being on a Varsity Blues team is. Students on Varsity Blues teams have to balance daily practices with classes, a commitment that is pretty demanding.

If they are willing to put in the time to represent their school, do you think we should take the time to go out and support them? Often U of T students complain about the lack of spirit on campus. Well, why not indulge in some U of T spirit by going to a Blues event? You don’t have to go often, but I think all students should at least go once a year, or at the very least once during their university career. You don’t even have to like sports really, cheering with your friends and your fellow students is a memorable experience it itself.  Plus, it’s free with your T-Card.

I’ll see you at Varsity Stadium. 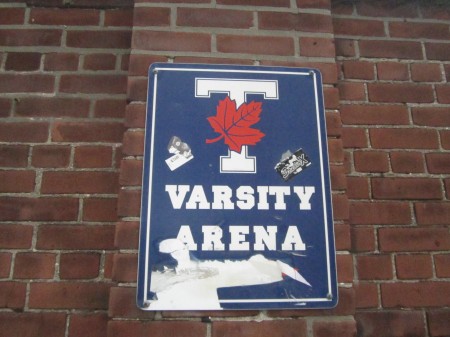