The days got shorter and the weather’s getting colder everyday.  I’ve already worn my ski jacket, wool mitts and unfashionably warm toque. So, in the true spirit of winter, and to continue my commitment to staying active, this week I decided it was time to hit the ice. 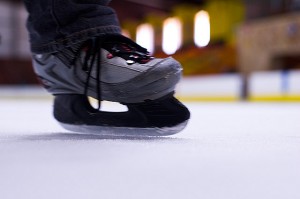 I checked out the drop-in recreational skating schedule online and decided to head over to Varsity Arena on Monday from 2-3pm for a free skate. Now, I am not an expert skater and was a bit nervous of embarrassing myself, perhaps losing control, perhaps wiping out. Sure, I’m from Ottawa. I’m no stranger to the annual skate on the canal, but my repertoire of moves is pretty limited: “the forwards skate,” “the stop,”  “the backwards skate” (sort of) and the odd “forward cross-cut” (only possible when I really concentrate).

When I got to the rink and started lacing up the skates I’d borrowed from my grandma, I saw the range of abilities on the ice and knew I’d be fine. There were almost 20 skaters, a mix of staff and students, young and old, male and female. A few were in the centre of the ice, practicing some impressive-looking figure skating spins and jumps, but most were doing laps along the boards at various speeds. Some skaters, like me, were there on their own, while others went as a group to get a bit of exercise and hang out with their friends.

I came across a former figure skater and fourth-year commerce student named Amy. She told me she regularly comes to skate on her own during the 12:10-1:30pm Friday sessions for the nostalgia of being able to participate in an activity she loved when she was younger. This Monday, however, Amy convinced her friend Ally, a master’s student in biological anthropology, who had never been skating at Varsity Arena, to join her. With a smile of regret on her face, Ally said that she probably wouldn’t have gone if her friend hadn’t convinced her, but that she had fun and would go again.

Then I met a law student named Vince. He goes skating at Varsity Arena three times a week. As a former hockey player, he prefers getting his exercise at the rink, doing an activity that he enjoys, as opposed to working out at the gym. “Ice is nice,” he told me.

Similarly, Erica, a master’s student in public health, who had figure skated for 16 years, goes skating every Monday.  Erica told me she goes to the rink to clear her head, manage her stress, and most of all, to indulge in her love of skating. “I call it my happy place,” she said with a sigh.

After chatting with these students, I was inspired by how they all manage to make skating, something they are passionate about, a priority. As I left the rink that day I noticed a poster for an event that might be a good way to see if you still have, or might discover, a similar passion. “Skate ‘n Create” is happening on November 25th. 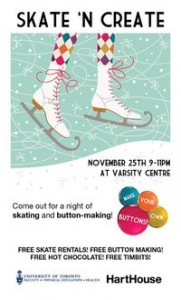 It’s a night for the crafty and the active at Varsity Arena next Thursday from 9-11pm. There will be free skate rentals, free hot-chocolate, and free Timbits: a great opportunity to get to the rink, especially if you don’t have access to your own skates.

I won’t be able to make it until after my Tae Kwon Do class, where we have been applying the kicks we have learned to different “attack” and “defense” situations, but hopefully I’ll see you there after!