There’s something about the onslaught of February that leaves me feeling a little haggard. Maybe it’s that, in thinking of the month, I automatically conjure images rife with salty sidewalks and grey mornings, brown snow and assignments piled high in the waning mid-afternoon light; or maybe it’s that the cumulative lack of sleep and sunshine start to take their toll around this time of year. Whatever the reason, I was recently delighted to have my preconceptions trampled upon and thrown to the curb, new visions flooding in. Like those from a Robert Frost poem, the new February was one filled with downy flakes, animal tracks, horse bells, and white pine branches laden heavily with snow.

For all this new imaginative fodder, I can thank U of T’s Outing Club. The Outing Club, a registered non-profit corporation established in 1957, is an organization consisting of about 250 members. Much like it sounds, the Outing Club does outings – nature outings – in all seasons, and throughout Ontario. Some of their events have involved weekends spent hiking through Killarney, day trips to Dufferin Quarry, or (what really caught my fancy) a snowshoeing trip through Algonquin Park.

The club owns a cabin located on the Niagara Escarpment, about 160 km from Toronto. The cabin, a two-and-a-half-hour drive from the city, was built (and is still maintained) entirely by volunteers. It has no electricity, no plumbing (outhouse adventures!), a wood stove, and sits serendipitously right next to a spring which provides year-round water. The cabin is located within 30 metres of the Bruce Trail and within 16 kilometres of Georgian Bay, on 45 km of one of the best cross-country ski trails in Ontario. It also neighbours downhill ski slopes and equestrian stables.

As a student, faculty, or staff member, anyone (including your family) can join for an annual fee:

Memberships can be purchased year-round, until after April 1, when they’re reduced to half price. They’re obtained by filling out one of the club’s membership forms, which can then be mailed or dropped in person (9-5 on Mondays) to the University of Toronto Outing Club:

What’s great about the Outing Club is that while nature, camping, and cabins in the woods are part of a fairly distant reality for many students (we’re so dismally broke), the Club makes these things accessible. Further, not everyone who is interested in camping feels comfortable simply slinging a tent over one’s back, packing up a box of matches, and setting off into a dark expanse of forest for 72 hours. Going on UTOC trips, therefore, provides members with the opportunity to experience nature and the outdoors. Finally, UTOC also provides a wintery reprieve, complete with windswept trails and bushy-tailed red squirrels, from the depressing reality popularly known as February in Toronto. 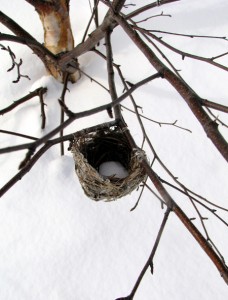 2 comments on “UTOC: Snowshoeing, wood stoves, outhouses, and other adventures.”