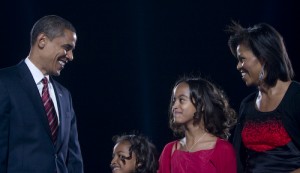 …and not just in term of skin colour. They’ve got a Mom, two girls and a Dad, like mine. The only difference is that their Dad is going to be the next president, and mine did not live to see Obama get elected. Dad was rooting for him too; we’d have the TV on CNN often and shared a collective disdain for Sir Dubya. Mom often jokes that she would have liked to see Dad’s reaction to Sarah Palin, which I imagine… well, I can’t imagine it. Her presence was too incredulous even for me. The entire election would have been fun to experience with Dad, as it was so ridiculous. The days before January 20th will most likely prove to be just as, or maybe slightly less ridiculous… CNN continues to speculate the President Elect’s next moves and banter about his daughters’ outfits and what school they might be attending (if anyone is smart, they won’t tell us this).

On November 4, my sister turned 26, and we went to Red Lobster to celebrate. My mom, my sister and I joked and talked as we usually do, with me occasionally knocking things over by accident. My sister was a little perturbed that the election was on her birthday, since a bad outcome could cast a shadow over the numbers 11 and 4 for years to come. So, I mentioned Obama as much as possible to bug her. We ordered dessert and got the waiters to sing “Happy Birthday”, before which ensued a debate over whether we should get them to say “Barack Obama” instead of her name. I hesitated, and my sister was like, “Hey, it’s up to you, but you have to ask, like, NOW.” “But, but… uhh… hmmm…” This went on for a bit until our annoyed Mom snapped, “Liesl. Her name is not Barack Obama,” and I broke in half laughing.

In the car on the way home, we listened for how the election was going. I was terrified; how close would it be? Would McCain win by a mere 100 votes because some young people got lazy?

“And your U.S. Election update; Senator Obama leads by (ridiculously large number), McCain stays at (the same number as before).”

That, I did not expect. The last eight years instilled in me little to no faith in American politics, and here they were, voting decisively for something different*. Watching CNN at home, with their hologram technology (I thought they were joking), it looked as if there was no way the Republicans could take it. Holding my breath on that, I looked away from the TV for two seconds when the CNN analysts became too talkative. I looked back up and saw “PRESIDENT ELECT- BARACK OBAMA”

Worldwide celebration. Jesse Jackson weeping. Partially, on my part, panic. I want to see this guy and his family surrounded by seventeen bodyguards on a daily basis. And what if, after getting the youths all riled up, making them vote 66 per cent for him and only 31 per cent for McCain, after making us feel like things might get better, after convincing us of how awesome he is… what if Obama turns out to be a jerk? Pushing that aside, I ran downstairs and woke Mom up from her usual evening-on-the-couch slumber, and began to erratically jump and point. After the initial happiness, I began to miss Dad and silently excused myself into the kitchen.

Apparently, somewhere on campus, there was a large screen projecting the election and students went crazy. And the sad part is this; years ago, when I was a child, I would have found absolutely nothing fascinating about people in Japan, Germany, France, fellow students of all races and ages, people of everything and every place rooting for a black (or technically speaking, mixed) guy. I am now somewhat fascinated and moved that people of all different races and ethnicities wanted Obama to win as badly as I did, and I shouldn’t be. We’re all in this together, and humanity is humanity. Why should that be something to marvel at?

Moving from elementary school, to high school, to university… the scope of society you interact with is constantly widening. You will eventually leave that tiny circle where love is just love and your friends at recess could care less about your skin colour because they know you. You will get to a giant, faceless campus within an even bigger city and run into people that have never spoken to others of certain ethnicities before, and they will judge you. Even after a black president is elected, they will judge you. But, somehow, in the grand scheme of things… god, what am I talking about? Universal love between humans conquers all?!

Disjointed emotional reflections must stop here. The only reason for this post is that a historic moment took place, and it must be documented albeit in a girly, mushy musing.

Arbitrarily, here’s this, this, and this.

For the POLI SCI kids: Association of Political Science Students, albeit I see no upcoming events.

U of T United Nations Society

I’ll be checking out at least one of them. Eventually.

*Ha ha you thought I was going to say ‘change’.

5 comments on “The First Family Now Looks Like My Family”