Chris Berube (host of 89.5 CIUT’s Electric Boogaloo, fourth year U of T student and all around fabulous personage of the most stellar kind) offered me free cake.

This is a picture of him right here. 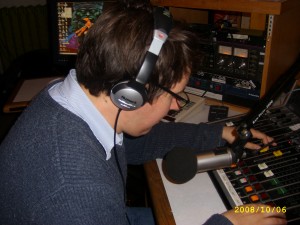 For those of you who do not click links and listen to podcasts wantonly, I’ll give you a little prepatory description of what’s at stake here: “An eclectic mix of folk, pop, electronic and experimental music and vocal clips.”

It’s pretty cool, and I can say this with conviction because You Say Party We Say Die were on this show on Oct. 24th and I, at the moment, am convinced that this band is cool/edgy.

Anyhow, someone out there might be wondering how I got close to anything so interesting.

Rest assured, there is a perfectly logical explanation.

CIUT, the University of Toronto Community Radio station (nestled [for now] in that quaint little building on 91 Saint George Street), held their semi annual ‘Friends of CIUT’ fundraiser last week (that is, Nov 3-9).

The staff in this place is small, so volunteers a-plenty were relied on to help out.

This kind of thing happens regularly (fundraising, that is) because CIUT is listener supported, and relies largely on listener donations to function since it doesn’t pick up huge amounts of cash via commercial advertising, as most other stations on the dial do.

Picking up phones, taking pledges—these were the tasks required… but some hosts, such as the above mentioned Berube, went out a little bit extra.

As a result, some facebook invitations were sent out…

“Are any of you possibly available to come by on the 7th and:
a) work the phones
b) appear on the air
and
.
.
.
c) eat some delicious cake?”

Is it bad that it was the mention of cake kind of sealed the deal for me?

It was in fact a delicious cake, all full of chocolate-y goodess and not stale in the least, and when I showed up on Friday for the 12:00 show, there were also party hats and noise makers to make the atmosphere all the better.

Yes, there were others there, yes they were all cool, and definitly, we were probably the best live studio audience ever: full of enthusiasim and perfect in our dictation of the number to call to donate to CIUT.

Finally, I think I have to conclude this by saying the following:

– a thanks to Chris for the cake and the goodtimes

– a double thanks to the people who donated

– a hearty good luck to our electric Boogaloo host on making that pie he promised as a prize to one special winner.

-a congratulations to myself for reading a typed list of prizes on air with such professionalisim, nay, panache.

It was a good way to spend a Friday afternoon.