A Time to Sleep

When I was a kid, my parents used to have the hardest time trying to put me to bed. I was a night owl. I had an arsenal of tactics that I would use against my war with bed time. I was definitely no stranger to the ‘five more minutes’ argument, nor was I shy about feigning ignorance and claiming ‘I didn’t hear you’ while putting on my best pout. I think my favourite strategy was hiding from my parents as soon as I knew bed time was coming. It was like getting to play a game of high stakes hide and seek with opponents who had a deep hatred for the game, oh the adrenaline. It was such a bonus: I got to force my parents into a game of hide and seek AND stay up later than my bed time, especially if I found a really good place to hide. My antics definitely did not go unnoticed by my siblings. I was the poster child for bad bed time influence. Looking back, it surprises me how many sleepovers I was able to secure in my childhood.

Fast forward to today. I love sleeping. I love sleeping in the middle of the day. I love sleeping in random corners of different libraries. I love sleeping when I’m having a long, one-sided, phone conversation with my parents, who are speaking at me about things that I don’t hold any particular interests in. I just love sleeping. With my love for sleep, I also love getting to bed no later than 1 AM because I do tend to get up early in the mornings. These days, I generally play a game of hide and seek with friends of mine who often try to rope me in to late night obligations. If I’m found, well, I’m no stranger to using the, ‘I’ve got a thing early in the morning’ argument, or the ‘I didn’t see your text’ excuse. Yeah ‘bad friend’ alert, I know. It’s surprising that I still get invites to parties that I know I’ll probably be the first one to arrive at and the first to one to leave, because no one leaves before midnight…except for me.

So what is the significance of all of this? Sunday night was the first night this semester that I could not avoid pulling a complete all-nighter. Generally, my all-nighters at least leave room for catching a couple of hours of Z’s. Sunday night left no room for any beloved sleep whatsoever. Surprisingly, I was still able to function throughout the day. I had to work on Monday morning and was cognizant of the risks of not having complete access to all of my mental faculties. I think this awareness of needing to be aware, gave me a deliriously heightened sense of awareness. I say deliriously because my ‘awareness’ felt foreign and superficial. After work, I had an evening class and surprisingly I stayed fairly focused throughout the lecture, but my note taking capabilities definitely suffered. I ended up finally going to bed at 9:15 pm, and it was glorious. I dreamt of cupcakes, unicorns, and rivers of milk chocolate…I’m lying. I was so tired, I don’t remember dreaming about anything at all. Just blackness. Pure, unadulterated blackness. 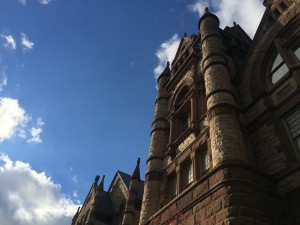 University is a rollercoaster ride. As much as we try to stay ahead of the game, eventually work catches up. All-nighters, from my experience, though not an every-night event, are common enough. For me, Sunday night was inevitable, and I take comfort knowing I was not alone in that misery. I hate all-nighters because they tend to lead me into questioning what I could’ve done better: a horrible rabbit hole to go down. But, I can’t always be on top of my game and I can’t ignore that there’s value to learning from these situations because lived experiences provide the best lessons. Now that I’ve broken my all-nighter seal, with two more essays and three midterms to complete before the end of the semester, I think I’m in pretty good shape. I actually can’t believe that my semesters first complete all-nighter happened this late in the game. Huzzah for me!

0 comments on “A Time to Sleep”