Trying new things (in my stomach)

In my first blog post, I made a summer goal to experience new parts of U of T. It’s easy to settle into a routine, and this is most readily apparent for me when it comes to food. I always try and bring a lunch with me to campus, but when I don’t I usually frequent the Sid Smith Spring Rolls or just head over to the Tim Horton’s on College. Even after four years at U of T, there are food places that I’ve just never tried, no matter how many times they’ve been recommended to me. For this week’s post, I decided to fix that by trying out three new-to-me campus locations for lunch.

First up was Harvest Noon, which specializes in local, sustainable and organic meals. The 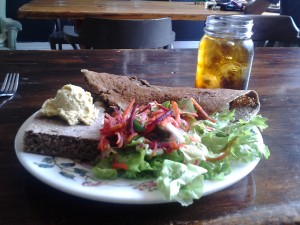 cozy space is located on the second floor of the Graduate Students’ Union building, and the food is extremely compatible with a student budget, coming to $5 for a full plate. I had buckwheat flax crepes stuffed with maple-glazed root veggies (mostly potatoes and carrots), a salad and some bread. It was amazingly delicious, and combined with the peppermint iced tea I sipped out of a mason jar, was refreshing and energizing. And bonus: the meal was vegan and gluten-free! I’d heard that this place was amazing from so many people, and I can’t believe it took me so long to actually confirm that for myself. 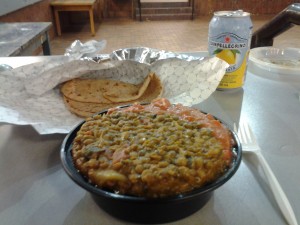 The next day I headed over to Veda, an Indian take-out restaurant in the basement of Sanford Fleming. For $7, I had a bowl of rice and two kinds of curries (lentils/spinach and butter chicken for me, though there are many options!), as well as a side of naan bread. The portion was generous enough that I had leftovers, which I consumed at my desk mid-afternoon since I was craving the taste again.

On day three, I landed at The Exchange in the new Rotman building. They do an all-day 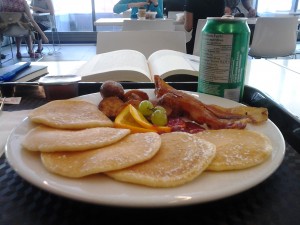 breakfast, so I opted for some buttermilk pancakes that came with potatoes and bacon. Who doesn’t love all-day breakfast? Especially for only $5.50. They also have a pretty fancy system that you’d usually see in a sit-down restaurant; you get a coaster to take with you to your seat that buzzes when your food is ready (I jumped as it started vibrating across the table).

All in all, it’s been a pretty fantastic week. My stomach was happy, I saw new places on campus and experienced the thrill of trying new things. While I in no way wish I had been eating out all of the time for the past four years (student budget, after all), I do wish I had made more of a point to branch out and explore.

But it’s never too late! I’m going to be spending the next couple of weeks experiencing new things on campus and writing about them here. Next up, attending some lectures in an interesting subject I never got the chance to take any courses in!

0 comments on “Trying new things (in my stomach)”