What would you do if you had the courage?

After walking into a cozy, hidden room full of strangers at the top of Hart House yesterday afternoon, the first question I was met with did not ask my name, or why I was there, but: “What would you liked to have done in the past, if you had the courage?” And so began my first time attending a workshop in the “Courage to Connect” series, hosted by the U of T Poet-in-the-Community, Ronna Bloom. 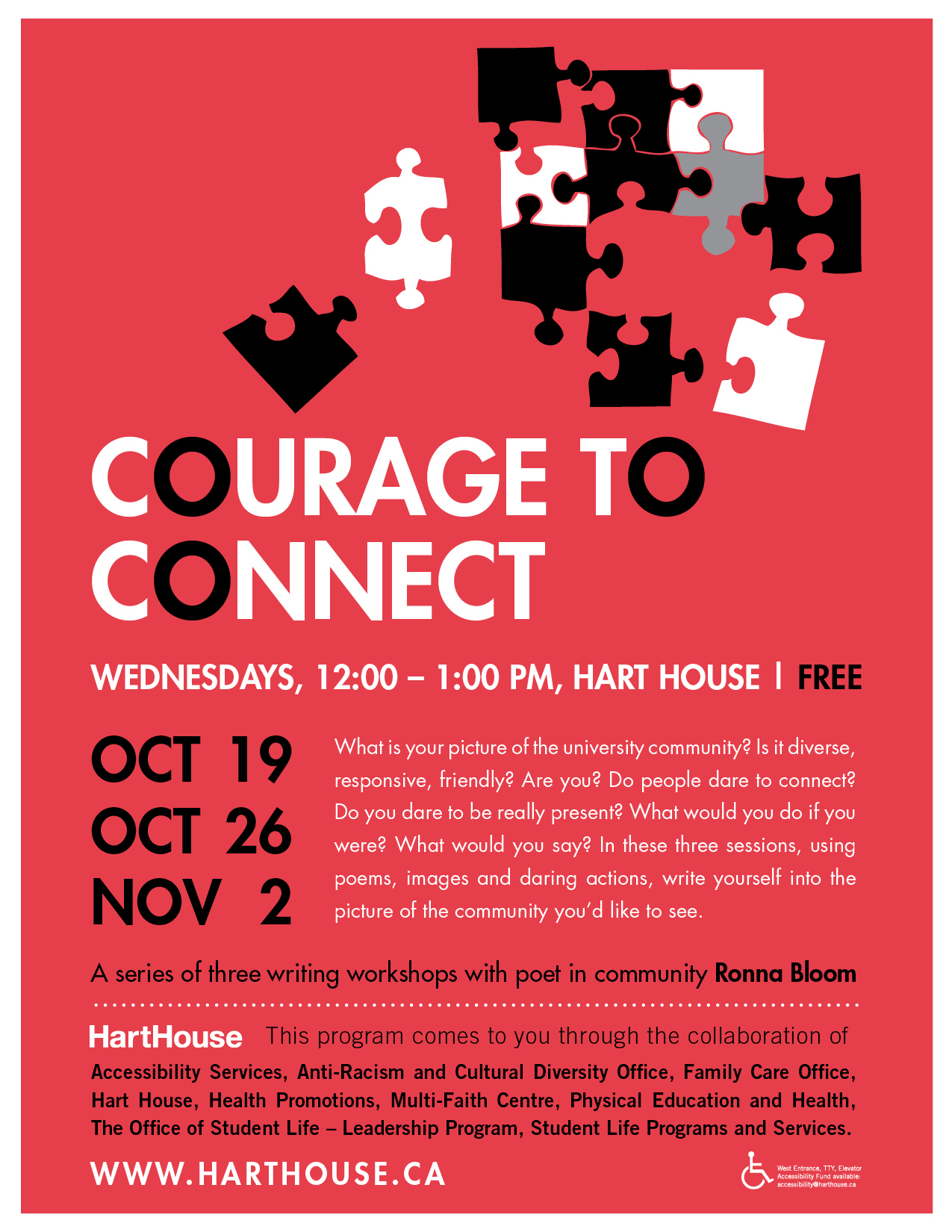 I will admit, I had anxieties about attending the workshop. There’s a tiny part of my soul that is a spoken word poet, and a significantly larger, louder, more well-cultivated part of my soul that tells me to go to the lab and do some science instead of attending a poetry workshop because what if they make you read your poem aloud and it’s terrible and everyone secretly feels embarrassed for you and tries not to make eye contact? Indeed. What if.

In the name of lifeatuoft, I did it anyways. I will write terrible poetry and share it with people I’ve just met, just to tell you about it, my dear readers – remember that. Despite my trepidation, Ronna welcomed us with sincerity and quickly transformed the room into an experimentation-positive, emotion-positive, expression-positive space. She began by laying out the rules:

1. Don’t think.
2. Don’t censor your words.
3. Keep your hand moving for the entire writing period.
4. “You are free to write the worst crap possible.”
5. You don’t have to share your work with the group.

Interspersed between writing prompts, she read us passages of her work and that of others to enliven and inspire us. We were given the space to share our work if we were ready, or merely to sit silently and appreciate others’ ideas. Poignant words were met with an appreciative collective stir or gasp. We talked about the act of writing, notions of courage, and the courage that can be found in the writing process itself. While some in the room were seasoned poets, others were simply curious and open to experience. Either one was perfect.

I found that the answers these questions evoked when I was forced to stop thinking – stop censoring; ‘stop stopping’ and just write – were radically different than the ones that I might normally have allowed myself to create. I listened to the words of others and they felt like warriors within their own lives. In the hour we spent together, I experienced a humanity and honesty that I’ve been missing; I’d found people who were ready to try to genuinely communicate, share, and connect with one another.

As the workshop closed, she read one of my favourite poems, and announced to us, “Next week, come back – we’ll play some more!”

I hope that you will join us.

0 comments on “What would you do if you had the courage?”