I admit that was a cheap trick to capture your attention. But rest assured, danger lies ahead and I promise that fire (and knives) will make appearances in this post.

Last week I posted about my ENG434 Cook the Books class attending the Wychwood Barns Farmers’ Market to source food. Since that field trip, our class has been cooking (and occasionally burning) carefully-curated, bite-sized morsels of food that compliment our readings each week. This particular week, the theme was “Ethics, Health and Aesthetics” and the group had the task of making samples of edible items based on Michael Pollan, Plato and Brillat Savarin, among others, that would feed both our mouths and our minds.

Before I entered the kitchen, I remembered the lesson Chef Joshna gave about basic kitchen health and safety rules, or, common sense:

– No jewelry, scarves, ties, anything hanging that can get caught in machines!

– Hands sanitized (and no nail polish, or acrylic nails)!

– Whenever handling anything hot, warn other workers by shouting out what you are holding!

One of these rules was broken. But I’ll never tell! And before I write any more ENG 434 behind the scenes action, it is important to stress that I observed the first cooking group in the short history of the course to ever prepare food for our class of amateur food critics. My three classmates not only volunteered to be ENG 434’s guinea pigs and sacrificial lambs, one group member deserted them last minute, adding to an already severe handicap (I’m sure you know where this is eventually going based on the title of the post). Although what I witnessed was far from mini Martha Stewart and Julia Child protégés in the making, I did see a lot of teamwork and hands on learning happening in the kitchen, a place that has become somewhat foreign and intimidating for many humanities students (although students working part-time in restaurant kitchens to make ends meet would arguably feel more at home). In fact, one profound statement that ENG 434 has made is that it encourages English students to reclaim the use of our (sanitized) hands, temporarily releasing them from being chained to pens and laptops as we write and type lecture notes and essays. Instead we are encouraged to get our hands “dirty” (while intellectually exploring the cultural stigmas of “dirty work” and “labour”) and cook creatively.

As expected, even though the majority of the cooking and food preparation ran smoothly, there were some unexpected bumps along the way.

One of the funniest moments I observed was when a classmate, who likes to use her hands, was asking Chef Joshna a question about measurements…while she was casually holding a knife?!?

“Okay…drop the knife,” Chef Joshna said in a tone reminiscent of an investigator from CSI (for the record, my classmate immediately dropped the knife, blushing at her error).

Another spectacle  I remember from ENG434’s first cooking class was hearing a frazzled classmate calling out for help when the ingredients she was heating up in a pot went up in flames. I am ashamed to admit, I pretty much stood there snapping photographs as my panicked classmate struggled to find the right turn dial to switch the  burner off (Chef Joshna threw a lid on the growing campfire happening on the stove).

Despite a few glitches in the preparation process, the group was able to pull off some tantalizing treats for our taste buds including gourmet hors d’oeuvres and peanut butter. Unfortunately, the lemon polenta pound cake and apple-cranberry compote that was supposed to compliment the “Deconstructed PB&J” on the menu was impossible to taste (I could barely lick it). The reason: a mislabeled jar led the group to use salt, instead of sugar, in their recipe. As one classmate remarked, “That sounds like a mean April Fools’ joke that stopped being funny after April 1st.”

Although the first group’s tasting did not turn out the way they anticipated, everyone has to give them credit for stepping up to the “plate” (terrible pun! Chad, that one is for you!) and being the bravest souls in the history of ENG434. By volunteering to be the first ever in any situation, you , and everyone else, will learn from your mistakes. It is a generous position to take on. Presentation group 1, I salute you! 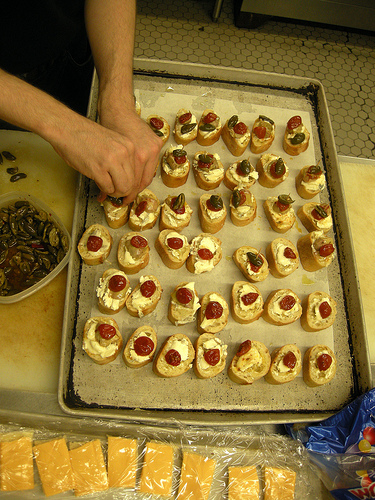 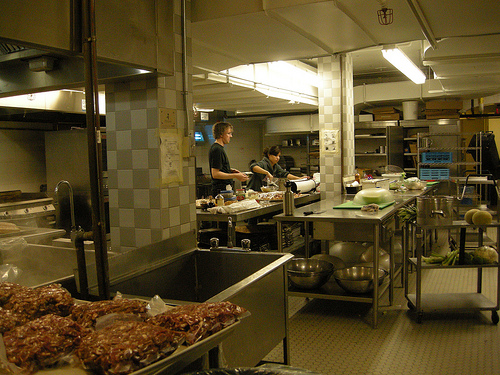 Grind 2 cups of roasted unsalted peanuts, with 3 tbsp of oil, and add as much salt/sugar that suits you taste. Also, you can grind it to whatever consistency you want.

8 sundried grape-size tomatoes, marinated in olive oil (larger sundried tomatoes can be used if you cut them into pieces)

The presenter used fig cabernet compote. You can use many variations. A cherry balsamic fruit spread, jarred, from Italy is nice, Tishbi makes some nice fruit spreads, you can make one from scratch, or experiment with homemade fruit spreads you find at stores.

In a pinch, a jam can be used, such as cherry or raspberry. The advantage of using something with a combination of flavours is it adds complexity to the flavour.

1. Assemble all the ingredients.

3. Lay the slices face up on your working surface

4. Drizzle the oil olive on the bread

5. Using a butter knife, spread the goat cheese on each slice of bread.

6. Cut each artichoke heart in half, and place a half on each slice of bread.

7. Take a toothpick and spear one sundried tomato, and then one olive (if you sliced the olive in half to remove the pit, include both halves).

8. Anchor the toothpick into the artichoke, cheese and bread (this is important as the items will roll off the bread when picked up otherwise).

9. Put a small amount of the fruit compote on top of the cheese to either side of the  toothpick. The toothpick should be in the centre of each piece of bread.

10. Using an eye-dropper or a very steady hand, pour 3 to 4 drops of the balsamic on each piece of bread as a finishing touch. Aim for 1 drop on the left side, 1 or 2 in the centre, and 1 on the right side.

11. Move the bread onto a serving platter and serve.