“The Medium is the Message:” Hanging out with Marshall McLuhan’s ghost at St. Mike’s

I’m Emily, your blogger for the summer months. Thanks for having me!

Late yesterday afternoon in the name of passion and blogging, I visited the Marshall McLuhan Centre for Culture and Technology. It’s a diminutive brick building nestled in the center of the buildings of St. Michael’s College. And trust me, unless you study Google maps before you head out, it’s pretty difficult to find. (Helpful hint: walk straight behind Alumni Hall until you’re in a parking lot, and it’ll be to your left.) 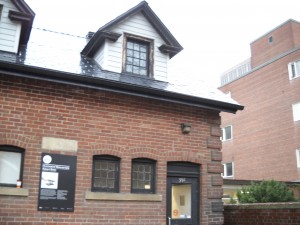 To be perfectly honest, I had never heard of McLuhan until I moved into residence at SMC, and accidentally stumbled into the Book and Media Studies program.

But as I quickly learned, Marshall McLuhan is kind of a big deal. You know that phrase that you hear everywhere: “The medium is the message?” Yeah, that was McLuhan. He revolutionized the study of media theory in the 1970s, totally calling the idea of “the global village” and predicting the World Wide Web long before the days in which talking about the revolutions facilitated by Facebook and Twitter became passé, and globalization was taken as a fact of the world, and not an eerie sci-fi fantasy.

He is considered to be the most publicized and controversial intellectual of the 20th century; he was named the most influential Canadian of the 20th-century by the Globe and Mail; St. Joseph St. is co-named “Marshall McLuhan Way”; and between 1946 and 1976 McLuhan called University of Toronto his home, teaching at English St. Michael’s College. (He also made a cameo in Woody Allen’s 1977 Annie Hall.)

Cut back to present day: I’m standing in front of the McLuhan Centre for Culture and Technology, on my way to meet with Dominique Scheffel-Dunan, the director of the Coach House Institute, a division of U of T’s Faculty of Information which hopes to further facilitate research that tries to make sense of the impact of the new digital landscape.

This little brick building is affectionately known as the coach house — the place where McLuhan hosted his weekly Communications and Culture seminars for students — and is currently hosting Robert Bean’s photography exhibit Illuminated Manuscripts, which pays homage to McLuhan’s legacy through a series of photos of out-dated technologies, and a projected montage of the papers, notes and letters of McLuhan, written in his own hand. The exhibit is a part of the Contact Photography Festival that’s currently taking place all over the city. I enter the coach house, finally getting out of the downpour of rain that’s been plaguing these blissful exam-free weeks. And I’ll be honest, it’s a small space. The walls are freshly painted a stark white and minimally covered by striking images of inscrutable machinery. The only furniture in the place is an old-timey microphone standing in front of a projected screen of McLuhan’s papers, an uncomfortable metal couch, and, curiously, a chaise longue which once belonged to McLuhan.

Dominque Scheffel-Dunan introduces me to Robert Bean, the artistic mind behind the works I’m looking at now. And he is so much fun to talk to. I listen as he tells anecdotes of his journeys to obscure parts of Italy to find out-of-date technologies to photograph; his thoughts on the writings of McLuhan; his own research and curriculum in media arts (he teaches photography at the Nova Scotia College of Art & Design); and his fascination with the idea of obsolescence. 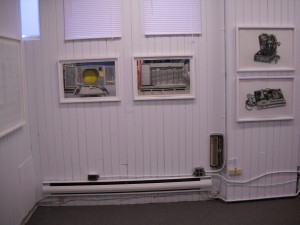 And I don’t want to bore you, dear readers, (especially not in my first post!) but I just can’t help gushing. I’m a book and media studies student. I dig this stuff. These kind of conversations, are the things that make an undergraduate degree worth pursuing. They’re the ones that give you an adrenaline rush because you’re thinking so quickly — and your brain kind of feels like a trapeze artist jumping from idea to idea.

There’s also something innately cool about having an intellectual conversation that ranges from iPhones to Heidegger in five seconds flat in the place that housed Marshall McLuhan as he wrote the books that revolutionized the field of media research. Scheffel-Dunand later tells me that an organization is currently celebrating what would have been McLuhan’s 100th birthday on July 21, and trying to “make as much noise as they can” to appreciate and celebrate the intellectual legacy in Toronto.

The coach house is at 39a Queens Park Crescent, and if you have some spare time, I really do recommend dropping by. The doors are open from Tuesday-Saturday noon to 5 p.m., so bring a friend; impress a date; show off U of T to your friends who go to Ryerson. Even when we’re stuck in the grind of getting papers done at 4 a.m. before turning them in at 10 a.m., we are actually so lucky to be a part of an institution that has housed intellectuals who have revolutionized their fields and created intellectual legacies. (And even managed to end up in Woody Allen movies!)

1 comment on ““The Medium is the Message:” Hanging out with Marshall McLuhan’s ghost at St. Mike’s”