U of T’s planetarium: zoom in from the edge of the universe!

I remember when I was a wee little thing, I’d lie in my bed at night and stare at the ceiling, wishing I could somehow transform the white paint into the night sky. Years later, a friend came back from Japan with a Homestar Pro – it’s this little globular projector that shines the stars onto the ceiling. We thought it was the coolest thing ever and even had an indoor picnic complete with cheesy music to toast our extreme nerdiness.

U of T though, just upped the ante with an inflatable planetarium tucked away in the basement of the Department of Astronomy and Astrophysics building. I’m not even going to say anything just yet. Let me take you on an adventure wherein I bring you to the very edge of the known universe and fly you back to Earth at an average speed of 7000 trillion times the speed of light. Open up the Inception or the Matrix soundtrack, or the Doctor Who or the Big Bang Theory theme song, or something equally epic. And then watch this:

Fly to Earth from the Edge of the Universe from Cynthia@lifeatuoft on Vimeo.

We just covered a distance of about 14 billion light years in 1 minute. I know right, UNREAL.

So what did we fly past? I’ll let Michael Williams, Observatory Demonstrator at the Department take it away –

The blue green triangles represent all the galaxies and quasars (very energetic distant galaxies) that we have mapped. The triangles are made up of hundreds of thousands of dots; each dot representing a galaxy. The triangular shape is due to the fact that we cannot see through the disk of our galaxy, so we have not mapped any galaxies that are behind it. In reality, that triangular shape should be more like a ball.

The blue sphere represents how far human-made radio signals have traveled. The radius of the sphere is 70 light years and it has been about 70 years since we started boradcasting radio signals that were strong enough to escape Earth’s ionosphere.

This isn’t all the planetarium is capable of projecting. Apart from showing me the night sky (pretty stars are pretty!), outlining the constellations for me and showing me an eclipse, Mike brought me around to the different planets; he even flew me to the moon! “The graphics for the surfaces of Earth, the Moon and Mars are from a NASA database,” says Mike, “most of the other graphics and images come from the American Museum of Natural History.” You’re actually looking at the back of the moon; the side we never see from Earth (the dot on the right) because we always see its front.

We also went to Pluto (who is no longer a planet, if you didn’t get the memo yet) for nostalgia’s sake. Apparently, to be considered a planet, you have to 1) revolve around the sun; 2) be large enough that your mass pulls you into a sphere; and 3) has “cleared the neighbourhood” around your orbit. Poor Pluto, who missed out on the very last criterion. Close, but no cigar.

The planetarium itself is like a giant inflatable castle (but made of sturdier materials; I poked to check), kept erect by continuously pumping air into it. 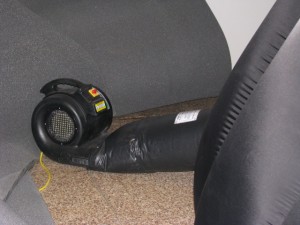 It has a projector that is connected to a computer (you can control the display via a video game controller!) that is controlled by another computer. 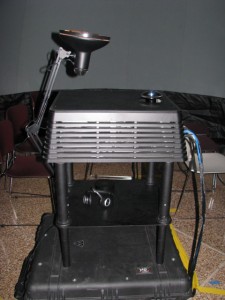 So I guess the question you’re bursting to ask is whether or not you can go see the planetarium in person, even if you’re not an Astronomy student at U of T (or working for UpbeaT, heh). The answer is, why yes, dear readers, yes you can!

Mike gives free, open lectures to the public every month. It’s around 5-7 minutes in length while you and about 24 other people are seated inside the planetarium, listening to an introduction to the universe with a specific focus on what’s important in the field right now. This month’s tour is full, but next month’s will be available soon – be sure to sign up!

So are you going to go check out the planetarium? What’s your favourite planet? Any epic soundtracks I should be aware of that would make a great background to the video? Speaking of which, if you’re so video-inclined, feel free to add audio tracks to the video! Of course, link back so I can see!

Hope you had a great Turkey weekend,

6 comments on “U of T’s planetarium: zoom in from the edge of the universe!”