Be sustainable, be green!

“It” is the Blue Sky Solar Car team’s baby, named Cerulean. I joined the team two years ago, but since I work in advancement, I’ve never actually seen the car up close before. It is so, so pretty. My precioussssss. 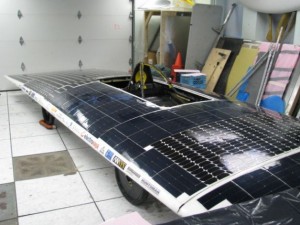 Like Georgie, Cerulean gets asked to make appearances at University events every so often. This time, Cerulean is dropping by for the Sustainable Energy Fair. The rainy weather meant we had to protect the solar cells from getting wet, but man, that cover was slippery. Fortunately, the Weather Gods behaved themselves, and we were able to get Cerulean to park its glorious self in front of Hart House. 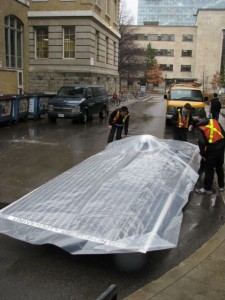 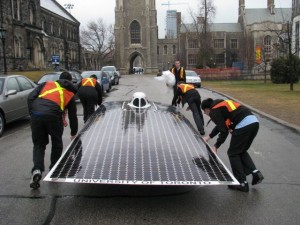 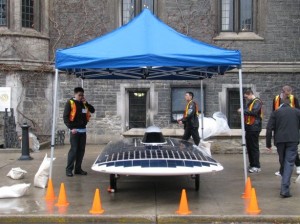 You may have seen the posters all around campus promoting the SEF, which took place last Friday. Ironically enough, that’s not how I heard about it. I found links to the SEF site when I was researching Environmental Career Day, which took place the day before. From the wacked out winter weather we’ve been getting to the influence of Al Gore’s tears, people all around the globe are becoming more conscious of their ecological footprint and new career opportunities are springing up left and right. 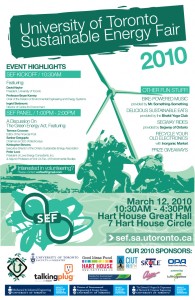 You can see these different careers manifest in the exhibition at Hart House on Friday. I snuck away from manning the team’s booth to see the different exhibitors showing inside. From solar-heated water systems (below) to Segway rides, Hart House turned into an environmentally-friendly fun house. David Naylor and two other guest speakers kicked off the day with speeches, and Mr. Something Something followed with live music. 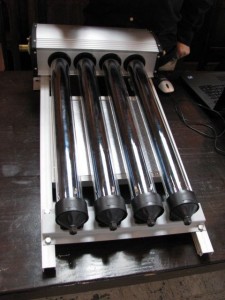 Mr. Something Something was certainly something – they were bicycle-powered! Talk about a whole new way of audience participation! There are bikes set up in front of the stage, and from what I understand of the Sound Cycle, pedaling creates a current that is converted for the band’s use. The band’s music gets people pumped and dancing and that infectious energy seeps back into the cyclists to continue pedaling. 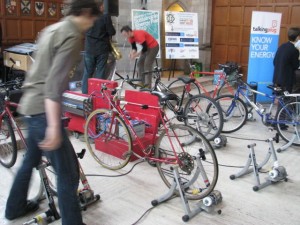 There was also the TalkingPlug. This is basically an outlet that can communicate the power usage of an appliance plugged into it, which you can then monitor online. Given the amount outlets and devices plugged into the University at any given time, to quote the TalkingPlug guy, “Imagine the energy and money you will save!” 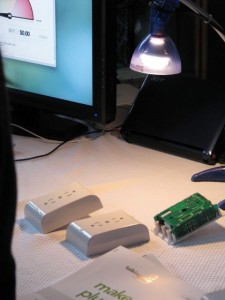 As I left the exhibition room to creep stealthily back to the solar car booth outside, I caught sight of free Segway rides. Free! (I had to pay a pretty penny for the Winter Tour at the Distillery). The thing that amuses me most about Segway rides is not the vehicle itself, but the disclaimer-insurance-paper you have to sign. It’s much like the one you sign when you go Bungee Jumping – they’re not responsible if you die. It’s pretty dramatic for a vehicle whose top speed is 20km/hr. It feels much faster the first time you go on one though, so you’re not going to go that fast anyways. 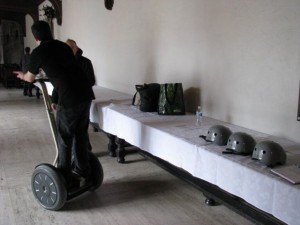 It’s funny. I originally ended this post with a snarky remark about how Cerulean can go much faster than the Segway. But when I work up this morning, I realized I’d slept straight through my morning meeting. Why? The power was out. My Philips Wake-Up Alarm Clock (which is awesome, and another post for another day) was alarmingly blank and I was freezing. In my groggy state, I thought I could take a hot shower. The water wouldn’t heat, but I washed my hair anyways, and groaned when I couldn’t turn on my hair dryer.

I didn’t realize how much I depended on electricity until I lost it and tried to go about my everyday activities. I couldn’t. It drove home the need for sustainable energy. Great timing, Powerstream!

*I know, I could’ve opened it manually. I don’t have the key and I don’t know how. I normally would Google, but if I could Google, I wouldn’t be in this predicament in the first place.

2 comments on “Be sustainable, be green!”