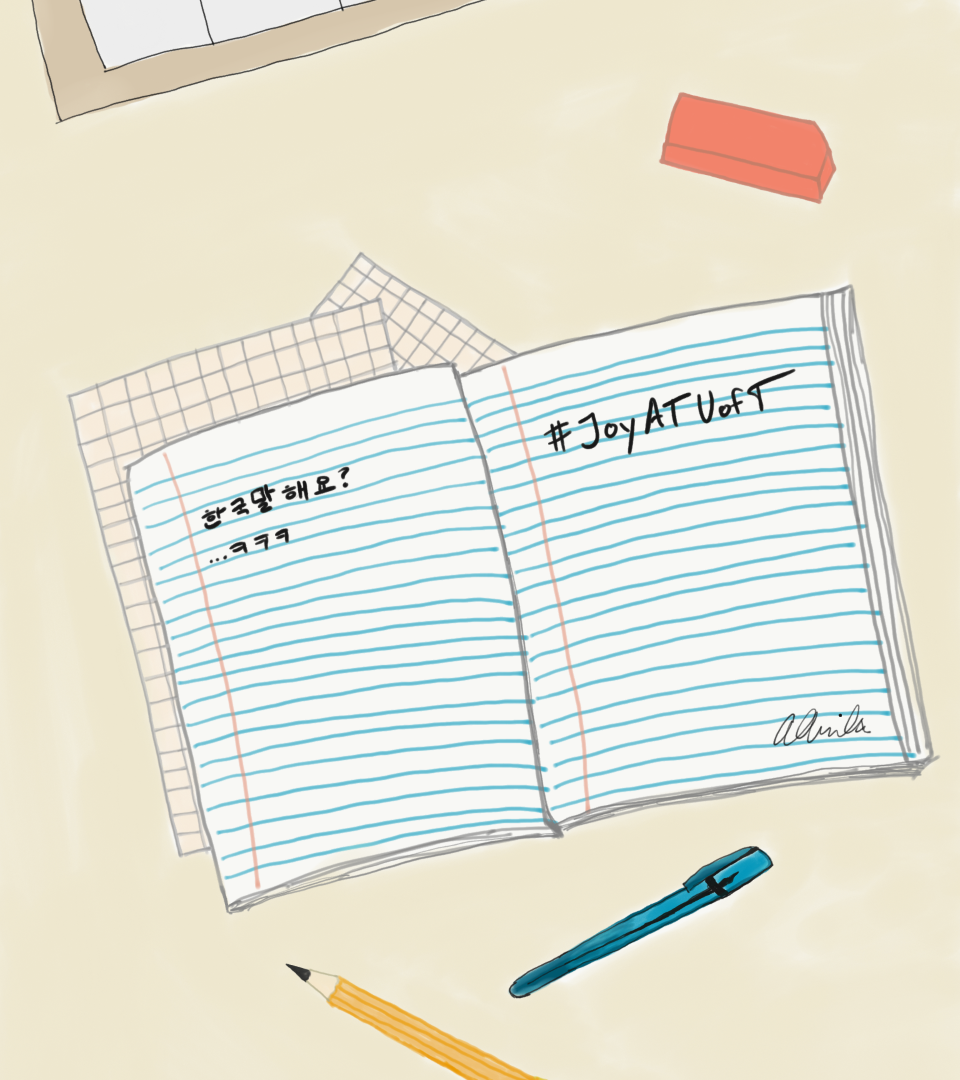 The Uphill Joy of Learning a New Language #joyatuoft

Learning languages excited me more than most things. I jump right in but then give up just as quickly when I try to say a sentence in that new language and suddenly forget everything I learned. I come from a South American background but I grew up mono-lingual. For a long time, I always loved the idea of knowing another language apart from my native one. But that was the problem, I loved the idea.

If you didn’t grow up speaking another or multiple other languages because of your environment then getting yourself to voluntarily learn a language is a completely different game. I constantly bounced between different languages of interest but rarely stuck to any. Why? I didn’t give myself enough reason(s) to spend the time, dedication, and investment needed to become proficient in another language. When you are not obligated to speak in a different language, you have to actively find a purpose for achieving fluency.

My teenage years relied on “just wanting to.” I searched for every “quick” way to learn a language (I even came across a video showing you how to learn a language in your sleep!) and when I was told time and time that there was no “easy” way, “just practice”, I kept giving up.

Right now, I am taking a full-year course at U of T called Accelerated Modern Standard Korean I & II (EAS211). Wait – I just confessed how I gave up on learning languages every time it got too hard and too time-consuming. So, what on earth am I doing taking an INTENSIVE language course now?  Not too long ago I enrolled in a summer beginner’s Korean class and dropped out after the first week. Believe me, I am aware of my track record of failed-language-learning.

But seriously, what is different now? Have I set myself up for failure, yet again? It took me a long time to figure out what drove people to teach themselves a language. It has very little to do with them being a “fast learner” and that is a hard pill to swallow.

For about six years I had an avid interest in Korean pop culture. It was bizarre yet so fascinating to me and I was craving to learn more. When I was fifteen I thought it was just been a phase so I put-off learning the language. Well, I’m almost twenty one now, so it’s safe to say my interest is solid. As I became more engrossed in Korean culture, history, and social issues, I felt that there was something missing. My reliance on subtitles distanced me from gaining a deeper understanding of the culture. I felt that there was a national context I was missing because of the language barrier. I often rely on what Western media tells me about the country and I was longing for a native perspective that I could understand for myself. So, I realized that learning Korean was the one way I could get a fuller grasp of the  culture. There is so much beyond the language barrier, the subtitles, and the English information available, that I have yet to explore.

I found my purpose, my intention to keep going in pursuing a foreign language. When I look at those who successfully became proficient in a new language, I realize it was exactly those aspirations that got them there. Everyone has a different purpose for learning a foreign language. But one thing that is certain: It goes beyond “it would be cool,” “why not?” “because *insert language* is easy.”

Learning Korean occasionally makes me want to stick needles in my eyes. My speaking skills are sometimes horrific, and every now and again I get made fun of. But when I understand a little dialogue in a movie or can read a new sentence, I get more excited every time.

For language opportunities at U of T, check out these links below: