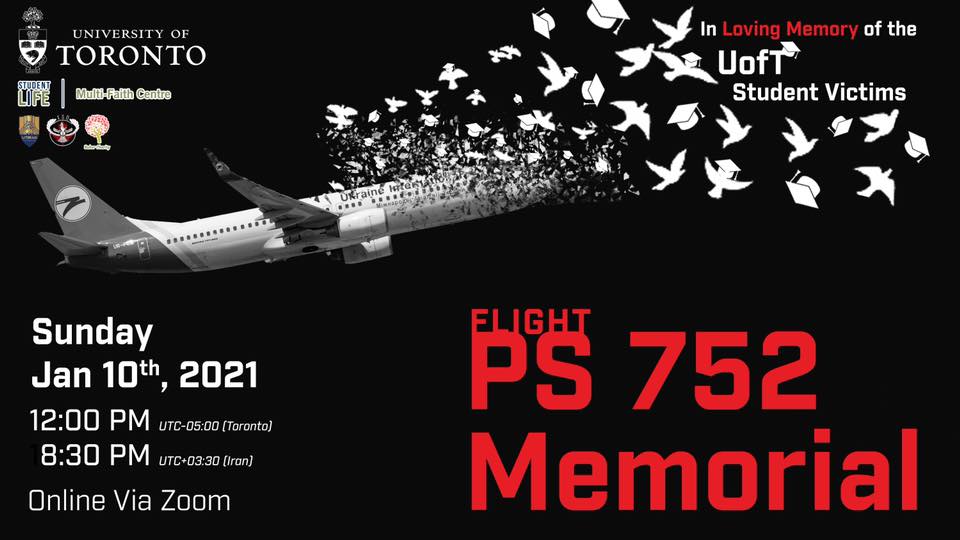 Just over a year ago, on January 8th, 2020, eight members of the U of T community were killed in the Ukraine International Airlines Flight P752 crash. In memory of the victims, the Iranian Association at the University of Toronto and the UTSC Iranian Students’ Organization organized a virtual memorial. The service focused on remembering the eight U of T community members and acknowledging that the U of T community, as well as the families and friends of the victims, are still mourning the loss of Zeynab Asadi Lari, Mohammad Asadi Lari, Mohammad Salehe, Zahra Hasani, Mohammad Amin Beiruti, Mojtaba Abbasnezhad, Mohammad Amin Jebelli, and Mohammad Mahdi Elyasi.

The memorial highlighted the individuality, accomplishments, and personalities of each of the victims, paying tribute to their contribution to research and academia. Especially considering the long list of achievements for each, it was not difficult to see just how passionate they were about their studies or their careers. However, more importantly, the moderator and speakers expressed how deeply they were loved by friends, family, and community members. Audio tapes from loved ones played during the ceremony, where event attendees could hear how the deaths of the eight personally impacted the lives of those who loved and cared for them. Most of the audio was in Persian, however, in English, I heard the phrases, “I miss talking to you, you made your friends feel warm in your presence,” “I’ll always try to be a little more like you,” and “I miss seeing you care for everyone who was around you”. These personal remembrances are heartbreaking, but they also illustrate how their legacies are carried on in the hearts and souls of those who truly knew and loved them.

Through personal descriptions, those who spoke tried to communicate just how bright and caring each person was, how much people admired them, and the different ways they impacted the people around them. Zeynab Asadi Lari was in fourth year. Her work and dedication was driven by the desire to improve people’s lives, through both day to day kindness and by focusing her research on reducing the stigma surrounding mental health. She was also the founder and president of the youth team STEM fellowship, which was a non-profit, student-run organization. She was described as incredibly caring by friends and family. Her brother, Mohammad Asadi Lari, was characterized as a deeply compassionate person who was especially dedicated to empowering and mentoring youth, also founded the Canadian Association for Physician Innovators and Entrepreneurs (CAPIE).

Mohammad Amin Beirut was quoted as being someone “whose kindness never dies”. He was a mentor for undergraduate students, and dedicated himself to tech, believing that the future of technology could build a better world. Mojtoba Abbasnezhad was bright, caring, talented, and intelligent with a genuine heart, illustrated as someone who was “always smiling”. Mohammad Amin Jebelli was described as being gentle, soft spoken, clever, and curious about the world. He was dedicated to becoming a doctor. Mohammad Salehe was thought of as kind, caring, and humble, but with an undeniable talent for science. Zahra Hasani’s generosity inspired those around her, especially considering her intense devotion to friends and family. She was described as someone who “lived life to the fullest”. Lastly, Mohammad Mahdi Elyasi, a hard-working and creative person, was also known as being incredibly helpful to anyone who needed him, always offering support to those who needed it.

These descriptions cannot possible encapsulate the gravity of the lives lost, nor can it capture the fullness of the lives they led. However, the memorial did offer the attendants the opportunity to hear more about the victims, commemorate their many accomplishments, and to grieve as a community.

In honour of the eight students and faculty members, the Iranian Association at the University of Toronto has joined together with the Bahar Charity to launch a fundraiser.  Through Paradise Charity, the campaign’s goal is to provide education to underprivileged children in Iran. Specifically because they were so dedicated to education, research, and studying in hopes of making the world a better place, the Paradise Charity fundraiser hopes to commemorate the eight victims by giving other children similar opportunities. The link to donate is located at the bottom of this page.

Although the memory of the eight live on in the minds and hearts of those that love them, the tragedy of this event has forever changed the lives of many, with 176 passengers killed in the crash. In Canada, January 8th is now recognized as the day to commemorate all those whose lives have been lost in airline flights. Today, the Canadian government is developing an initiative working towards safer airline travel in an attempt to prevent this from happening in the future. The memorial ended with speaker Rahim Rezaie, who commented that the pain of a few can “reverberate in the ocean of humanity, affecting all of us”. The memorial, although online, still provided a space for people to recognize the weight of this loss, and to commemorate the lives of Zeynab Asadi Lari, Mohammad Asadi Lari, Mohammad Salehe, Zahra Hasani, Mohammad Amin Beiruti, Mojtaba Abbasnezhad, Mohammad Amin Jebelli, and Mohammad Mahdi Elyasi, who will not be forgotten.

To Donate to Paradise Charity:

0 comments on “Remembering Those Lost: Attending the Flight PS 752 Memorial”