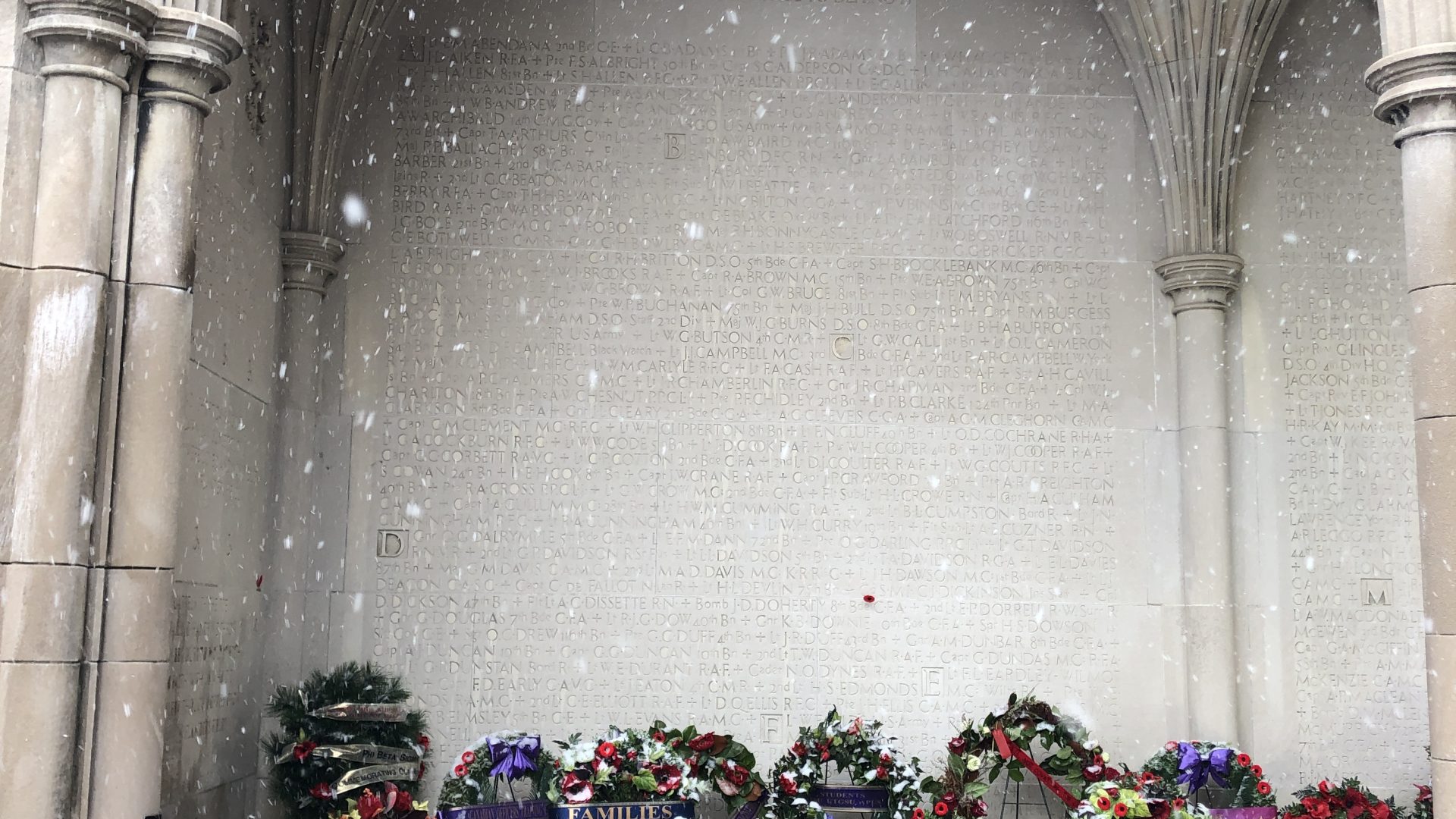 On Sunday, I held my own 2-minute silent for Remembrance Sunday as Downing Street and the rest of the UK adapted to making the national event online. It felt strange but a working stop-gap. Over the past few years, it’s been an important event to me and I’m unsure if Canada only celebrates on the 11th November or if they have a Remembrance Sunday service, but I’ll pick it up as I go.

I remember going last year to St. George Hart House service. The view of the Soldiers’ Tower above was what was towering above me as I stood waiting. It was possibly the first snowfall of the season and I was freezing with the howling wind. I didn’t have any gloves and even though it was snowing lightly, the cold was painful. I had ice in the heel of my shoe somehow and I was generally pretty cold. But going to these services are important to me and my family, so I couldn’t let it the same challenges of the men and women of the past bother me. Having been to services like these for my whole life, it hadn’t ever snowed during one and looking back the snowfall made it distinct and still traditional. It just doesn’t snow much in England and far less so in November.

A great surprise to me was the involvement and impact that the University of Toronto has had on Remembrance. I began to discover that members of the U of T community were spread across Europe about a century ago, including one influential man, John McCrae. He wrote “In Flanders Fields“, which seems unimaginable to me. I had somehow gotten far closer to this poem that I had heard over and over and even studied but didn’t know its origin. And this gave me a new perspective to the poem, and I can start to see the surroundings and community he valued next to me.

Last year, my faculty Engineering made this Cross centrepiece for Front Campus (above) and in memory of those students from U of T Engineering and the wider community that fought in The Great War and the Second World War. I’m grateful for them and their annual efforts put into making something memorable but also simple.

As there’s no public event, I think it’s going to be hard on the charities and volunteers that collect the donations for poppies. For me, I haven’t purchased a classic poppy as they haven’t really distributed them but are offering a metallic pin poppy, and in these tighter times, I thought it was fair. I remember from the event last year that there was a sense of pride for these volunteers and they were really upbeat and helped me out on the day, so I hope they’re doing well too.

For those hoping to attend the event this year, U of T is hosting a live stream of the event on Wednesday 11th November 2020. I’ll link more information about the event on different U of T campuses here and its recommended to sign up for the event in advance. If you’re alumni, this might be a better place for you here.

To check this year’s event would be managed okay, I reached out to Kathy, who works with the team at Soldiers’ Tower. They usually organise the Remembrance Ceremony at U of T. The event has been carefully planned to be as safe as possible and accessible, especially for those who may have a closer connection than I do. The event has been shared widely and I hope those who want to attend have found out about it.