How To Actually Be Productive At the Library

With midterms and essays piling up, I’ve had two major realizations thus far.

1) Taking 6 half-year courses, while starting a whole new program and working 3 jobs might kill me, but also I can sleep when I’m dead?

2) Now that I have a minimum of 3 evaluations/papers due each week I need to be productive when I sit down to study and use my break times effectively.

Ever since high school I’ve been the type to find a cubicle and make it my home for the day until my assignment is done—only leaving for the occasional bathroom break or Starbucks Venti. But University’s a whole new ball game. U of T’s 40-some libraries each offer different amenities such as private study rooms, beautiful readings spaces and academic content on a variety of subjects. Coming into third year, the library has also become a social time, which has its advantages, though also has presented some obstacles.

From someone who’s so detail oriented that she works slowly and gets distracted easily (why are you listening to me again?), here’s what I’ve learned so far about staying on task at the library.

If I’m really looking to buckle down and need to finish an assignment within the day (just me? OK ANYWAYS), I’ll head to Graham Library and cozy up in one of the knooks. It’s always warm and smells of cedar pine. This choice depends heavily on your study habits and personal preferences, but as long as I’m comfortable in a place, I’m one step closer to being productive. 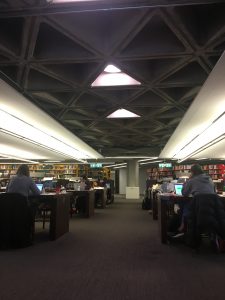 2)  Have a clear head space. This leads me to my second point. I need to ensure I am mentality in a space to get work done. I know this sounds a little spiritual, but if something’s bothering me outside of the classroom, it’ll most likely deter from my academic performance. If you’re one of those people that can block everything out then, hats off to you! Though the majority of my friends deal with the same problem. We’ve all had those days where we stay at the library and don’t have anything to show for it. I try to sort out whatever’s going on and then hit the books.

This is a step I’m still working on (thought I’d include it as a sign of growth?). If I’m writing an essay, I’ll load all the scholarly texts needed, then I’ll turn the wifi off on my laptop. This isn’t foolproof, but at least I stop the outside world for a little bit and am able to zero-in on academia. Limiting phone usage also works and if I’m studying with chatty friends, I just let them know I’m stressed with work. Everyone understands the need for quiet studying. 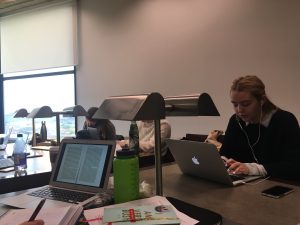 This needs no further explanation, except to say I’m not that person with a 4-course Indian meal that smells up the entire floor.

The biggest thing I’ve learned is to not be too hard on myself if putting pen to paper just isn’t happening one day. Studying takes practice and adjusting to new environments isn’t always simple. Sometimes I just have to take a break and regroup!

Hopefully hearing my library expertise (or lack thereof) inspires you to take on one of these wonderful establishments.

See you in the stacks! Until next week-R

0 comments on “How To Actually Be Productive At the Library”