This week, I did one of the coolest things I’ve ever done in my entire life: I paid a visit to two of U of T’s Honeybee Hives.

Yes, you read right! U of T is home to three apiaries at St. George (they can be found on the rooftops of Trinity College, the Earth Sciences Building, and the Faculty Club). U of T’s Beekeeping Education Enthusiast Society (B.E.E.S) manages the apiaries, and is all about promoting the importance of urban beekeeping.

I met up with B.E.E.S president Alissa Saieva and a few others on Thursday at 4pm, right outside the Faculty Club on Willcocks Avenue. The Faculty Club has three hives on its rooftop. We walked in, wound our way up a series of staircases (sidenote: the Faculty Club is a nice place!) and proceeded to put on bee suits. Well, bee jackets, rather, complete with the Masks that you’ve probably seen in movies or magazines. 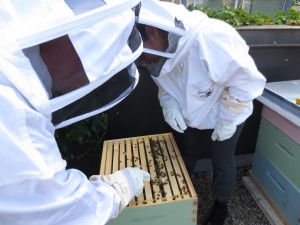 Suits on and masks in place, we clambered out on the rooftop and made our way to the first of three hives. B.E.E.S actually constructed the hives themselves. Each hive was supposed to have four different coloured sides, but ended up being put together in the wrong order, so now each hive is a patchwork pastel delight.

Hives are really a series of boxes stacked one on top of the other. Each box has a number of wooden frames. Bees make their honeycomb in between the frames. Bees build honeycomb from the bottom up, so the very first ‘box’ generally has a lot more activity than the box on top. People have the impression that if bees are around, they will swarm and/or sting you. The truth? They just do their own merry thing. Sure, there were a lot of bees flying around us, but they tend to keep to themselves, unless you flail your arms and agitate them. The key: no arm-flailing. In fact, they really paid us no mind at all.

It was the second apiary visit over at Earth Sciences that had us all up in arms. Dr. Sandy Smith, a professor in the Faculty of Forestry, joined us. We were adventurous enough to get down to the first layer/hive. This is what we found!! 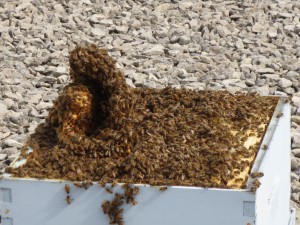 When the guys lifted up the second layer from the first, a chunk of honey comb was dragged up as well, along with so many bees. Crazy, no? We were all blown away. It seems the bees were swarming, meaning that they are raising a new queen and preparing to start a new colony. When the queen is ready, she will fly away, taking many of the worker bees with her (up to 60% of the colony). B.E.E.S. wants to avoid that, so they will find a way to keep the colony at U of T.

This particular colony had already produced so much honey that Sandy was able to scrape some of the honeycomb away. Bonus! We all got a taste, which tasted similar to Linden honey. The taste and type of honey depends on which flowers a bee colony will pollinate. Apparently, the colony over at Trinity produces a much darker honey. 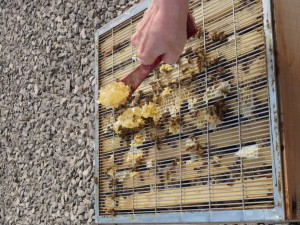 To Bee or Not to Bee

Why are bees so important? If, like me, you don’t really have a clue, this handy infographic put together by BeesFree is very useful. Take a peek! Long story made very short, without the pollinating action that bees undertake, we would be left with far fewer choice of fruits and vegetables. Most of the staples that you eat everyday would disappear. News of tremendous amounts of deaths of bees has been at the forefront of newscasts as of late, as per the following article by the CBC.

In the face of that terrible reality, U of T B.E.E.S has taken the reins on all things bee-related. The club hosts a variety of educational events and workshops, which include: hive building, hive installation, honey harvesting, swarming prevention, and the history of beekeeping among various others.

They also host various social events throughout the year such as film screenings, potluck BBQs, and pub nights. However, the club’s main attraction is a series of summer hive visits which run during the beekeeping season (May until early November). All visits and events are open to U of T students/faculty and community members. They provide you with the opportunity to get hands-on beekeeping experience, with a ready supply of suits and gloves. Hive visits are scheduled for every second Thursday.

My bee adventure was amazing, and nothing like what I expected. If you have a few moments to spare, take a stroll and connect with nature in a different way. I guarantee that you will bee pleasantly surprised.

Check out our Facebook Album of an Afternoon with B.E.E.S!

0 comments on “An Afternoon with B.E.E.S”