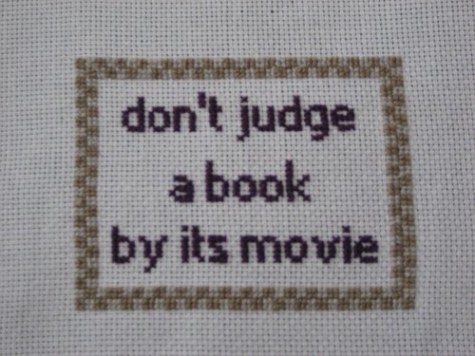 So reading week is upon us and I am buried in course readings. I had planned to buckle down and start reading a few days ago, but alas I procrastinated and started to late.

Realizing that I would have to read for five straight days without sleep in order to finish the three novels and stacks of course readings that are waiting for me, in a panic I decided that I would find these novels on film.

I’ve never done this before. I am of the firm opinion that the book is always better than the movie. However, when the choice is to not read any of the book or to watch a bad movie about said book, which will not be read in time, then the movie will at least give me some point of reference for class discussions.

I lucked out big time with this attempt at condensing my readings into film format. Unbeknownst to me one of the books I was assigned was actually the script to a documentary. In a case such as this it just doesn’t make any sense to read the book. I mean it was written for the screen. It’s like reading Shakespeare…an effort that in my opinion that deviates far too much from the original intention…plays are meant to be watched not read.

So this documentary, that I was assigned to read was actually really great. The narration was written by one of my former professors, which is cool in itself, and it did a great job of bringing the course material to life. I feel that in this case seeing the documentary and reading the book are of equal academic value. Watching the book was just so much easier and more enjoyable.

http://www.youtube.com/watch?feature=player_detailpage&v=GCrbkIX1p3Y
Is this cutting corners? I don’t think so. As long as I get the intended information into my brain, it doesn’t really matter much to me how it gets in there. If in some cases that movie or play is a more effective way for you to learn the course material then more power to you.

In this particular case, the movie beat out the book hands down. The U of T Library website has a massive collection of movies that are free to borrow. Check out their page and maybe one of the books you are having difficulty getting through will be on film.