Put down that book, television remote, lap top, phone etc. What do you see? What you are probably looking at, especially if you are at home, is a messy mess. It’s no surprise that during the most stressful time of the year, in which we have so much to do, we neglect the things that don’t require immediate attention, and that won’t be critiqued by the outside world. But, I think (speaking from experience) that clean house brings clean mind, and in order to excel at anything that requires an arduous investment, dedication and organization (ie. school), we must start by disciplining ourselves to clean our chaotic, dusty, smelly ____________ (rooms/kitchens/desks/cats?)

Yes, cats. Below is a before and after of my sweet pea. He is a living, breathing, munching dust bunny who requires a good clean up now and then so that he doesn’t cover my place in hair and doesn’t cough up nasty hair balls, presents I tend to find as I awake from a good, but after not so good slumber. Take it from kitty: clean house (or body) equals clean mind. He can now lick himself until his heart’s content without getting hair stuck in his mouth. Meow. 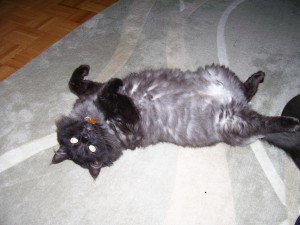 Hopefully my metaphor can help you envision how organizing and cleaning your mess can free you from stress and other things (maybe a hair ball?). What I suggest is to start small so that you don’t overwhelm yourself. Take one room or area of your place (ie. bedroom) and attack it. For example, this weekend I cleaned my bathroom. I have this thing where I get scared of cleaning because I’m afraid of what I’ll find, but it wasn’t so bad. It took a good 45 minutes of scrubbing mirrors, bathtubs and counters, but gosh it looked good. I think having a nice and clean bathroom makes other “arduous” things easier, if you know what I mean.

Ok, so cleaning isn’t fun and I’m not gonna ever be a Haus Frau, but somebody’s gotta do it. Same with cooking. In my household I’m the one who has some kind of ability  in the kitchen, so it’s up to me to cook. It’s not even like I have to cook, but I think eating homemade is not only tastier, but less expensive. Hence cooking a whole chicken. Last Sunday, for the first time in my 23 yrs, I cooked a whole organic chicken, who we named Charlie. Charlie didn’t die in vain, as he spent his life happily pecking away in the fresh air, and his succulent meat won’t be useless either, as he will lend himself to a soup, pasta, and maybe some sandwiches. Cooking a big thing at the start of the week means I don’t have to spend as much time cooking, and it also means that I have some aptitude for gastronomy.

It’s really about creating a less stressful environment, whether because its cleaner or you have fewer tasks to do, so that you can spend more time studying, or going on facebook. YAY. And yay for Charlie and my sweet pea.