On a rainy September night, I drove to Pearson and waited in the terminal for five hours. This wasn’t an exercise in patience, I was waiting for the international student my family is hosting to disembark from her flight from China. It was with trepidation that I stood there wondering if this stranger would know who I was, or if I would know her. I knew very little about her and when she finally came through the sliding glass doors I found out that she didn’t speak English.

The first few weeks were challenging for her and for me as we negotiated the language barrier as I attempted to help her settle into her new life in Canada. You would never know it now, only three months later, that this young lady only arrived in our country a short time ago. The speed at which she is learning English is remarkable. It is reminiscent of when my sons first learned to talk.

As much as we are trying to get her acclimatized to our culture and weather, we have experienced something unexpected. We are also being introduced to her culture. I am learning things about Chinese culture that they just don’t tell you in guidebooks. Little secrets passed down from mother to daughter, tips and tricks in the kitchen that would never had occurred to me if she hadn’t mentioned them.

As January approached I sensed that our student was missing her home. She enjoyed our Christmas holiday, yet I knew she was missing the festivities that would soon be coming to her hometown. She told me about Chinese New Year. I thought I knew all that there was to know about the celebration. I’ve been to some festivals in Toronto, I go to the Mandarin in January and gorge on dumplings. I soon found out what I was missing when I suggested that we have a Chinese New Year celebration in our home, with a menu of her choice and whatever friend she wished to invite.

According to her the entire day of celebration revolves around the making and eating of dumplings. As I said I’ve eaten my fair share of dumplings, but I had never attempted to make them. The funny thing is that she had also never made them by herself. This was something that the older women of the family do, while the children mainly stuff the dumplings or close them up. 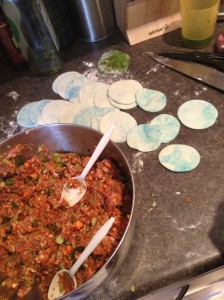 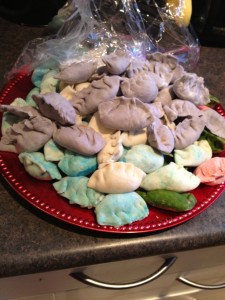 With the help of Google – and her mother, via Facetime, propped up against a bowl of ground pork on my counter – we managed to perfect the dough and filling. We made close to one hundred dumplings, in an array of festive colours, using different vegetable juices as a dye. The entire process of dumpling making started at 9am and was finished at 4pm. By the time we finished both of our sore hands were stained with vegetable juice and scented with ginger and sesame. The eating of the dumplings was so fast compared to the prep time, but it was well worth it!  One word mmmmmmmmmmmm!!  Check out the dumpling spread below! 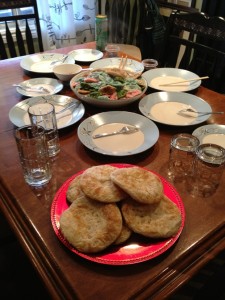 I learned a lot that day about how even though our cultures are very different; they are also very much the same. Just as I toil over a turkey with my mom every Christmas, so too does she toil over dumplings every Chinese New Year. The experience of hosting an international student is eye-opening. I’m learning through her how hard a transition coming to a new land can be. I feel as though I am now more aware of those around me on campus that struggle in the same ways our student does. It is so important that these students who are alone and far away from their families have friends to rely on. I encourage you to engage with an international student if you haven’t and try to make a difference in their lives as they settle into life in Canada. You’ll learn as much as them!