Happy 2011, dear readers! Hope you all had a wonderful holiday filled with fun and food and friends and family.

We all know what most people make during this time of year: the New Year’s Resolution. It’s the time of year where gyms see a marked increase in subscription purchases, and we vow to change our lives and do this and do that.

But we all also know that most people don’t achieve their New Year’s Resolution(s); in fact, most have already forgotten by the end of January! 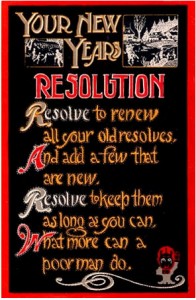 So how do we keep the resolution(s) we make?

I remember back in high school guidance class, we were required to read The 7 Habits of Highly Effective Teens, by Sean Covey. Like the rest of my class, I scoffed at the book, but after the end of the semester, it was the one textbook I kept, and to this day it’s still on my bookshelf. The one thing that I remembered from the book was about goals and habits, and it said that the success of goals depends on the formation of habits.

Forming habits is easier said than done of course; after all, you’re trying to change the way you’re used to doing things! I’ve made many goals (if you can believe it, everybody was required to goal-set at the beginning of each semester and share it with our homeroom teacher in my highschool) and looking back, I realize that the ones that were successful were the ones where I’ve learned to form new habits. Funny fact: setting goals has now become a personal habit because I was forced to do it regularly since grade 9!

I’ve found that there are several things that help me to keep my goals and form new habits, and I thought I’d share them with you. It’s not the only be-all and end-all of goal-setting of course, but it’s what I’ve found to work best for me.

I think this is the most important thing to do – to know exactly what you’re getting yourself into. It’s easy enough to say “I want a better GPA!” but it’s much harder to realize that this becomes a priority commitment. This may mean having less time to go out, not doing other things you want to, studying longer hours, etc., but having a better GPA means getting into the grad school you want and the feeling of satisfaction at having done your best.

Thinking through what my goals cost me have allowed me to be realistic about what needs to be done to achieve it, and so, for example, when I have to turn down a party because I need to study, I’m already mentally ready to make the decision because I’ve prepared for it. This makes me go, “oh yeah, I need to study because getting into grad school is important to me”, instead of, “ARGH, THIS SUCKS. I HATE SCHOOL. WHY. WHYYYYY.”

(or well, it minimizes the latter thought to a faint whisper instead of the loud roar that it would have been, heh.)

If you want to eat a pizza, you’ve first got to slice it up! Same with goals. “Getting a better GPA” is huge. I’ve found that dividing a goal into manageable chunks makes the goal less lofty-feeling and scary, and easier to accomplish. By being more specific, small goals also conveniently turn into action steps, liking plotting a route on a map to your final destination.

This one I’m constantly guilty of. I feel like there are so many things I want to do that I try to do a bajillion things at once. But like there are psych studies showing that multi-tasking actually slows you down, so does trying to realize more than one goal at a time. As I’ve said, small goals are like action steps, and action steps turn into daily habits. I give myself a week deadline for each habit, and re-evaluate the habit at the beginning of the next week.

For example, my constant goal is to “be healthier!” Rather than trying to change my diet, exercise and everything else at once, I started with switching from drinking juice and pop to water and tea for a week. In the beginning of the second week, I realized that reaching for the tap has become second nature, so I started the next action step, which is to walk instead of taking the streetcar every day.

Things don’t always go as you plan, and I realized that it’s important not to beat yourself over it. Exercising regularly and keeping up readings are two big ones that I fail at, and I try to not think negatively by looking ahead. I let myself mope for a few minutes, and then take a deep breath and analyze why I failed.

Last semester, I tried to keep up with my readings by reading during my commute. That was an epic fail, and I realized that there were several reasons. Sleeping instead of reading because I’m so tired was a big one, but also little ones, like the friggin’ textbook being a giant brick that’s hard to hold if I have to stand the entire ride long. By analyzing what went wrong, I can revise my action steps and add new ones. This semester, I’m trying to get on the train a tad earlier than normal to skip rush hour so that I know I can get a seat.

I love Nike’s motto. Just do it. Just go, go, go. Don’t give yourself excuses to not do what you want. That’s what I tell myself when I need to kick myself into action: “C’MON. GOOO. STOP MAKING EXCUSES! YOU CAN DO ITTTTTT!”

Why yes, I yell at myself in all-caps.

Share with me your new year’s resolutions, dear readers! How do you keep your goals? What do you do to accomplish it? Tell me, I’d love to learn your tricks!