Empress Irene was playing hard to get.

I had been trying in vain to research this stealthy 8th century ruler of the Byzantine Empire for five days and I was coming up empty handed. Last year I had gone on a tour of the monolith that one of my professors affectionately refers to as “Fort Book”. The Robarts tour was informative and it had included a 45 minute workshop in e-resource search engines. So as I began my research, I purposefully typed Irene’s name into the scholars portal search engine. I employed all the steps that I had been taught. But, Irene was not materializing in cyber space.

Sometimes when I’m craving a sweet, I will look into my fridge over and over again in the vain hope that a tasty treat will become visible. I keep looking even though I have already looked in the fridge ten times. I think I’m hoping that a chocolate cake, will magically appear behine the mayo. After spending four hours late one night typing the same keywords into the search fields over and over again, I realized Empress Irene was no more likley to appear on my laptop screen than a cake was to appear in my fridge. I have been told the definition of insanity is doing the same thing over and over again and expecting different results. Empress Irene was driving me crazy. I knew I needed professional help.
I recalled being told about a service that is offered through the libraries, to help students do research for papers. I found the site to book a research consultation on the library’s main site,
It was two days later when I met with Dave Hagelaar at Kelly Library. Dave was great! I didn’t even have to explain to him who Empress Irene was. He was already well aware of her historical significance and the fact that she was a very cheeky Empress to research. 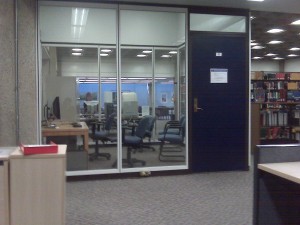 In my week of searching I had found one article about Irene. Dave found eighteen in a matter of minutes. I was unable to find any e-resources. Dave found five.

Dave is my new hero. He not only showed me that the articles existed, he also taught me how to find them. Did you know that if you leave the search field blank and press go, the search engine pulls from a much wider group of databases? I didn’t. Did you know that if you put an asterisk at the end of a word in a search field that the engine will pull up that word and every conceivable ending for that word that occurs within the database? I didn’t.

At one point, in trying to explain to him that my search had yielded only books, so excited was I that I couldn’t recall the word book. It came out something like this “all I can find are those bound paper thingies”! I’m not usually this dense…but in the dark, scary pit of researching an elusive historical figure, the blinding light of rescue is just that, blinding. The overwhelming relief I felt, coupled with the mental processing of new search methods left me short for words.

I am happy to say that I have now found Irene. She’s in my binder. It’s okay if she executes a successful escape because I now know where to find her.

Kelly Library’s research consultation service is brand new this year, so it’s not hard to get an appointment. But do it now…before word gets out about how great this resource is. Research consultations are available by appointment at most of the main libraries on campus. According to Dave, Kelly Library receives a mix of appointment requests from undergrad and grad students. So this resource is really for everybody.