Your College at U of T: UC

Happy post-Halloween, dear readers! I hope your chocolate/candy stash has been replenished for a short while. I think I have one Kit Kat left in my coat pocket. Anyway! Today, we have an interview with Jason MacIntyre, Coordinator of Student Life / Residence Life Coordinator at University College.

We have a very strong sense of history – after all, we’re the founding college at U of T. Student involvement is very high. Our Literary and Athletic Society (the UC Lit, for short) is the oldest democratically elected student group in Canada. We have no shortage of events, and there are lots of ways for students to get involved. Speaking from my experience at other universities – and I’ve worked at four others – usually, decisions are made by the administration, but here at University College, we work hard to involve our students in major decisions. Whether it’s hiring or policy decisions, or running events, more often than not, not only do we involve students in the process, but students are leading the process. There’s a strong sense of everyone who’s here wanting everyone to do their best and have the best possible experience… It’s hard to feel alone.


We also have the best couches on campus, in the JCR (Junior Common Room), and Diabolos’ is one of two locations on campus that serve fair trade coffee – any size for $1.


How does the selection process for the college work?
Students should indicate University College as their top preference on the application.

I think there’s a common perception that UC is a very inclusive environment, and I think that’s true. … I think that there’s probably a stereotype that tradition is very big here. My perception is that it’s partly true – there are a lot of time-valued traditions … but there’s always room for new tradition.


What are some of the clubs that are unique to your college?
We have the UC Waterdragons, which is our dragon boat team. There’s the Gryphon yearbook, and we have a student theatre troupe (the UC Follies) that performs every year. All U of T students are welcome to try out!


What resources are available for commuting students?
As upwards of 80% of our students are commuters and don’t live in residence, there’s a lot of people for whom we want to create an environment that is welcoming, (so that they) have all the necessary amenities like kitchen space, locker space, study space, etc. The Commuter Student Centre was built with a committee of staff, students and faculty, and the centre was very intentionally planned with commuters in mind. We also have commuter dons who work there to help commuter students out with school stuff, personal stuff, you name it. Within the UC Lit, there is an off-campus commission whose focus is programming and social events for students who live off-campus.

The other thing I should mention: We have a program in residence called the House Associate Program, where first-year students who life off-campus can actually sign up to be affiliated with one of the residence houses, so especially during orientation, students can meet other students who are living in residence. If the off-campus student becomes an associate, they can participate in house activities. We encourage intermingling between residence students and commuters – it’s one more way for students to make connections outside their immediate circle.


What about scholarships and bursaries at the college?
There’s money available at UC! There are several categories: we have 150 entrance scholarships that students are automatically considered for. The majority of those are awarded based on incoming average, but some also take into consideration financial need. University College uses U of T’s standard method for calculating financial need, which is basically the OSAP application process. Beyond first year, there are 400 in-course scholarships. Again, the majority of them are based on academic achievement and don’t require application. There are also financial-need awards based solely on financial need, and starting October 1 of each year, students can also apply directly for bursaries at the registrar. Finally, there are about 100 other awards that are for UC programs specifically.


What’s available to eat at the college?
There’s Diabolos’, that I mentioned already, Reznikoff’s Café (in the Morrison Hall residence building on St. George St.), and the college also run its own food services operation at the Howard Ferguson Dining Hall (a.k.a. Fung). Anyone can eat there, and as we don’t use contract food services, we have a wide range of stuff: we have a made-to-order cooking station, a sandwich station, hot grill, entrée items for lunch and dinner, and we have a lot of vegetarian, vegan, kosher and halal options. If students have any specific dietary needs, we’re happy to accommodate their request.

Are there college-affiliated paraphernalia and where do you get them?
UC Lit is the best source for UC clothing, and they have an office in the JCR.


What are the residences like?
Residences are all dorm-style and we have mostly single rooms, with some doubles. Thirty to seventy students live together in fifteen houses, which each have their own constitution, elections, special traditions and a strong history of student involvement and activity. It’s a very welcoming place to live. There’s also a residence council for students looking to get involved.


Why should students choose your college?
If a student wants to come to university and really learn about themselves and explore their options and who they are in the most open way possible, UC will be a good fit for them. We have a diverse student population and the college prides itself on being very inclusive, with lots of room to be who you are. The college’s programs are also a great reason to come here – they are well respected programs that aren’t offered at a lot of institutions. If you like history and architecture, you can spend a lot of time just exploring our building. No two of our wood carvings are alike! Finally, for students who want to be more involved or have past involvement in leadership, we have an awful lot of opportunities here.


Is there anything else you want to tell students about your college?
We have the U of T Art Centre here. It’s a gallery space for U of T, but UC is its home. It’s free admission, and the exhibits rotate every year. It’s a great way to spend a lunch hour. Also, Laidlaw Library is one of U of T’s smaller libraries, but it is a great quiet space to study.


Can we close off with a fun fact?
UC is a national historic site, and there are lots of legends and ghost stories that go along with the history of the college.

One of the interesting legends is about two men who worked as the stonemasons for the building: Diabolos fell in love with the woman Reznikoff was supposed to marry, and Diabolos convinced the woman to leave with him. The two men ended up confronting each other on the site and there was a physical altercation when Reznikoff went after Diabolos with an axe. The door at the front of the college has a groove from where the axe supposedly hit it instead of Diabolos.

As Reznikoff chased Diabolos around the college, they came to the tower and Diabolos shoved Reznikoff down the well where the circular staircase is. The ghost of Reznikoff was said to have haunted the college until the fire in 1890 that burned the college to the ground. When they were cleaning, they found a set of bones that were allegedly Reznikoff’s. They moved the bones to a decent grave and the college has been free of Reznikoff’s ghost since. Actually, our annual Fire Ball is held in commemoration of the 1890 fire, and our two food places are named after Reznikoff and Diabolos!

I don’t have class at UC, but I make at least two visits every year – the UC Book Sale is absolutely drool-worthy, and the annual U of T Career Fair is hosted here. It’s the only place with enough space to fill all the people who want a job and all the people who want to hire – but even then, at its peak, the place is still like the TTC during rush hour. 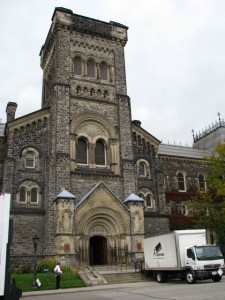 With its imposing structure and grand presence, it’s easy to feel lost at UC. Actually, it’s easy to get lost at UC, literally. The corridors are very similar, and it took me a lot longer than it should have to find both the quaint little registrar’s office (below) and Jason’s office, near the JCR. Granted, I carry a U of T map with me at all times because my sense of direction is like that of a deaf bat at night – moot – so you’ll have to take my experience with a grain of salt. 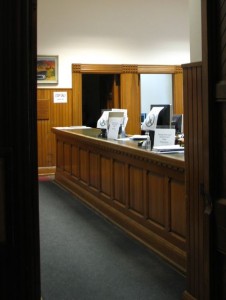 Nonetheless, I still managed to get to the JCR earlier than normal to experience their infamous couches first hand (askastudent chose UC based solely on the awesomeness of these couches!). And dear readers, they are comfy. They’re huge and red, and plushy enough to be pillow-like, but not plushy to the point of swallowing you. Perfect balance! 10.0! You don’t get a photo because it would be insulting for the couches to be experienced through pixels*.

* Never mind that I forgot to grab a photo before I ran for my next class at Wilson Hall.

UC has a beautiful quad inside; it’s a great place far from the hustle and bustle of the campus. In fact, BlogUT named it the fifth best make-out spot on campus! It has, and I quote, “a very peaceful, mysterious, woods-ey feel.” Couldn’t have described it better myself! (Just in case you’re wondering, BlogUT’s top make-out spot goes to the basement of New College. Zilch in terms of romance, but high marks for privacy!)

UC is absolutely gorgeous at night, and I recommend the Additional Pictures section on Wikipedia for a sample. Also, Flickr has a fab photo of both Reznikoff’s and Diabolos’ faces, and the legendary axe mark on the door: here.

And that’s UC for you! Do comment on your experience at UC, dear readers! Does the size of the college match the quantity and the quality of the social events? How’s rez life in Harry Potter-esque houses? I want to know!

Up to bat next Monday, Innis! Stay tuned!