“Uh, so what did I learn from humanities?” Mary gets a rock for Christmas

“So really, what’s the point?”

This is the question that creeps into my consciousness with frightening regularity. Particularly now that I’m finishing university and graduating with a specialist in history, without any palpable skills other than supposedly being able to think analytically and write using moderately good grammar. (Incomplete sentence).

So what is the point? I’ve been here for four years, have taken a myriad of classes on a bunch of thoroughly dead people, picked up a few polysyllabic words, and now am being thrust back out into the real world where not hiding in the parallel universe popularly known as U of T forces me to ask myself, “Why did I learn all that stuff?” It’s pretty harsh, but some days I think it’s true that in a lot of ways, the humanities are a little useless: I don’t know how to build a bridge or read an x-ray. I’m not going to get out of school and immediately jump into some high-paying job, my students loans becoming last night’s trivial bad dream.

I have my own reasons for studying what I do, and while sometimes I do regret having gone into history rather than something a little more practical (read: when I’m looking through the classifieds), there are also moments when I feel I have been privy to a world through which the ever-elusive past has built a fortress around the present, and has let me come inside; moments when my education in history can be directly exported into the real world.

Such an instance occurred when I received a rock for Christmas. It was a grey rock, and hard. It came directly from the Shetland Islands, the most northerly of Scottish isles. It was sent to me by some of my boyfriend’s relatives, crofters who heard that I had taken HIS362, a class on Hanseatic history. For those who are interested but unaware, the Hanseatic League was composed of a group of very active German traders working in the North Atlantic between the 12th and 16th centuries. They set up a trade monopoly that, at its peak, delivered goods between Scandinavia, Russia, and England, all in little medieval boats. (In time their ships evolved). The Hansa established trading houses, churches, even steelyards in the countries they visited: hence the rock for Christmas. Apparently, sometime between the 12th and 16th centuries, the Hansa came to Shetland and set up a trading house there too, made entirely of stone. My boyfriend’s uncle, a dry-stone dyke builder brought him one day to the ruins of the merchants’ lodging, now sitting on private property. The ruins are slowly being claimed by the ocean, but the larger part of the structure is still intact. He noted that the house had been built using dry-stone construction, and (being a rock proficient) he also pointed out that there were rocks included in the walls that were not native to Shetland. Meanwhile, a pile of rocks sits nearby at the mouth of a local Shetland estuary, and so it’s popularly believed that these foreign rocks were used as ballast on Hanseatic ships, brought from offshore and far-away trading posts. 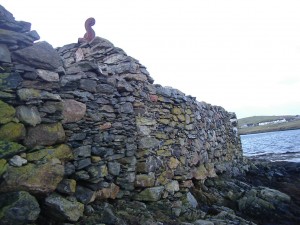 Upon hearing that I had a penchant for these German merchants, his relatives sought permission to send me one of the stones from the ruins (a stone which, by the way, had already fallen off the building’s crumbling walls and was about to be swallowed by the sea). It now sits, grey and hard, on the illustrious mantel of my fake fireplace. I like to imagine its fourteenth-century travels, from Novgorod down the chilly Volkhov in a Russian river boat, through the Gulf of Finland and into the Baltic and North Seas, finally to find itself, for six hundred years, sitting on a windy island among a bunch of people it could barely understand. (Those Shetland accents!)

I wrote my former professor upon opening my Christmas present, and he agreed that it was entirely possible that this was indeed an authentic ruin of a Hanseatic fort. These moments are a good reminder that, disconnected as I am from both the dead and the far-away, the past permeates the present, is not so alien as it often feels. While my education doesn’t qualify me for some amazing technical job, it has opened my eyes to the feats of our ancestors, and how they shaped where we are today. To the thousands of generations that have preceded us and which, for the time being, have culminated in the present moment: right here, right now- until we too fall into the historic past, remembered by the walls we have built, the words we have written, the stones we have carried.

4 comments on ““Uh, so what did I learn from humanities?” Mary gets a rock for Christmas”