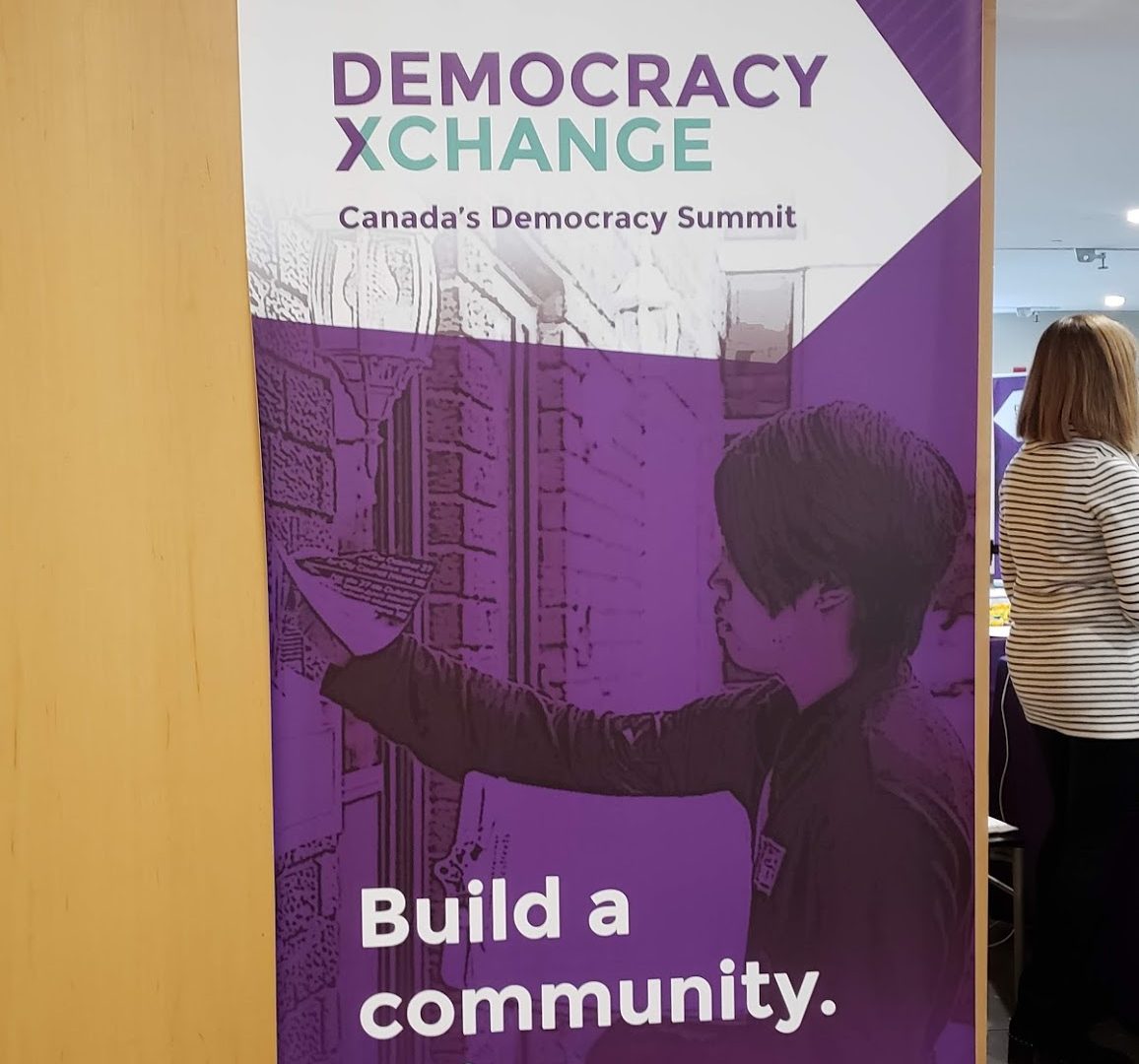 DemocracyXChange is an annual summit for Canada’s emerging democracy sector, consisting of various panels and presentations. Through my position at CCP, I was fortunate enough to attend and help out! I was at an open space event beforehand and then attended day one of the two day summit held at Ted Rogers School of Management at Ryerson University this past weekend.

The DXS Open Space event that I sat in on was about the “Great Lakes Canoe Journey Program”, a project that CCP’s Indigenous liaison worked on. The presenter was Sylvia Plain from Aamjiwnaang First Nation (also a former UofT alumni!) who discussed the importance of canoes to indigenous people and then showed us the projects that she and her team did to build canoes with a variety of different communities. It was very interesting to listen to and gave me more insight into an area that I knew very little about.

While I was helping out the UofT table at the DXS summit, I also got a chance to attend two panels. The first one was “Women, Power, and Intersectionality: Political Life Unplugged.” The panelists were a group of extremely diverse and influential women in the political sphere. They all shared unique insights and were coming from very different perspectives, which I appreciated.  Many of them stressed a few particular points that I strongly resonated with:

-It’s not enough to call yourself an ally of women or people of color. You have to be actively dedicated to giving them valuable representation.

-We need to get rid of this idea that all people from a particular minority are the same and have the same needs. Within any racial group, there are different cultures, different religions, different viewpoints. Within diversity, we find even more diversity!

-Change begins with children. We have to intentionally create schools/learning spaces where equity is a priority

-Time is of the essence. As a society, we are okay with small changes. But the people we are trying to save don’t often have the luxury of waiting.

The other panel that I went to was called “How and Why We Fight: Citizens In The Space of Protest”. This panel was much smaller but just as powerful. They discussed different types of protests, the role of social media, and the issues that people can run into when protesting. The panel included Rayne Fisher-Quann, a high school student activist who ran an enormous student protest regarding the Ontario sex-education curriculum less than a year ago. It was amazing to listen to her speak and it was so amazing to see a young person sitting on such a prominent panel and speaking about her experiences.

Overall, I came away from DemocracyXChange feeling incredibly empowered. It was a very inspiring energy to be around and I felt privileged to have been in the presence of so many driven people. It was a really positive experience and I highly recommend looking into Democracy XChange in the future so that you can attend in some capacity next year!

0 comments on “My Experience at DemocracyXChange”