The Importance of Taking Notes

Looking back to last year, I remember how I felt as I stepped back on campus after having been gone for several years.  It was nostalgic and very intimidating. I didn’t know if I had the chops to handle being a student again, but I did know that no matter what obstacles lay ahead for me, I had to see my goal of completing my degree accomplished.

My first week of classes weren’t too overwhelming as they were introductory classes to the courses I was taking. It was the next week that posed the real challenge. It became evident then that the biggest obstacle I would face would be relearning how to take notes effectively. I was so nervous about readjusting to student life that I somehow developed an illogical belief that every single word that came out of my professors’ mouths were equally valuable and free game for testing. I struggled as I tried to take notes verbatim, but this method of note-taking wasn’t conducive to retaining much of anything that was being said to me. Instead, for the first week of classes I had several pages of notes that mostly were comprised of incomplete thoughts: the product of fast speaking profs and my slow, slow fingers. 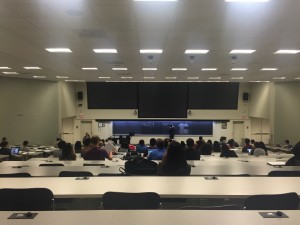 I started to realize that, for me, the most effective way to take notes was to actually  take thorough notes on the readings I did before lecture, and while in lecture only making note of new points and points that enhanced my understanding of the concepts rather than trying to transcribe the whole lecture. Doing this let me participate more actively in the material and allowed me to work on my next obstacle: being more interactive with my professors and classes during the lecture.

Having an understanding of how note-taking worked effectively for me allowed me to be successful in all the other aspects of returning to school that I was worried about. It became the foundation of my academic performance. I retained more from lectures and was a lot more engaged in the subject of my courses. Reading assignments became far more interesting and when it came to preparing papers, I had a good basis to formulate responses to essay questions which directed my research.

Exams became easier to prepare for as well because rather than relearning the material that I should have been retaining all along, I was genuinely revising. This left me more time to memorize key points and details that I needed to work on to excel at multiple choice questions. And since I was actively engaged in lectures, outlining my responses for short answer and essay questions became simpler because those questions, I’ve observed, were often based on points that were highly stressed during lectures. Recalling and providing support and evidence for my outlines to those questions also became simpler since my note-taking method required me to do the majority of the note-taking grunt work during the process of doing the readings before lectures. This habit left me with thoroughly detailed notes to study from without having to redo any of my readings before my exams.

So I guess that this year, by having a pretty solid note-taking strategy, I can be certain that the butterflies I’m experiencing is due to the sheer excitement of what I will learn and accomplish this year as opposed to nerves about how I will be able to handle the materials for my last 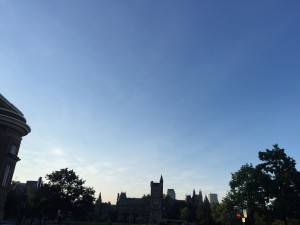 classes. This leaves me more time to prepare for what lies ahead for me after this year flutters by, because I know that just as quickly as the school season has approached, it will end in much the same way and I’ll need to brace myself for a new chapter in my life.

Leave a comment to let me know how you approach taking notes!