Gotta Snap ‘em All: mapping out your bank’s nearest branch and ATM 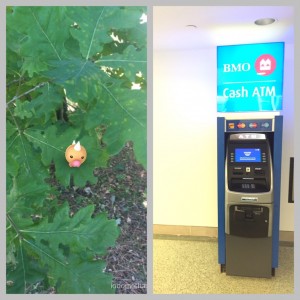 You see it all started with this wonderful idea that I had for a Snapchat story. I was going to map out the ATMs on campus that were affiliated with major banks and reveal their locations through the LifeatUofT Snapchat! It would be useful information and it would be quick to do because there at most was only four or five ATMs attached to major banks on campus, right? Besides, I thought I already knew where most of them were. Boy was I wrong. So when Sunday afternoon rolled in, I set out on my quest to map out ATMs via Snapchat. Everything was going swimmingly for the first few snaps. I had it in the bag, and of course I could already tell that the ATM snap story was going to be the best there ever was. In my head were visions of myself accepting the Oscar equivalent of Snapchat story awards, poised in my designer suit at the centre of “the people’s” thunderous applause, basking in the momentous recognition of my lifetime achievement– “I’d like to thank all the major banks…“–.  Everything was great, until I decided to stray from the plan and check an unmarked location to see if there was an ATM worth snapping about. I was pretty certain that checking this place was a waste of time, but instead what that location revealed, like a rare Vulpix, was a shiny major bank’s ATM ready for its close-up.

Clearly this must have been a one-off, I thought, but knowing that there was a one-off made me think of the possibilities of a two-off, and even worse, a three-off! What if there was a whole colony of major bank ATMs unbeknownst to me, peppered across the whole of St. George campus? That one ATM twisted everything I thought I knew about ATMs on campus and in that moment I was transformed into Cash Ketchum, my mission: to snap ‘em all (ATMs that is)!

And so for the next four hours, I combed through as much of St. George campus as one student could on any given Sunday. I walked in a grid like pattern and left no stone unturned. I stopped fellow students trying to return to their residences, pushing them for valuable information. I sifted through every college and asked as many staff members of buildings I had access to for detailed directions to the nearest ATMs that they knew of, even going as far as making them mark the location on a campus map. 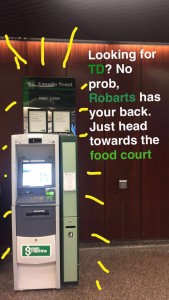 I took snap after snap of different ATMs at different angles, pairing them with catchy colour-coded captions. All while my phone’s battery drained at an exorbitant rate. In the end, did I snap ‘em all? I’m not sure, but I’m also not sure if anybody could really be sure of the answer to that.

What is important, however, is that my quest resulted in a pretty in depth list of where to find your bank’s ATMs and branch locations in and around campus to avoid paying service fees for cash withdrawals. If you haven’t added us to Snapchat (coughcough—ADD US, LifeatUofT, DO IT—coughcough) and didn’t see the snap story, here is the list that I put together:

All in all, I feel like I was able to put together a pretty solid list, but there were some buildings that I couldn’t access due to it being a Sunday. So if I’ve missed any, please kindly comment below and share the information with fellow students who may benefit from your wisdom and generosity.

Hopefully this is helpful and seriously, if you haven’t added us to Snapchat yet I highly suggest you do so. In fact, I’ll end this post with this lovely graphic: 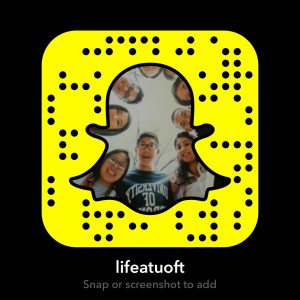 0 comments on “Gotta Snap ‘em All: mapping out your bank’s nearest branch and ATM”