So last week, I was helping out with Orientation activities, putting away tables around the lawn behind the UTSU building and (I hate to admit this, but) struggling with one particularly cumbersome table. With gritted teeth, I dragged it up the slope of the lawn and backed right into one of the rods of some strange looking white contraption on the grass. 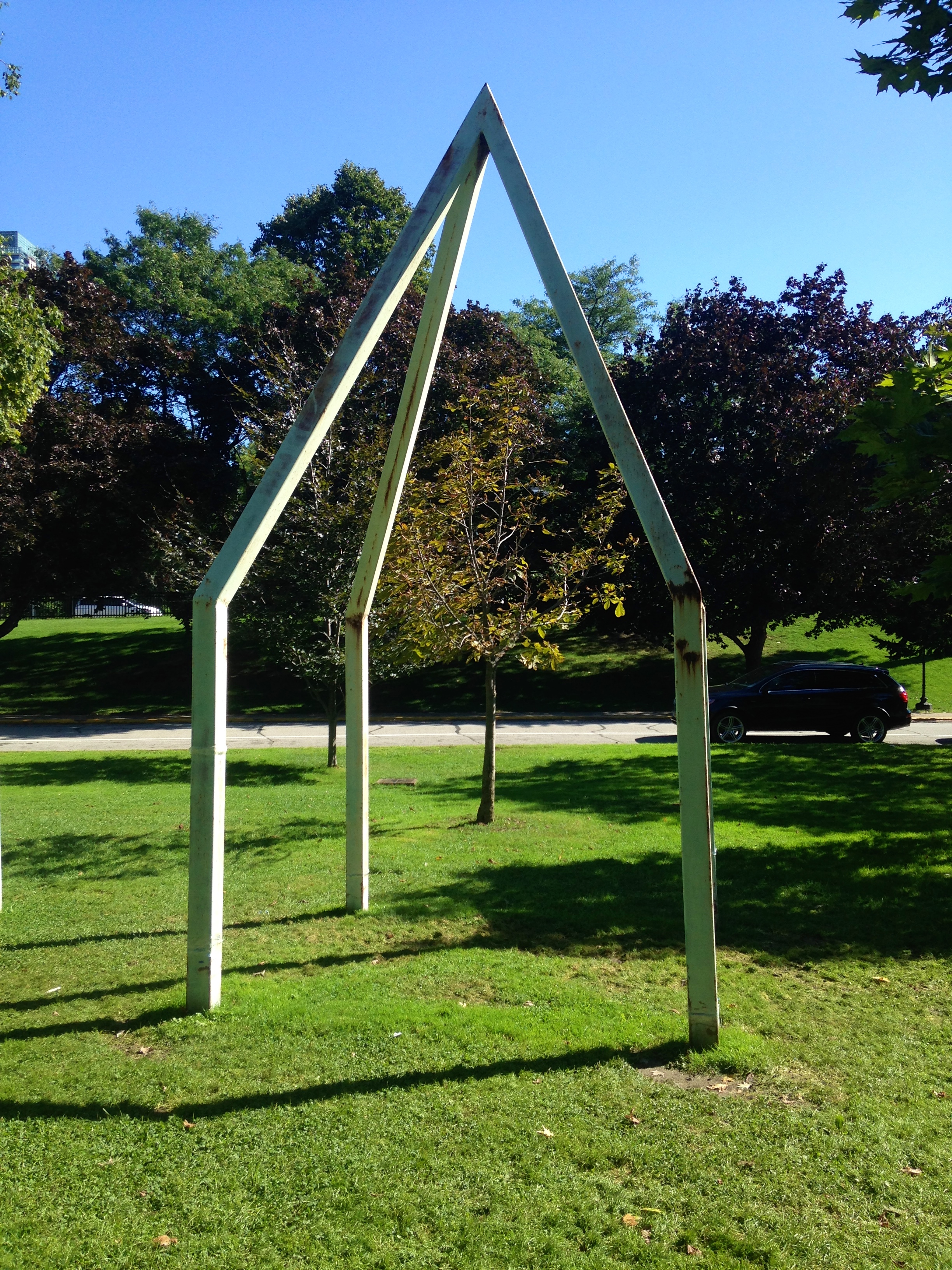 Rubbing my bruised back (which has now turned a brilliant shade of purple), I looked around for a plaque or an engraving or some sort of explanation but there was nothing and so slightly bemused, I went about my day and looked it up as soon as I got home (I may or may not have Googled ‘white sticks uoft utsu lawn meaning’).

Turns out, they’re actually an art piece by James Gillespie installed in 1984.

Yes- Art. I scoffed at the screen for a few seconds, but then read further and found out something interesting- so the artist actually positioned the tips of the structures so that if you stand in front of the shortest pole facing south and align all their tips together, you’ll see that they all point up towards the CN Tower. 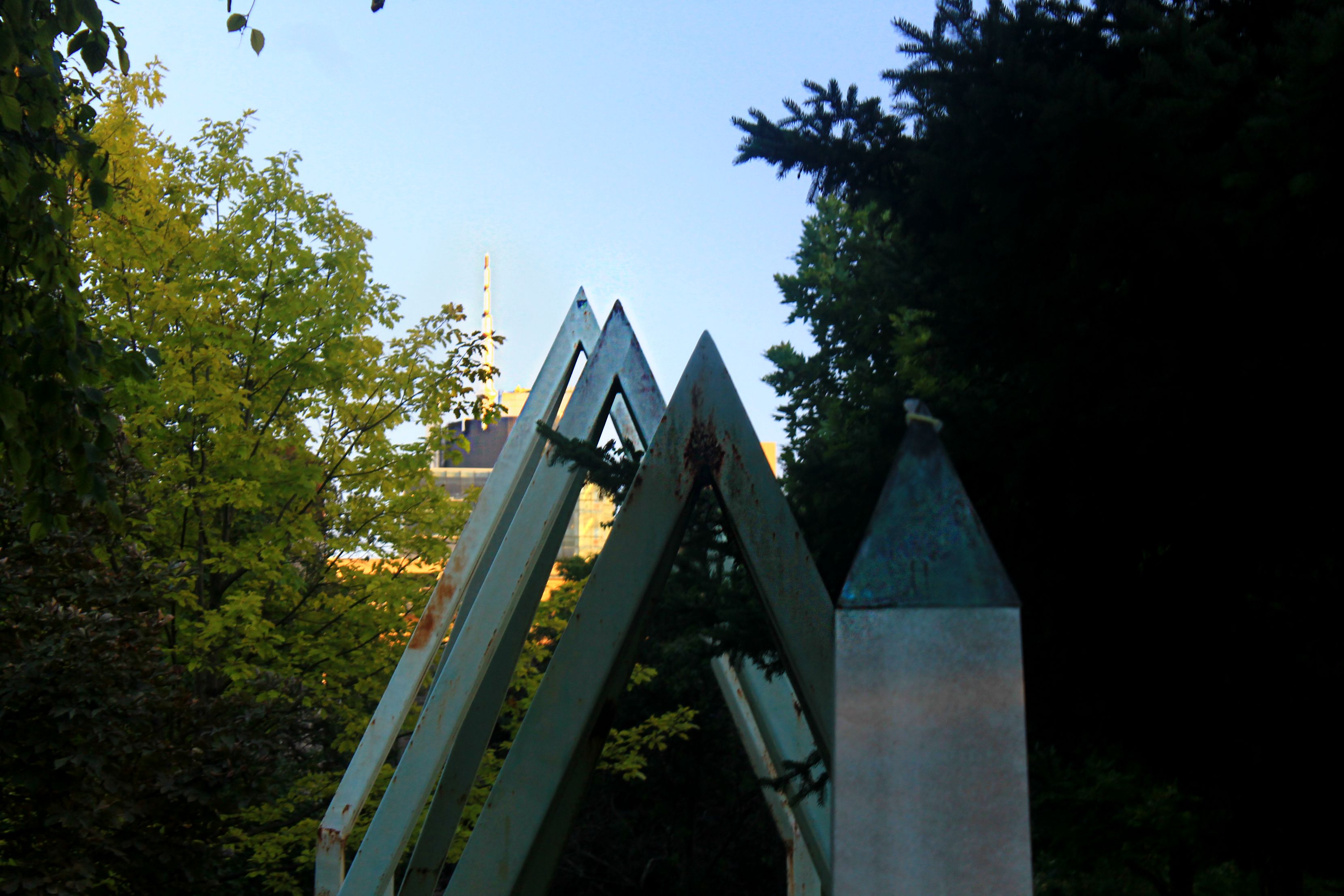 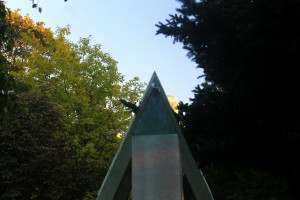 I think what the artist was trying to convey by connecting the ‘contemporary CN Tower’ with the more ‘ancient’ pyramid-like structures was not only the university’s rich history but also how U of T is linked to the world beyond campus and how important it is to look up at the bigger picture. That’s what I got out of it, at least.

This piece is dedicated to the students who died during the 1989 student uprising in Tianamen Square in China. 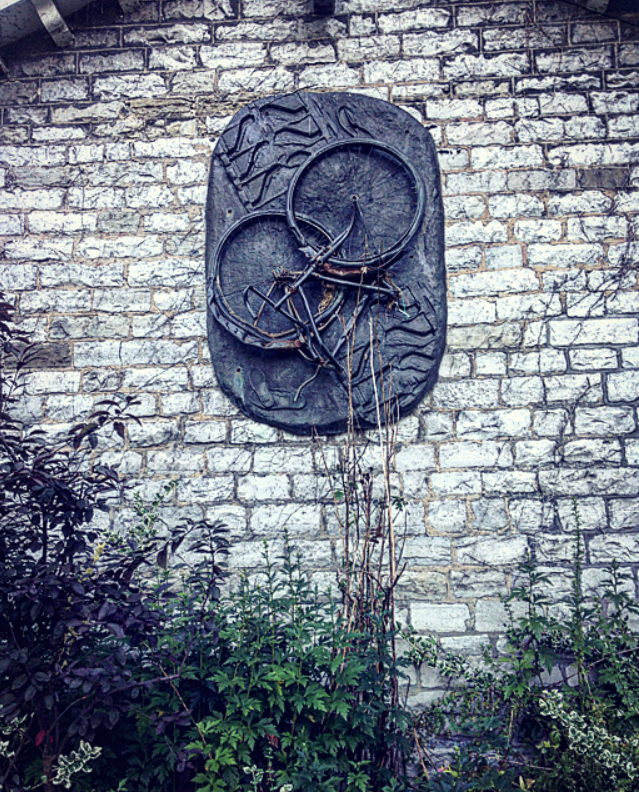 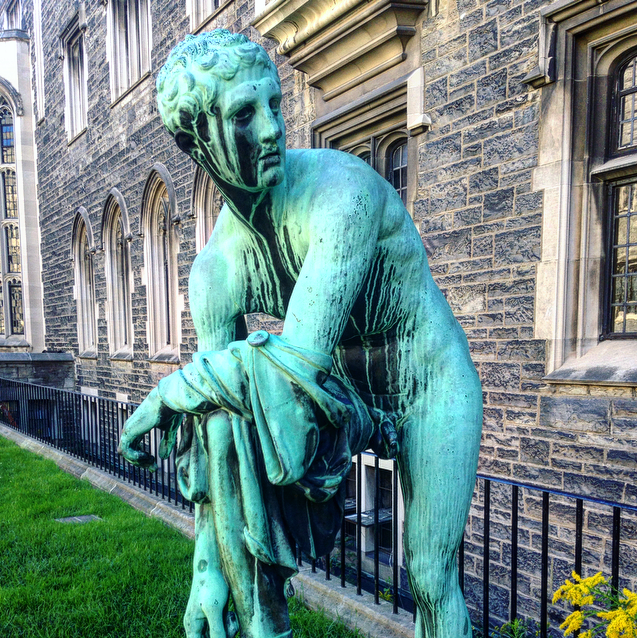 Location: near entrance of MedSci 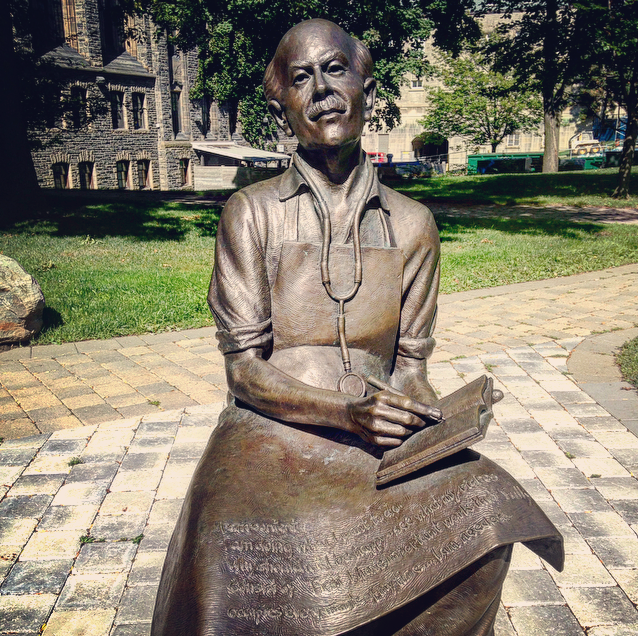 Bethune was a Canadian surgeon and politician, widely known in China for his contributions to wartime medicine. He spent the last years of his life treating soldiers on the battlefield in remote regions of China and brought modern medicine such as the mobile blood bank to chaotic field lines. It is said that because of how hard he worked during his time in China,  photographs of him at age 49 seem to depict a man in his 70s. Upon his death in 1939, he was personally paid tribute to by Mao Zhedong- and with multiple statues of him all over the country- remains one of the few Westerners of the time to be as widely celebrated in China.

Location: Southern side of Queen’s Park

One of many historical figures to be immortalized in statues around Queen’s Park, Simcoe was a British army officer and the first Lieutenant-Governor of Canada. He was first sent to America at the time of the War of Independence and known for his skill in the battlefield- but it was also in America that he wrote the first ever recorded Valentine’s Day letter- to an American girl called Sally Townsend. There’s more to that story, you can read about it here. 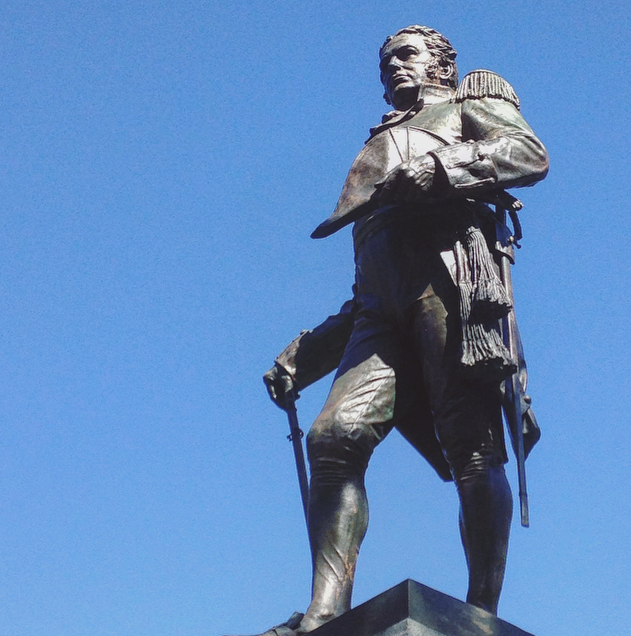 if you view this piece from different angles, you’ll see the profile of a man’s face shifting and looking out in different perspectives- quite fascinating 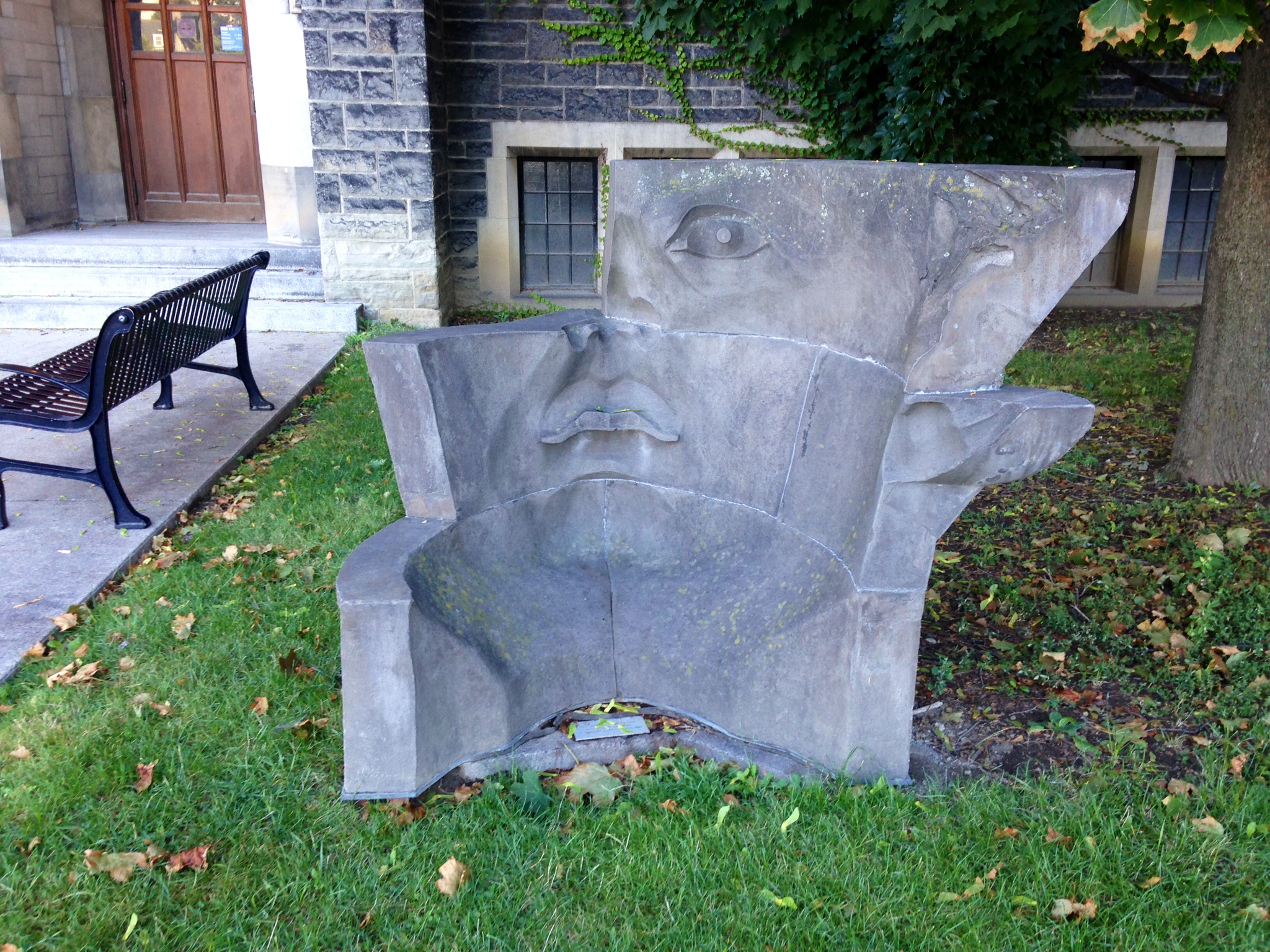 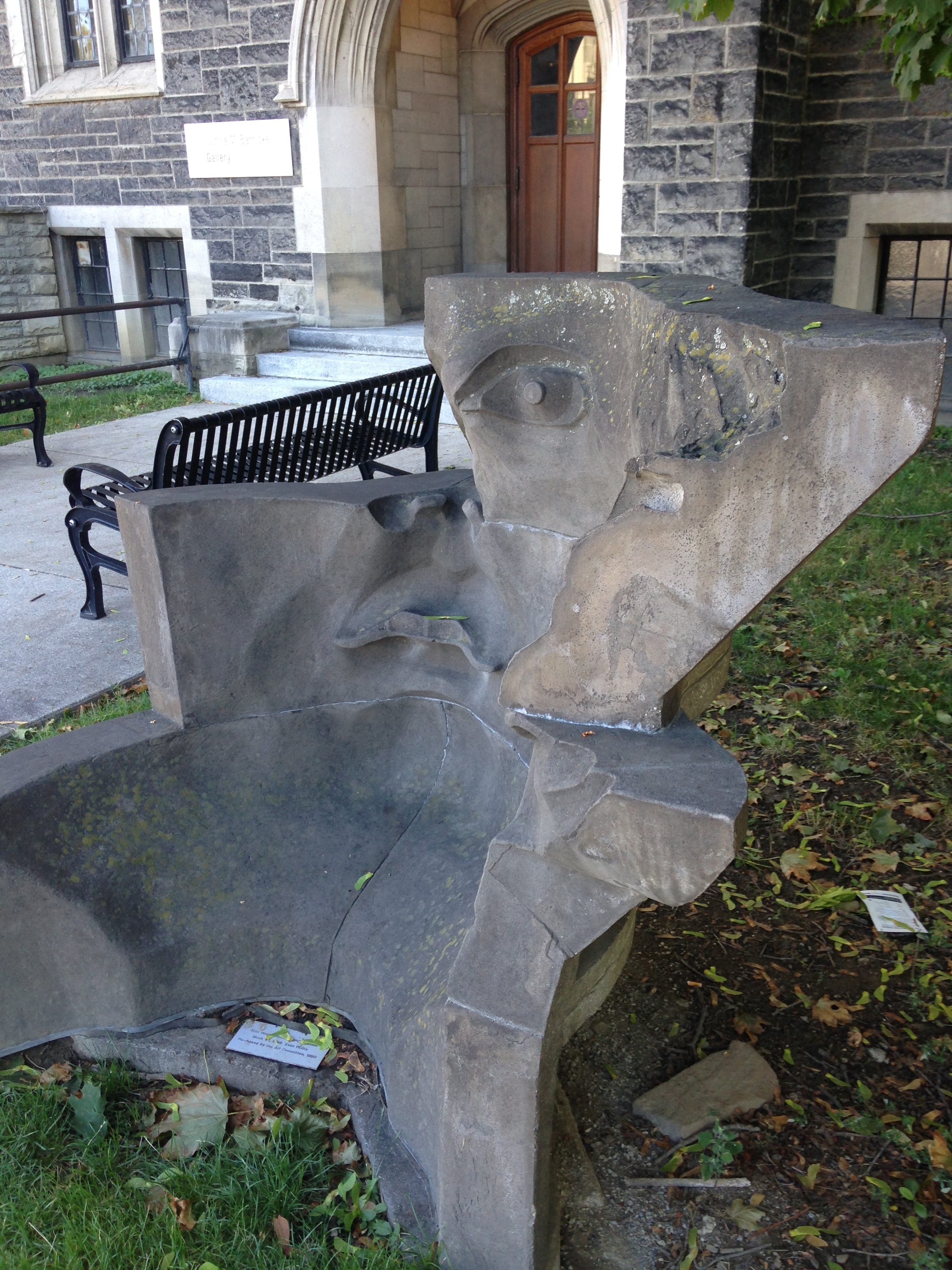 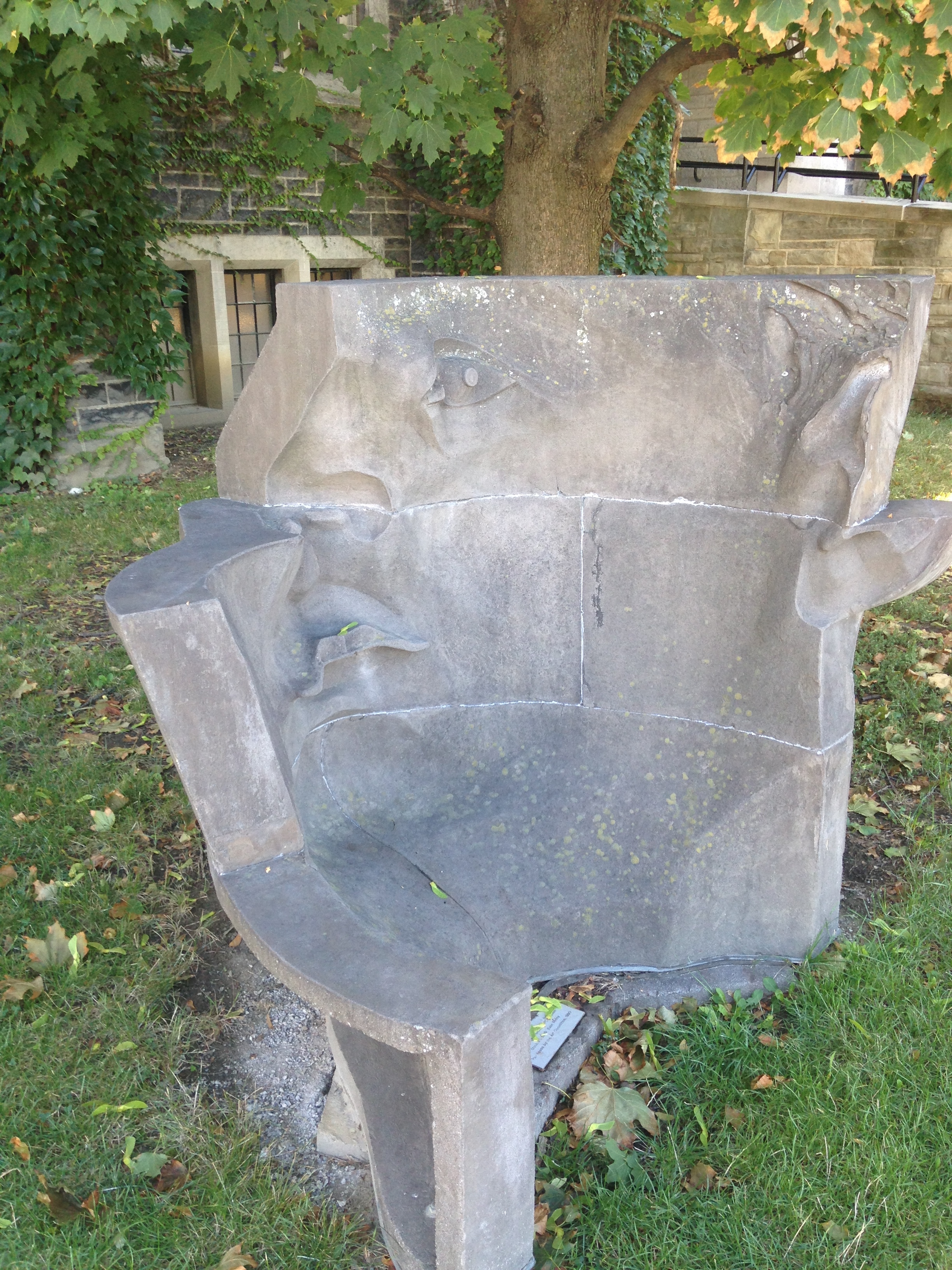 Businessman on a Horse, William McElcheran 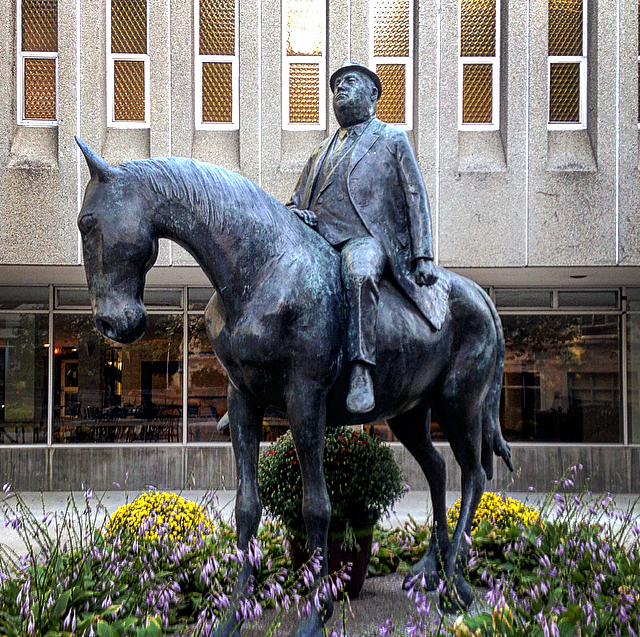 This piece depicts a portly gentleman with a haughty expression and his nose in the air, strangely enough-seated on a horse- something usually reserved for wartime heroes.

In this satiric piece, I think McElcheran is trying to highlight the narcissistic, self-indulgent attitudes of some in the corporate world who believe they are heroes when in reality, they are riding unpredictable horses without saddles or reigns, lucky not to be thrown off- much like riding the unpredictable ups and downs of the economy. 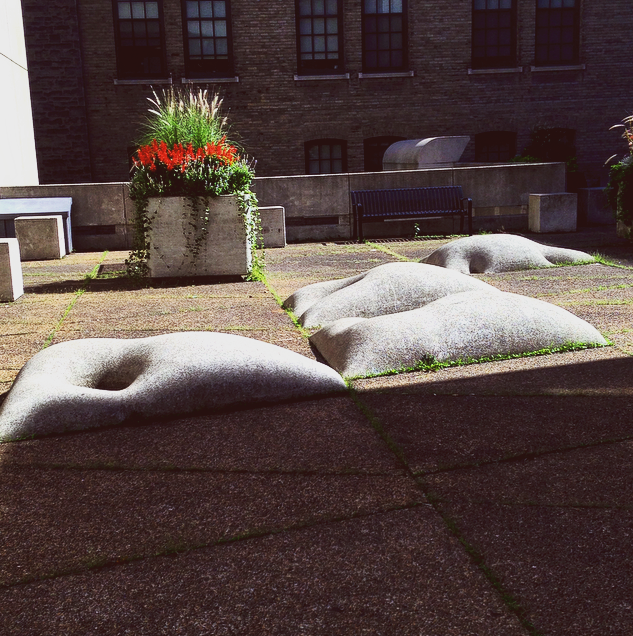 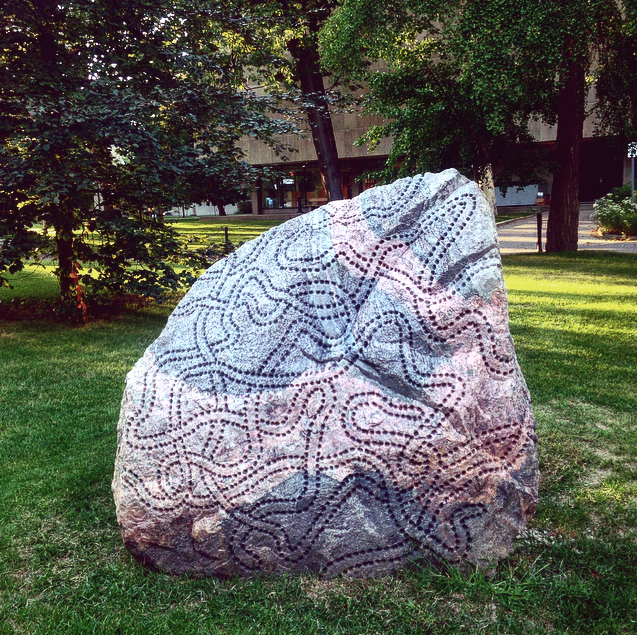 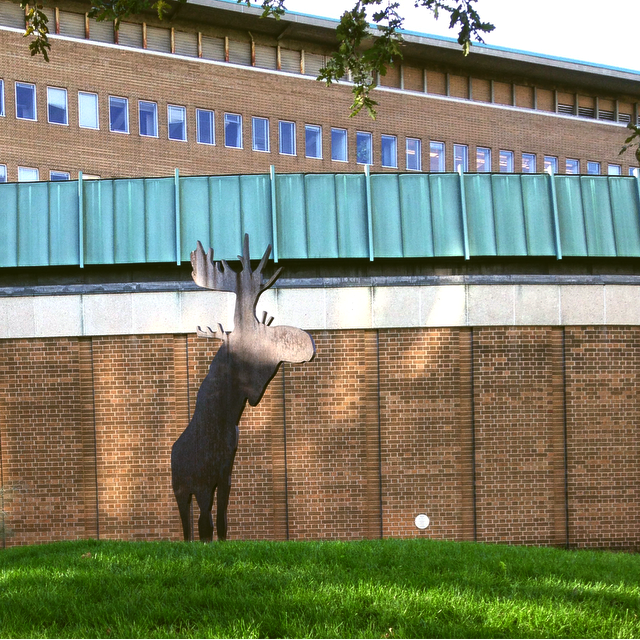 One book claims that the artist had hoped that the piece of art would become a meeting point for students, a ‘meet me at the moose’ kind of thing.

Sadly, that phrase has not yet found its way into U of T vocabulary….yet.

Walking around and discovering these pieces of art scattered around campus really made me realize that I ought to look up from my phone or my book once in a while and take in my surroundings. Art really does have fascinating stories to tell and some of these pieces (quite literally) left a mark on me.

I’m sure there are many more around campus and I’ll keep my eyes peeled. Until next time, U of T, enjoy wowing your friends with your knowledge of art history!