Just Exactly What is “Idle No More”?

You’ve most likely seen it in the news, heard it on the radio, or seen some form of media in the last 2-3 months on an Aboriginal Movement in Canada titled “Idle No More”. Is it just another First Nations protest? Is it simply an occupy movement? Or is it an entire national shift of Indigenous perspective from coast to coast? Regardless of what you have heard or read, I want to take a fresh approach to it from its very basic foundation, because as we all know, a movement such as this can very easily get caught up in bad media reports and articles of minor importance in relation to the actual cause/issues at hand.

Now first and foremost, its extremely hard to sum up an entire Indigenous movement in North America in one short sentence or post, but here is my attempt to do so.

In essence the “Idle No More” movement is actually the farthest thing from a “New” movement at all. Instead it is the latest national rebirth of a long running Aboriginal Resistance to the theft, pillage, destruction, and exploitation of the earth and Aboriginal land and resources from coast to coast. Furthermore the movement itself is not just about the Native community and their own interests, but rather concerned with environmental stability for all. It is concerned with protecting the land from entire exploitation and extraction, and is also working within the framework of the interests of all environmentalists, no matter the race or background. 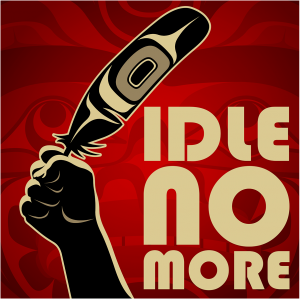 Those mobilized in support of the movement want to ensure that their children (Native or Non-Native), generations from now, have an earth to inherit. It isn’t simply and solely about “First Nations Rights” (though of course this has been the centrepiece of attention and commotion, and is a large aspect of the movement), but the rights of all people to keep the earth clean for future generations.

Every movement though does need a spark, an ignition point; for “Idle No More” this was the Harper Government’s introduction of Bill C-45 this last November. This large omnibus bill was set to weaken the environmental protection laws in Canada and allow more Government access through significant changes in the Indian Act to land management on Aboriginal land, as well as reserve control. Furthermore it would reduce the protection of millions of lakes and river’s throughout Canada, and would thus be subject to resource extraction and pollution.

Sprouting from the debate over Bill C-45 came united protests coinciding with the similar protests already underway in provinces such as British Columbia over the Northern Gateway and Pacific Trails pipelines. The protests coincided with Chief Theresa Spence of the Attawapiskat First Nation’s announcement of a hunger strike for the purpose of demanding a meeting with Prime Minister Harper and the Governor General of Canada to discuss the future of Aboriginal rights within the country.

On January 11th, 2013 the meeting did in fact take place, where not only Chief Spence attended, but also Assembly of First Nations (AFN) members, various Chiefs, and leader of the AFN Shawn Atleo. The organization of the meeting saw preparations for more protesting based upon the exclusion of many First Nations band representation as well as the agenda being created by the Harper Government and solely representing their interests.

The meeting itself did not take on the pressing issues of treaty rights and implementation as well as comprehensive land claims, but did promise to do so in the future with “high level” dialogue between the Prime Minister and Aboriginal representation.

The movement is still going strong, with protests and public talks being organized every week from coast to coast in many rural and urban centres, and universities across Canada, including of course right here at the U of T (some links to media coverage are included below).

What the future holds for #Idlenomore and Aboriginal Rights in Canada is unclear, but one thing is certain: The movement isn’t slowing down, and it seems that decisions are going to need to be made very soon. Either way there are many more demonstrations, as well as much ” high level” dialogue to take place in the near future.

0 comments on “Just Exactly What is “Idle No More”?”